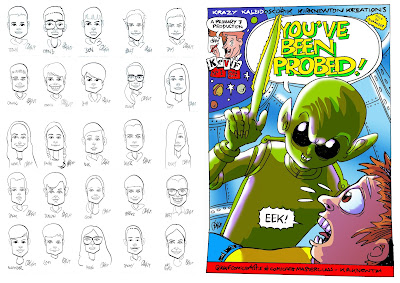 This week, for all five days, I did classes with Kirknewton Primary School near Edinburgh, just in the morning, and all from the back room. It's part of a project whereby I'll be taking the strips they've drawn and assembling them into an 8 page printed comic. And it's all on a theme of local history which, beautifully, they've already swotted up on in advance which meant they knew what they wanted to do before we started. As a result I abandoned some usual features of my class, in particular the "Celebrity Treads On A Worm" demonstration strip, in favour of looking at particular things they needed to draw for their strips. I may do more of this as it's actually very constructive and productive, if slightly less of a comedy show. To begin with, Primary 7 did the story of an alien abduction, which is genuinely part of local history and, obviously, a joy for them to get creative with. 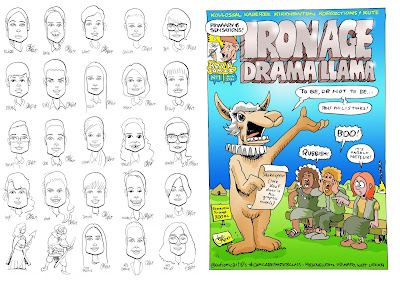 On day two, Primary 6 did the Iron Age, which you'd have thought was a much drier subject than yesterday's alien abduction, but they got well into it. Especially because so many of them wanted to draw a war between the locals and a rival tribe. 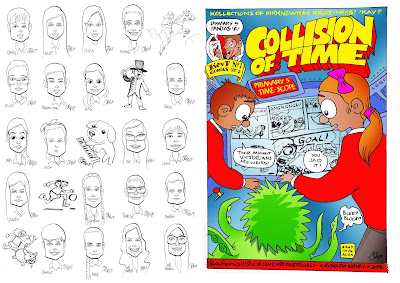 Day three was described to me as Games Day, which I thought meant Primary 5 had being doing games when they should have been thinking up a history topic. But no, there was a local games event in Kirknewton, started in the 19th century, which included pig racing and other novelties. It's a shame that I only have 8 pages to squeeze all their stuff into, because I've been sent their original art to scan and pick from, and there's nearly 30 pages from every class. That's nearly 150 pages I have to reduce to just 8! That's next week's job. 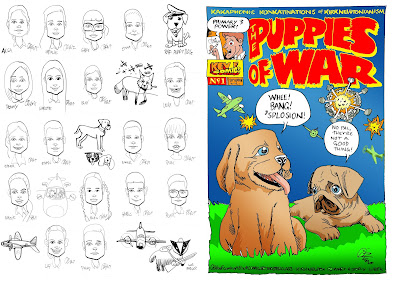 Day 4 was Primary 3. That is, in England terms, Year 2. The infants. Kids too young to do my class usually, but I was happy to include them in this project. So it was a surprise that the topic they'd chosen was World War 2. Quite how you broach the subject of war, and the RAF (who had a base at Kirknewton, whose story includes bombings and plane crashes) with 6 year olds I don't know. Well, I do know, cos the teacher decided they should actually just do animals and how they'd deal with the war. So puppy dogs it was. This comic title is actually a bit of a cheat, cos I came up with the title - something I never do. There just wasn't the time or the realistic possibility of them doing it (we were having the worst technical issues with this unfortunate class.)
Did I mention this week was all being done on Skype For Business, rather than Zoom? So, as well as having no ability to "pin" or "spotlight" peoples pictures, they couldn't even see a full screen image of me. For reason we could never fathom, every class was just seeing a square picture of me, so a quarter of my screen was missing on either side. Why is every online technology worse than Zoom? And why has someone forced schools to use the naff substandard bad tech? 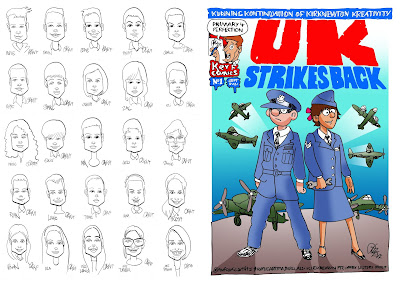 Day 5 was Primary 4 doing World War 2 again, this time with an emphasis on the local RAF base. So lots of planes and uniforms. In all these classes I was doing special drawing for the kids, for use as reference, before the 10.30 break, and emailing it to the teacher to print out, so the kids had it to use from 11 am. This worked beautifully except for Thursday's P3 where it wasn't until the class was over that I discovered the images hadn't sent so they'd been working blind. That really was an unfortunate group. 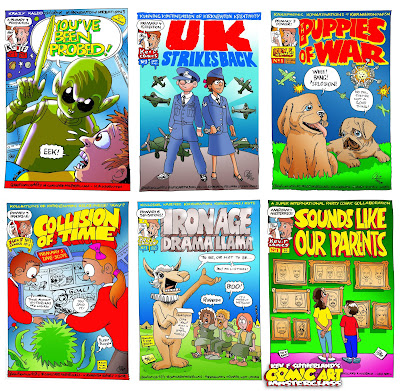 The sixth comic cover you see here was the product of a Saturday morning online birthday party class, the second in a week, booked by the folks who run Class Bento. As with the previous week's class for them, some guests were in the UK and some were in Australia, so this took place at 11 in the morning. The celebrity they chose for my demonstration strip was Borat.