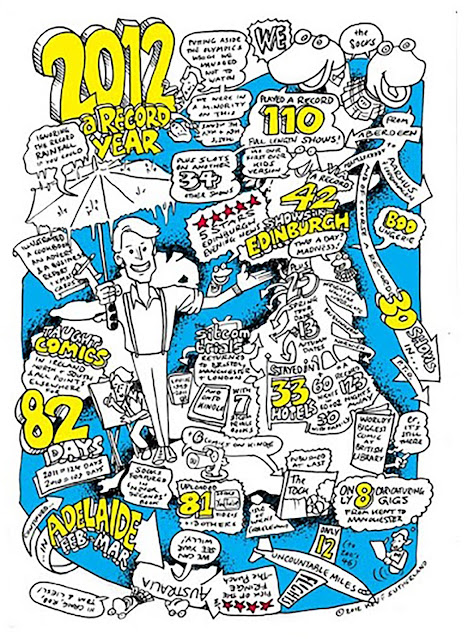 And if that don't tell you all about our 2012, then I'll probably have to go back over it and write out the details so you can read them. For the time being, enjoy the pretty picture.

If you can't make it all out, this picture records that in 2012 the Scottish Falsetto Sock Puppet Theatre played a record 110 full length shows (mostly an hour, some 90 minutes) inc 42 shows at Edinburgh (2 a day), 38 tour dates, 30 days at the Adelaide Fringe plus 34 slots on stand up and variety bills.

I stayed in 33 hotels, plus 60 nights in our flats in Adelaide and Edinburgh and 30 nights with my family (10 with my sister's family, 17 with my Mum, 2 with Val & Rosie in Aberdeen and 1 with Hev's parents in Bodelwyddan) giving me a record 123 nights away from home.

The picture also mentions the Socks 81 videos, including the Never Seconds song which got mentioned in a book, my 13 Amazon Kindle publications including the appearance at last of The Tock, the return of The Sitcom Trials to Bristol, Manchester & London, the appearance of the World's Biggest Comic at the British Library (I really must collect it soon, it's been there since February), Louise's funeral in January, and the few illustration jobs I squeezed into the year (not enough comics this year, has to be said).

I'm sure I've missed a lot (I haven't detailed anything Heather got up to, which suggests her own review of the year will be worth looking out for) and as for what went on in the rest of the world, clearly I wasn't paying attention. Hope your 2012 was just as full. Here's to 2013 everybody.