Brand new from the Scottish Falsetto Sock Puppet Theatre, a look at the current FIFA scandal. 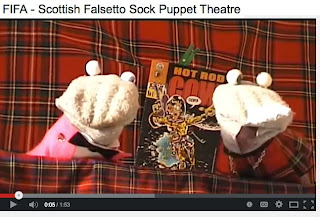 Posted by Scottish Falsetto Sock Puppet Theatre (and Kev F the comic artist) at 20:54 No comments:

Though it'll soon be wrapped round tomorrow's chips (in a parallel universe in my head where people still wrap chips in newsprint) the story making today's headlines is that FIFA is corrupt, that Qatar bribed other countries with brown envelopes stuffed with $40,000 dollars to win the World Cup, and that Sepp Blatter knew all about it and is a lying coverer-upperer. Since I know little and care less about football, this doesn't surprise me in the least.

What has amused me is the rather feeble means protestors seem to have at their disposal. The top of the Top Tweets when you type in FIFA right now reads "Unhappy with Fifa? Tell the Fifa sponsors: @CocaCola @Sony @McDonalds @adidasUS @Hyundai @CastrolUSA" via @GrantWahl. Tell on them to their sponsors? In what distant corner of whose deluded mind did those sponsors suddenly grow a massive conscience? Coca Cola? An April 2004 report from a fact-finding delegation headed by New York City Council Member Hiram Monserrate contends:
“To date, there have been a total of 179 major human rights violations of Coca-Cola's workers, including nine murders." And that's just in one country.

Sony planted a virus in everyone's computers in 2005.

McDonalds? Where to start... McDonalds Legal Cases has its own Wikipedia page

Adidas made jackboots for the Nazis in the war,in the 90s they were owned by a crook, Tapie, imprisoned for match fixing, (all on Wikipedia) and they are still accused of using sweatshop labour

Hyundai's chairman was imprisoned for bribery & embezzlement in 2006, and so was his son, another suspect killed himself

All of which qualifies them to be perfect bedfellows for the corrupt, exclusive and elusive FIFA, but makes none of them the person I'd run to first if I was looking for someone who'll always do the right thing and report it to the proper authorities.

Posted by Scottish Falsetto Sock Puppet Theatre (and Kev F the comic artist) at 11:15 No comments:

That's me all over

Idly typing my name into Google I keep turning up appearances of me and my work online. When I remember to, I update my Wikipedia page with these references, and link them to the text as "inline citations". Vain as this might be, I don't see anyone else rushing to do it, and it seems the best way to keep a tab on these things. Here are the latest mentions I've found of me and my Comic Art Masterclasses: An interview and photos on Burgess Hill School For Girls' website

Photos from a school visit back in 2007, Waycroft Primary Bristol

Photo and article on Get Wokingham, covering visit to Rivermead Primary, Reading

Montage of caricatures by me of kids at Bishop Sutton Primary, Bath

St Osmund's Catholic Primary School, and some photos that show me how bad my hair looks from behind

Posted by Scottish Falsetto Sock Puppet Theatre (and Kev F the comic artist) at 21:40 No comments:

Hi, Kev F here. You might know me as the bloke who used to run the Comic Festival in Bristol, and who writes and draws for The Beano, Doctor Who Adventures, Match and others.

I'm looking for an artist, or artists, to help me finish a comic that's been lying dormant for longer than many of you have been alive. In 1994 I wrote and drew an 8 page photocopied comic called Captain Clevedon (see below). He's a superhero based in the town where I live, and it's a comedy action strip intended for a wide audience, from kids to adults. Its initial run sold out in the town itself back in the day, and even got featured on local TV (cheesy, ain't it?) but I never progressed with it after that first taster issue.

It's always been a popular character that people bring up in conversation, and lots would like to see his story finished, but I can never quite find the time. Added to which my comic art style has crystallised as much more cartoony than I think suits this book.

So, I'm looking for a superhero artist to help me complete it. I have the script plotted and almost complete for a 24 page self-contained first story (In which Captain Clevedon learns more about his powers of Enhanced Benevolence and defeats the Severn Boar/stroke/Sky Pig From Space). Who'd like to draw it?

The caveat is that this is, most likely, not a money-making venture. I wrote and drew the original for love (and the vast profit from its sellout first run, which added up to less than fifty quid, spread over more than a year) and would expect this issue to not make big money. However I would offer any collaborators an agreed profit-share, in the event of the comic taking off, and would split all sales pro rata (eg Comic Convention sales, Indy Planet online sales, plus you could get cost price copies via Ka-Blam to sell yourself). This project is ideally suited to an up-and-coming artist who wants to use their pages to boost their portfolio of superhero art. And, by the way, the end product will be fun to read. And when they option it to make a movie we'll all get to go to a party (that last bit is not guaranteed, by the way).

Below is the original short story from 1994. The new 24 pager will not be in the same cramped comedy style with 4 bubbles to a panel, 6 panels to a page, but will be in a more familiar superhero comic layout. Lots of splash pages and fight scenes, with flying, action, monsters, machinery and superhero posing. I plan to publish it as a black and white comic, to keep it affordable to the kids.

If you are interested in drawing this comic, send a link to some online samples to me at kevf.sutherland@virgin.net. Please don't email art as attachments. Looking forward to working with you.

Posted by Scottish Falsetto Sock Puppet Theatre (and Kev F the comic artist) at 15:48 No comments:

Check this out. Surely this man is the biggest poser in comics? Yes, that's me. And I'll be answering questions in a webchat for BBC Northern Ireland next week. The photo, which isn't the one I usually put out to publicise my comics work, is me in Aarhus in Denmark last month. I put the camera on timer and posed, how sad is that? Laura from the BBCNI website found it on Facebook and obviously thought it looked the part, so there I am. Also available for catalogue shoots.

Get your questions on comics sent in now, all welcomed.

Posted by Scottish Falsetto Sock Puppet Theatre (and Kev F the comic artist) at 12:03 No comments:

Can I Have My Apple Back Please? Comics by kids

My, but I've been busy preaching comics to kids in my Comic Art Masterclasses. Here are some of the recent front covers from their productions, from schools in Dublin, Birmingham, Kidderminster, Wiltshire, and elsewhere.

I travel all round the country, nay the world, teaching kids how to draw comics. By the end of a morning or afternoon they've produced a comic to take home and I've drawn their faces. If you'd like me to come to teach your kids, please don't hesitate to get in touch.

Tonight's Eastenders is as-live in one shot. It's Rope on a soap. (Remember where you read that first)

Posted by Scottish Falsetto Sock Puppet Theatre (and Kev F the comic artist) at 21:07 No comments: