Socks Do Shakespeare - the show itself 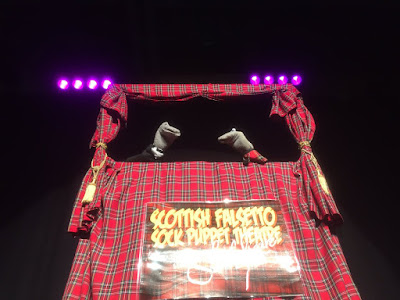 Thanks to Jim R on Twitter for this view from the front row at the Gilded Balloon 2016.


For the first time ever, I think, the show we performed on the last night of our Edinburgh run (and the show we'll be taking on tour) had the same running order and content as the first night of the run, albeit it had got sharper, slicker, and some funnier gags had grown around it, including some laughs that came just from knowing when to leave a pregnant pause. Here's the retrospective introspective rundown, for the record.

INTRO - DOUBLET & HOSE. It's great to be able to open the show with a routine that demonstrates the Socks' style and characters, without having to fall back on old familiar material. Everyone appreciates a strong opener like this, not the least regular Socks fans, and of course me.

I'M A SOCK. As always, this song is the testing ground, during which I can usually tell who's never seen the Socks before (they'll laugh at lines like "on your cock" and at the guitar solo) and who are regulars (they'll only laugh at fresh ad libs)

SHALL I COMPARE THEE. Another strong opening routine, ideal for introducing the Socks' relationship to new viewers. We played this at things like Fast Fringe, and it's as good as a new Halloween.


APART FROM... This got shortened a lot during the previews, the version we did in Brighton in May was nearly twice as long. Works well and, being a poem, occasionally gets a round of applause at the end.

HOW WE MET. The most elaborate prop of the show, and during the previews I was worried it just wasn't funny enough. But a bit of editing, a bit of timing, and crucially the "can I swap seats with you?" adlib, and we had a winner. It grew a coda, the line "a 3 minute conversation with a really disappointing punchline" which would get the closing laugh, if the punchline itself hadn't.

F UP SOME SHAKESPEARE. A good strong song, rounding up the first third of the show beautifully, and working nicely in the overall structure of the show (once I gave it a payback later). Verse two's rhymes aren't as funny as verse one, and I always meant to rewrite them, but never did. It's a song, so it gets applause as well as good laughs.

AN ACTOR PREPARES. Brilliant. And to think I hadn't even remembered this stand-alone Youtube routine when I started doing the previews. It has everything, audience interaction, performability, gag after gag, and a simple but perfect punchline.

SHAKESPEARIAN INSULTS. Follows on beautifully from Actor Prepares, keeps the laughs going, delivers some good Shakespeare lines, and has the best pause of the show (after "you know those Dogs Of War..?". At first we just went straight in with the punchline, but I soon found the longer pause gave us the bigger the laugh, as the gag dawns on more and more people).

GIRLS & BOYS. The gags leading up to this ("Get your Lute" etc) are lovely, then the song itself, despite being the loudest since 2013's Fireball, gets great laughs of recognition, both of Blur and the Shakespeare tropes. 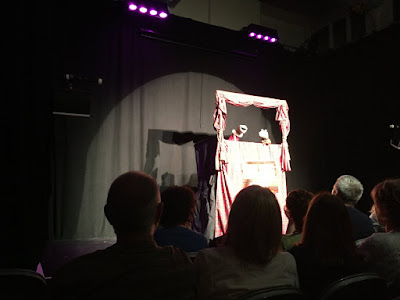 RICHARD III. Our star centrepiece. Probably the best central play we've had in any show. Coming, as it does, in two parts, the brand new "Now" routine came into its own after a few tentative previews, becoming a matter of looks and timing. The second best pause of the show, which only developed in the last week of the run, is when we're anticipating Sock On The Right's opening raspberry, and he pauses, thinks, pulls faces, then finally delivers it. On the Saturday night, this got a minute of laughs from the sellout audience. Then part two "Kingdom For A Horse", which began life in Leicester 3 years ago, got even better as the physicality of the "sorry can you hold this" part (when each Sock tries to talk while holding a reindeer in his mouth) took over. The adlibs about the audience laughing at the hump, and then the armour, came about spontaneously and turned out to work every night.

TITUS ANDRONICUS. Managed to make the start to this seem spontaneous most nights, and got good laughs from what is probably the groaniest of the night's material, by dint of it also having some of the best throwaway Shakespeare.

KNOCK KNOCK EQUIVOCATOR. A good un, that the audience think is going one way, then it goes another, in the classic Socks list format (which I have discovered recently, thanks to reruns on Drama, that I appear to have lifted from The Likely Lads. Give a good home to an old format, say I). Then it segues beautifully into..


OH MR PORTER. Quality song, groany punchlines throughout notwithstanding (and, by the way, the Banquo and Horatio gags are corkers that, I bet, Tim Vine would have loved to have come up with), and I'm very proud of the fact that we do an entire Toby Belch & Andrew Aguecheek routine intact, and get a laugh. This is what the show is all about.

CYMBELINE. Very good, very funny. The only routine that got a significant edit during the run, chopping the last paragraph off it so it ended on the best laugh.

OTHELLO. Also got better through the run as we realised the "layers of costume" were where the actual comedy was, not in the lines. Then the song - IAGO SONG - becomes part of the same physical routine and ends perfectly.

FALLING OUT ROUTINE. Flows from Othello, grew some lovely new adlibs as it went along, then wasted no time getting into...

LOVE STORY. Who knew that banjo (last seen in 2014's Mumford & Sock) would have a second lease on life? And we finally get Taylor Swift into the show (after an aborted attempt to do a version of We Are Never Getting Back Together into Socks In Space in 2013), though it seems nobody recognises the song. Whatever, it's the perfect moment of pathos, including a callback to How We Met, and launching us straight into...

ROMEO AND JULIET. The classic routine, originally performed in our 2007 show, comes back with new costumes and some lovely new laughs. And, crucially, a new ending, thanks to Balthazar and a final bit of "You don't know how it's done and don't pretend you do" physicality.

Best show ever, and I'm looking forward to taking it out on tour.

The Scottish Falsetto Sock Puppet Theatre do Shakespeare played at the Gilded Balloon at the Edinburgh Fringe August 2016.