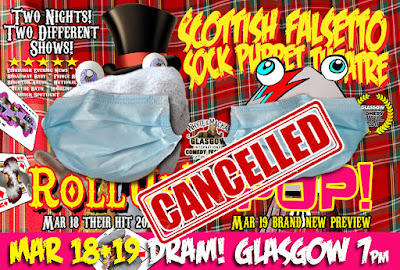 May you live in interesting times, they say. And blimey, it's getting interesting right now and no mistake. This week was when the coronavirus pandemic really started to kick in. And while most of the country is busying itself panic-buying bogroll, those of us who make their living travelling nationally and internationally to deliver freelance classes and comedy shows are looking at big gaps opening up in their diaries.

On Monday morning I woke up, in my hotel room in Boroughbridge North Yorkshire, thinking about how the virus spreads, and realising the sweaty venues of the Edinburgh Fringe are probably the worst places to be inviting punters in to in August. As a result of which thoughts, I vacillated for a bit long, and missed Wednesday's "early bird" deadline to put The Socks' show in the programme and get it on sale. At the moment it's unclear how the virus will have spread by August, and the chances are things will be fine by then (thanks to this "herd immunity" all the kids are talking about). But really, who knows? I have a few more weeks before I have to make the decision. So far the biggest looming loss is our Edinburgh flat, on which we're told we can't get the deposit back unless they can re-sell it.

However some decisions were easier to make, and some will be made for me. This coming week's shows in Glasgow are off. Scotland's clamping down on big events, and right now getting in a plane and stirring the pot of Bristol and Glasgow's germs seemed like the wrong thing to do. Also ticket sales had not been going up fast, and I'm reading endless stories of cancelled gigs and no-show audiences, so Glasgow is cancelled for this year.

@BristolAirport
parking - refund in under a minute

@British_Airways
flight - refund in about a minute Medium marks to:

@easyJet
- transfer to new flight for £5 But minus marks to

@premierinn
who won't change their 14-day cancellation policy or even let you move your booking to a later date. Boo hiss #PremierInn, today's #villains

(Since I wrote that tweet, Premier Inn have messaged me and it looks like they may be changing their policy, after quite a lot of punters posted similar complaints.)

And my first school cancellation was, not surprisingly, my visit the week after next to Hannover. The German government have closed schools and clamped down on flights, so this was obviously not going to happen. Meanwhile a question mark hangs over my next month's schedule. Lets place our bets shall we? What will become of:

Then April has classes and shows that may or may not happen in Salisbury, Bath, Hatfield, Lechlade, Dublin (that'll be cancelled, for sure for sure), Great Yarmouth, Littlehampton and Birmingham.

I am going to be putting my efforts into selling Findlay Macbeth, which goes to the printers tomorrow. And, taking my lead from Shakespeare himself, if I have a month free I might just did what the lad himself did when he was quarantined away from London to avoid the plague. He wrote King Lear, I might just have to write myself another blooming book. (Says the bloke who's flukily raised enough on Kickstarter to cover the printing of his first book, but will need to sell a few hundred more to make it anything approaching a profitable activity). 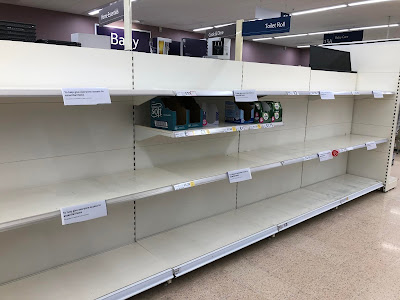 Can’t think of a Shakespearean gag about toilet paper. Aye, there’s the rub.

I'm surprised FlyBe has been brought down by Coronavirus. I thought it was just a carrier.

Does this virus attack your ability to spell? In the course of a few days we've had #panickbuying - there's no k in panic - and now #coronapocolypse. The word is spelled apocalypse. Morans!

Looking at a potential raft of cancelled previews, who's thinking of retitling their Edinburgh show "Work Still In Progress"?

Have I just invented a new conspiracy theory? Covid-19 lives for longer on plastic bank notes than paper ones. There, you can have that one for free.

(Extra clue: you could Buy them or Seez them)