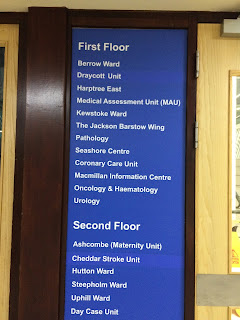 This was as close as I came to taking a photo of Hev in hospital, she wasn't feeling very photogenic. What a very different weekend this was. When Hev went to the MAU.

For me the sick weekend began with me getting food poisoning at a school in Ealing on Wednesday. I blame the veggie burger at the school lunch (though I'm assured no-one else was ill). I threw up in the toilets before I left. Then, half an hour down the road at the next services, I parked up and could get no further than getting out of my car before I'd thrown up, quite copiously, all over the car park. Not pleasant. I made it home via a couple of snooze rests. But that was that for my little illness.

Meanwhile Hev had been feeling unwell for some time. She'd been sweating overnight, but then who hadn't (it's been a particularly humid June), and had been throwing up a little. But she seemed to be recovering. My suggestions that she should go to the Doctor were dismissed as she didn't think it was that bad. But by Friday morning she really was clearly getting no better. Still throwing up and unable to keep water down, and with a temperature, I rang up the Doctor to get an emergency appointment (at first the receptionist suggested we could see the Doctor in a week's time, till I pointed out it was more of an emergency than that) and we waited for the Duty Doctor to ring back.

Expecting to come away from the Doctor's appointment at 3-o'clockish in the afternoon with a prescription for some pills and/or potions, imagine our surprise when Hev emerged saying we had to drive straight to A&E in Weston. She had a temperature at a troublingly high level and went through all the tests they had going, from bloods to x-rays to ultrasound, and was in for an overnight stay.

In all she remained in the Medical Assessment Unit for three nights and most of Monday, getting a course of intravenous antibiotics to treat a urinary tract infection, and a saline drip to rehydrate her, the infection having gone to her kidneys, so they'd not been doing their job for a while. By Monday she was stable and able to be discharged.

The great thing about the MAU, as opposed to other wards, is that visitors are able to go in from quite early in the day (10.30) and stay till 8 at night, and fortuitously Hev was in over the weekend, and I'd had a day off the road in Friday, so I was able to stay with her all day, fetching provisions from home and the shops, and generally, I hope, being of some help as a bedside companion.

I really ought to leave it to her to tell you the tales of the other patients in her ward, including Jabba The Hut with the Heather Robinsonesque breathing contraption, and the midnight nurse from hell. I couldn't do justice to these tales told second hand.

When finally we got her home on Monday night, I was at last able to tell the world (we didn't want to worry her Mum & Dad until she was in the clear) and lovely thoughts came back in droves via Facebook:

Sarah Dumphy Some of these I would like to know what they are!

Simonetta Avossa Carvell Take it easy Heather. I hope that you are feeling better soon. xx
Unlike · Reply · 1 · June 15 at 10:55pm

Audrey Tweed Lovely to see all your get well messages,,always in my thoughts Mums xx
Unlike · Reply · 2 · June 16 at 9:20am

Heather Tweed Thank you lovely people for all wishes. Been catching up with old Netfix films in my 'get better nest'! Up & about today, starting to feel human again! Just about to start a book about Art & Money in 19th Century Britain for a little light reading ; ) love Heather xxxxxxx
Unlike · Reply · 3 · June 16 at 10:51am

Pat Bissett · 3 mutual friends
,so sorry to hear what a bad time you have had Heather,hope that now you are home you make a speedy recovery, sure your loving husband will give you all the necessary T L C. That you will need. !! Best wishes. Pat (Montrose)
Unlike · Reply · 1 · June 16 at 7:21pm