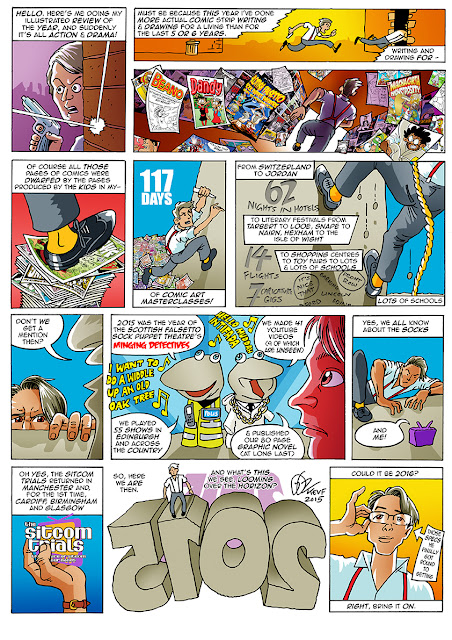 Yes, it's that time again. I'm looking back at the year gone by, and once more it's all me me me. (Elsewhere on the blog I've looked back at the telly I've watched, and the comics the kids have made in the Comic Art Masterclasses, and I'm sure I've mentioned Hev enough. If not, she's been working on her book all year and being generally brilliant). When I started doing an illustrated review of the year, in 2010, I did it on a side of A4, at Mum's house, on New Year's eve and just rattled it off for a bit of fun. I've somehow managed to tie up the best part of a day and a half on it this year, the fool that I am. And if it's a bit hard to see as a full page, here it is blow by blow. 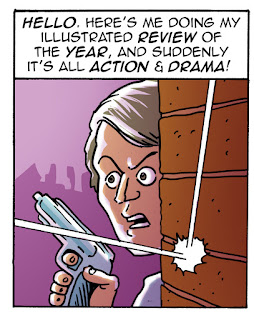 The comics I'm referring to here are the scripts for the Beano Annual 2017, for which I've written all the Bash Street Kids, Bananaman and Gnasher stories, and the Dandy Annual 2017 for which I've written and drawn the all-character Strictly and Bake-Off parodies, and sundry bits and bobs across the year; The Socks' "Goes To Hollywood" 80 page graphic novel, which finally came out in December, just 7 years after the first volume; the Magna Carta comics for Barking and Lincoln, published by Art Reach; and the work for Bible Society, which continues into 2016 with some very interesting stuff on my desk waiting to be looked at. I've even included a Christmas card commission, and the promo cartoons for the Socks' Minging Detectives show into this montage. It's stuff like this that can make a page take all day. 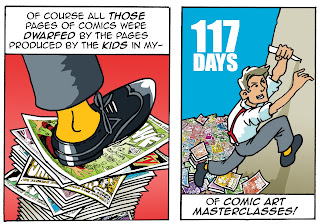 The Comic Art Masterclasses are detailed throughout this blog and looked back on in detail. The half-hearted reference to 127 Days probably doesn't work. I haven't seen the movie, I know it involves rock climbing, let's gloss over the attempted homage there shall we? 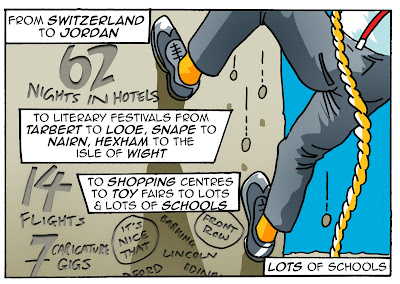 These stats are what my cartoon-of-the-year usually centres round. The dreadful damage I do to the environment with all my flying, which I did a lot less of this year despite the trips to Amman and Geneva, and my many nights away from home (I've not included the Edinburgh month or domestic visits in this total, which between them meant 3 months not sleeping in my own bed). You want the year-by-year comparison table? You got it.

The Socks had another busy year, though to be honest it wasn't as busy as others because we lined up a shorter spring tour. And, though I love lots of Minging Detectives, it left us with fewer knockout songs and drop dead brilliant routines that will go into the permanent repertoire, and was never quite as satisfying as its three immediate predecessors. Not every show can be Socks In Space, though I remain delighted by the Socks' ability to divide a room with their Isis song, "Hello Muddah, Intifada". At no point in the last year was it never not "too soon". The 9 unseen videos referred to, by the way, were part of a series of commissioned videos that are currently on hold. You may get to see them in the new year (and we get paid for them!). Oh yeah, the graphic novel. It's 80 pages, full colour, great value, and available now! 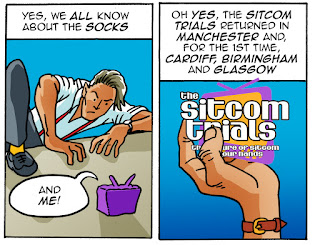 I don't mention The Sitcom Trials much on this blog, because it has a blog of its own, but it did indeed have its busiest year since 2013, and is planning a busier one next year.

Hev saw me artworking that final panel and asked "who's that supposed to be?" We can conclude from that that I am neither as young nor as slim as my self-portrait suggests. All the more reason, I would say, for producing an illustrated review of my year, than relying on photos, all of which seem to involve a plumper, more wrinkled-bloke wearing the same clothes as me (including my new glasses, for which I finally got my eyes tested this year) and stepping in front of the camera just at the wrong moment.

Happy New Year when it comes