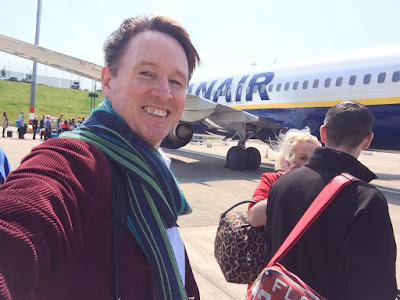 1pm: "After only 5 hrs delay we're boarding @Ryanair FR505 from @OfficialBRS From @bhx_official ! May be late for work"

There is stiff competition this week between Ireland and Romania. Forget the Eurovision Song Contest, in my little world this is a much bigger contest. The two countries are bidding for the title of Most Unnecessarily Complcated School Visits of the year.

Bucharest, which was a wonderful trip, at a school who have been lovely and helpful throughout, has been having fun with paying me. First I had to provide a Certficate of Tax Residency from HMRC, which I applied for. After a couple of weeks HMRC replied to tell me I'd applied incorrectly (the form asked which period I wanted this to cover, I gave the period I would be working in Romania, they replied that you couldn't apply for a period in the future. But we eventually got that through, after I'd returned). Then this week they tell me I've got that Certificate in my own name, but I've billed under my company name, so I need to bill again under my own name. Then they send me a form which they'd said, while `I was there, that I didn't need to sign, which I now need to and... blah blah blah, more to-ing and fro-ing of paperwork than any visit ever.

But Dublin is rivalling all that with its travel complications.

It all started with a school in Wexford who want me to come. I'm delighted to, but in order to get there, i need to fly to Dublin so the only sensible thing is to organise a Dublin school in the same visit. That way I can land at 9am, drive to a Dublin school for the day, then I have time for my 2 hour drive to Wexford ready for the following day's school.

So I put out the shout to schools, and i get a booking. It'll be Thursday in Dublin & Friday in Wexford. I book the flights and they're dirt cheap, only £35 return.

Then I get a reply from another school, who can take me on the Tuesday. Bonus. Even if the Wednesday is left empty, it's worth me moving my flights and having 4 days in Ireland for 3 days work. I move my flight, at a cost of £30.

Sadly the Tuesday school has to cancel, which is a pain, and not something I can bill them for. I move the flight back to where it started, with another £30 charge. Yes, I've paid £60 to move flights that only cost £35 in the first place.

Then when I get to Bristol airport this morning (hi, it's Thursday morning as I write) I realise that, what with moving flights and all,  I've forgotten to pre-book my parking (for the first time in years) so this'll be my most expensive parking.

Still, all looks good for our 8am flight. Though, to be  honest, it is a little foggy out there. I was just admiring the effect of the airport being cut off by a wall of white when we got the message that our flight had been diverted. The fog wouldn't allow it to land in Bristol, so it's gone to Birmingham instead. And so, if we want to get on it, must we passengers.

So it is that it's 9.51am, and I'm on a bus that's crawling through Bedminster on its way to the motorway and thence to Birmingham airport to get a flight that, if we're really lucky, might leave Birmingham at 12.30, in which case I'd be in Dublin by 1.30, picking up my hire car by 2, and arriving at my school on the other side of Dublin on this side of 3pm. If I'm lucky.

I am assuming today's visit to St Kevin's College in Crumlin won't be happening. But by golly I should be in plenty of time to start work in Wexford tomorrow morning. Let us see how things go shall we?

11.30 - still on coach, just past the turn for Shilrey. School have suggested rebooking me for next Wednesday. New flights and hotel might scrape in at £120, which added to today's share of travel means I could still turn a profit on the trip. Though I would, as the saying goes, make more money auctioning dogs. 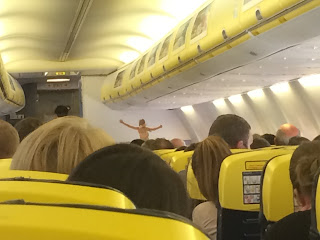 From today's @ryanair flight. Why's there a crucified Jesus at the end of the plane? Ah, get a photo of him anyway.

By 1.30 we were on the plane waiting for passengers to arrive. And half an hour later, or long enough for me to read two copies of Shortlist from cover to cover (wondered where all the female journalists had got to before realising it's a Bloke Mag. Who knew there was still such a thing. Do only men fly? Weird) we were still waiting. We eventually took off, and landed in Dublin at just after 3pm, which would have been just about time for me to finish teaching at St Kevins. In the meantime, via text, we'd arranged for me to visit them next Wednesday instead, so the day wasn't totally lost.

Now all I had to do was pick up my hire car and I'd be away. 3.30 I got to Thrifty to pick up my pre-booked car. 4.30 I finally drove away with my totally newly-booked car having found, after being shunted between Thrifty and their neighbour Sixt, through both of whom I'd somehow booked and amended the booking for this car twice already. And don't get me started on the insurance deposit they "don't take" from your credit card but they need to "secure" from your credit card. Can you imagine how much money they need to ring fence on your credit card?

€1600!!! That's well over a thousand pounds. If you don't have a grand free on your credit card - as two couples queuing in front of me (at the two desks of the two companies I had to wait at) didn't - you were stuffed. Added to this was a £300 deposit, and the comparatively meagre £50 for the car hire itself, and there's £1500 on my credit card that I can't use (for how long I can't imagine). None of us remember seeing that on the forms when we booked, and it certainly wasn't mentioned on the paperwork I had with me. (That's for the smallest car. People hiring people carriers were being asked for 3 grand security.) Very luckily I was able to do it, but you can be sure I'll be taking the bus when I come next week.

Following all that, the two hour drive to my hotel in Wexford, ready for tomorrow morning's school was a doddle. But bloody hell. Having expected to get to a school in Dublin to maybe start work by 10am, I ended up turning up for an 8am flight and getting to my destination at 7pm. I could literally have got to LA in that time!

I'm watching Eurovision and having a pint, and I don't care who knows it.
PS: Friday went swimmingly, I did my school and drove back to the airport and flew home with no problems. Once home I reached into my travel bag to get something and sliced the tip of my thumb on my upturned shaving razor. Very much one of those weeks.

Kev F Sutherland, as well as writing and drawing for The Beano, Marvel, Doctor Who et al, runs Comic Art Masterclasses in schools, libraries and art centres. After a morning or an afternoon every pupil goes away with a photocopied comic containing a strip by every single one of them, and an individual caricature by Kev F. Please email for details, and follow him on Facebook and Twitter. View the promo video
Posted by Scottish Falsetto Sock Puppet Theatre (and Kev F the comic artist) at 21:25