A 5 STAR REVIEW from Brighton Argus for Sunday's Socks do Shakespeare preview at Komedia? That'll do nicely. 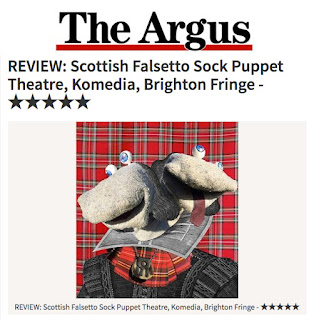 Shakespeare performed by sock puppets? Romeo and Juliet as a comedy? The famed sock puppet theatre from the mind of Kev F. Sutherland previewed its latest show in a one-off spectacular.

In celebration of Shakespeare’s 400th anniversary, the Scottish Falsetto Sock Puppet Theatre delivered unique and humorous interpretations of the famous plays through jokes, arguments and songs.

It was performed to an enthusiastic audience in the intimate venue, which added to the charm of the performance. No children attended, which surprised even Sutherland.

There were opposing characterisations, the puppets were like chalk and cheese; one attempted to act straight while the other couldn’t be serious.

The ‘costume’ changes throughout were slick, given it was just Sutherland on stage, apart from one malfunction during Romeo & Juliet that caused roars of laughter.

It was just silliness and classic comedy inspired humour that kept everyone entertained, while Meta moments enhanced the absurdity.

The performance had an improvisational quality, but Sutherland clearly knew his Shakespeare knowledge and managed to make it accessible, contemporary and ridiculous through the banter between the two sock puppets.

It is not a deep or meaningful show, but humour for humour’s sake, and that is what makes it so enjoyable.

The Scottish Falsetto Sock Puppet Theatre do Shakespeare at the Edinburgh Fringe August 2016 - see the previews in your town!