A fab 4 STAR review for last night's Socks Do Shakespeare preview at the Old Joint Stock in Birmingham from What's On Midlands' Heather Kincaid. Many thanks! 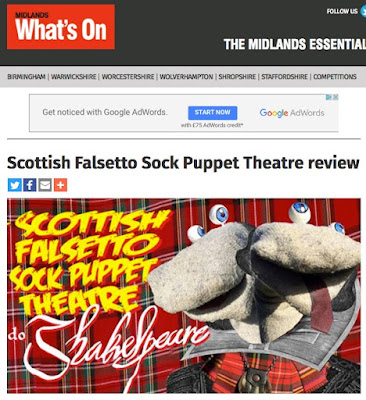 Best known for their bastardisations of classic movies, cult TV shows and topical debates, this year, Scotland's most high-pitched singing socks sink their toes into some high art and history with a timely show to celebrate our country's greatest poet, William Sockspeare.

Part of a series of pre-Fringe previews, the Old Joint Stock show saw the googly-eyed puppets perform their own unique versions of some of Shakespeare's greatest works – or at least saw one of them attempt to. If you're worried that it's all a little English for Scottish socks in these times of referenda and rift and tension between our nations, then you've yet to see Tybalt as a leather-clad Glaswegian hard man. Or rather sock.

Interestingly, the Scottish Play is one they barely touch on, but there are cracking takes on Richard III – revised and updated to include an instant dinner – Othello – complete with crisps – and Cymbeline – the story of a chap called Ian who isn't all that bright. As ever though, it's at least in part the songs that make it, and in particular, there's a genius reworking of Blur's “Boys & Girls” about Shakespearean gender-bending.

The socks have gone all out on this year's costumes, with doublets, ruffs, golden chains and pretty dresses, though no sign of any hose, which is probably for the best. In fact, so proud are they of the high production values for this show that, rather than changing between outfits and thus allowing us only fleeting glimpses of each, they instead opt to show off several all at once: so one of them manages to be simultaneously Roderigo, Othello and a pianist in a tux. Eat your heart out, Olivier.

There's a sort of meta moment when the socks go to see a play, recounting the almost certainly inaccurate story of how they were first brought together by Shakespeare and a discussion of those iconic characters Dick and Bottom. It's not the rudest part of the show: there's bawdy enough humour throughout that even filthy-minded Renaissance play-goers would probably have approved. Maybe not the best way to convince the folks at CBBC that you're an appropriate choice for a kids' show, which apparently may be on the cards (about time, too), but nevertheless it's pretty bloody funny.