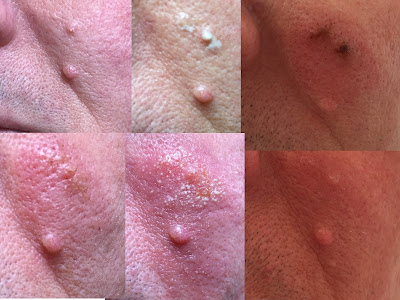 Urgh, look away. Not for the squeamish. I have undergone, not for the first time, The Dandelion Experiment, by which I endeavour to rid myself of a wart, by application of Dandelion juice.

You can see from the grisly photos above that it is, to a degree, worked. But what a gruesome degree. The blistered and pussy stage you see in figure 5 was how my face looked for two days in schools. In all the process took about 7 days to clear.

fig 1 is before and fig 2 shows the application of dandelion juice, on Monday April 16th. By Tuesday it had darkened for fig 3, then by Wednesday it was starting to swell and blister. Fig 4 shows it as its worst, as it was around Thursday and Friday, and fig 5 shows it the following Monday, all cleared up. There is still a small wart there, but not quite as visible as it was to begin with. And the second smaller wart that was threatening to form above it has, I think receded.

I could apply a second treatment but, I fear, I have too few days when I can hide away from the public. (I applied it on a Monday, knowing I didn't have a school till Thursday and thinking it would be gone by then.)

So ends this month's medical experiment. I hope it adds to the greater weight of knowledge.


And, knowing nobody will be reading this...

Lovely. Opportunities come my way frequently, but I don't always take them. Often I let them slip through my fingers. Knowing whether they're worth taking can be the problem. I, for example, have been invited to do Britain's Got Talent twice. Just imagine if I did it?

Ultimately I did one audition and failed it. Saying that, I then got asked about doing America's Got Talent. To be honest, it was only an exploratory phone call. Brutally honestly, they didn't want me. Retrospectively, I'm just guessing at that. Or, of course, they might have wanted me, but they needed me to prove that. Knowing that to be the case, I should have pressured them more. Except I didn't really want to do it. And it's not as if I'd have won.

Now another opportunity has come along, and I've said yes. Not that you'll know about it for months because it's top secret. Did you know that when you're involved with a project like this you have to sign something? A Non Disclosure Agreement. Forms sent by email that need printing and signing and scanning and resending. Right pains in the arse they are. Of course I signed them, and returned them, and then I learned what I was to be involved in. My oh my, this will be fun, I hope. The truth be told, though, you probably won't even see me on the screen. Highly likely all you'll see will be my hand and the back of my head, for a couple of seconds. Even then I most likely won't speak.

And, though I'll be using my comic drawing skills, you might not be impressed. Possibly you will be, I shall try to do my best. Pressure of time, though, will most likely work against that. Regretfully I'm not getting paid much.

Eventually I'll be able to talk about it, and it'll be a good anecdote to have. Not that that'll be happening till at least October, possibly November. Then the cat will be out of the bag, and you'll all go "was that it?" Is that your big secret, you'll say. Can no-one keep a secret these days? Evidently I can't.
Posted by Scottish Falsetto Sock Puppet Theatre (and Kev F the comic artist) at 21:15