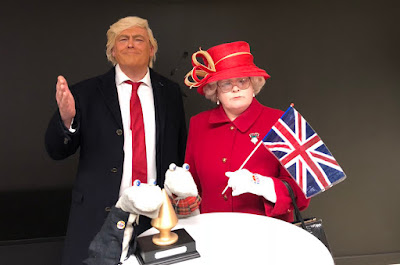 Wow! Well here's a pleasant surprise. The Scottish Falsetto Sock Puppet Thetre just won Bath Comedy Festival's inaugural Lovehoney Innuendo Best Joke Award. Here's us, with special guests Donald Trump and The Queen, and our award which is shaped like... well, it looks like the Christmas trees from The Louvre to us. (Thanks to Louisa Gummer for the photo)

Lovehoney have been the major sponsors of this year's Bath Comedy Festival, and the Socks' got some great laughs by managing to keep them going as a running gag during their Edinburgh Preview last week. Which is probably what impressed them enough to make our gag the winner. They wanted a gag with innuendo in and, let's be honest, it's not our greatest joke ever. But it gets a laugh and, much more importantly, it just won us a flipping prize! Shaped like a butt plug.

I say shaped like. I'm reliably informed that it is in fact an actual butt plug from Lovehoney's factory, painted gold. Blimey. All I can say is, if you've got the trots that bad, you're going to be better off with Immodium. (Which is just the sort of gag I wish I'd thought of on the podium when I picked up the trophy at the end of Saturday night's Gala show, rather than just delivering my winning gag very badly, as myself rather than as a Sock).

Donald Trump, in the photo above, is played by the brilliant Lewis Macleod, who I found myself working with for the first time since 1998 when he was part of the cast of my BBC Radio Theatre studio audience pilot Meanwhile, co-starring Ronnie Ancona and Geoff McGivern. There, names succesfully dropped. The Queen is played by one of the theatre company Rare Species, who seem to do sterling work all over the country.

So, what was this joke of ours? Brace yourselves...

"I love nursery rhymes"
"Cock Robin?"
"No, it's just the way I'm standing" 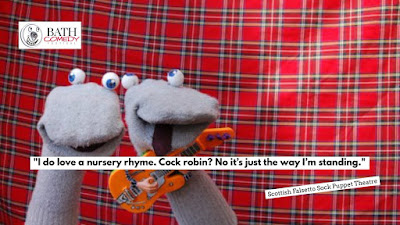 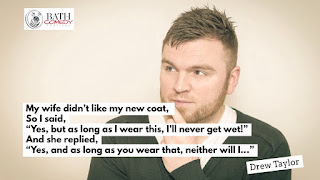 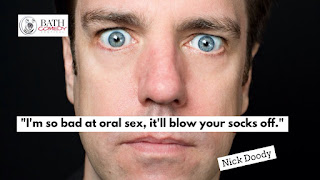 Thanks again Bath Comedy Festival and Lovehoney, the award takes pride of place in our trophy cabinet alongside... the sides of our trophy cabinet. Next stop the Edinburgh Fringe's Best Joke Award (unless, of course, that's already been decided).

The Scottish Falsetto Sock Puppet Theatre are Superheroes at The Gilded Balloon at the Edinburgh Fringe from August 1st to 26th - ON SALE NOW!
Previews:
April 27 - The Canvas, London E1
May 26 3.45pm & May 27 5pm Komedia Brighton

- with more preview dates to be announced