My Comic Strip Review Of The Year 2020 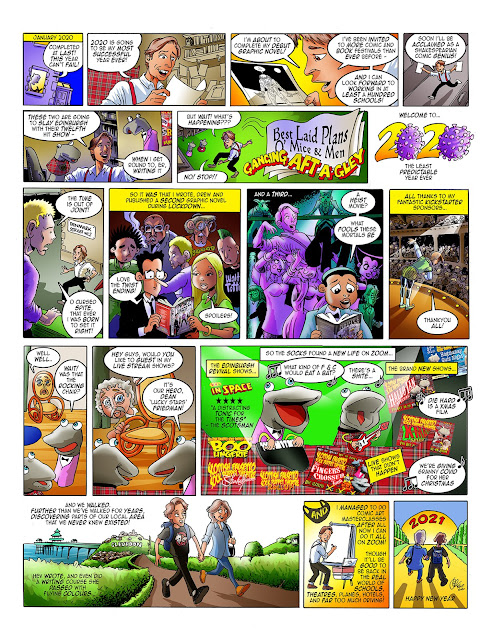 Looking back over 2020 I've managed to be much more positive than some recent years. (To be fair, Mum dying on the penultimate day of 2018, and us selling our childhood home in the closing days of 2019 cast a shadow over those years). And, while many have had a truly miserable time through the pandemic, and many more are full of woe as Brexit unfolds, for Hev and me it's been a lot more tolerable than it might have been. 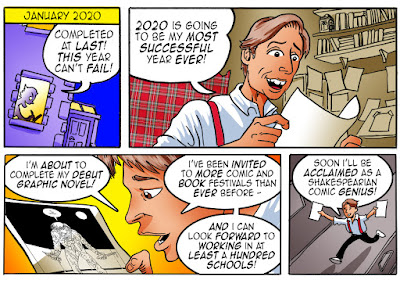 Creatively 2020 was a high watermark for me. Because I wasn't spending whole days travelling to and from schools and gigs, I had more time at my desk than ever before. And because I couldn't perform live shows only Zoom shows, to an audience comprising many of the same people every time, I was obliged to write more new show material than I would do in a normal year. 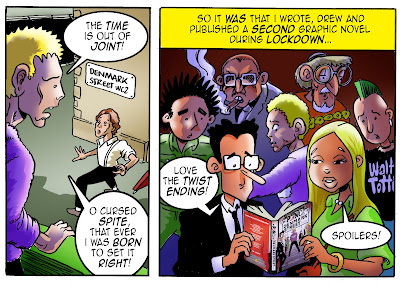 So, at the end of 2020, I've published three whole graphic novels. That's 365 pages of comic strip, which I think is pretty bloody amazing. The Kickstarter campaigns have enabled me to do it, and made sure that I haven't lost money on the process, but I've not made money either. If I manage to sell every copy of all three print runs it'd still not pay as much as drawing that many pages for Beano or Bible Society, but the books are out there, and I think they're good. 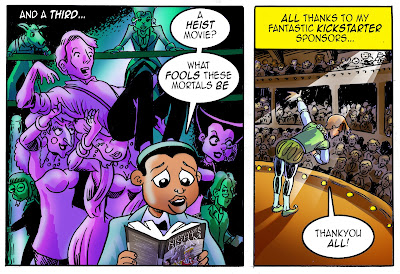 If they reach a public, as I think they deserve, then I could build to doing more books that reach more people. I am, in essence, doing nothing different from JK Rowling and David Walliams. All we need is for the rest of the world to cotton onto my genius, and said world is my oyster. 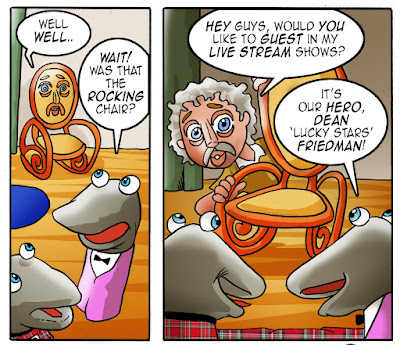 The Socks shows, encouraged by Dean Friedman inviting us to guest on his shows, have been quite the revelation. We've got audiences, again not as big as they could be, but bigger than many peoples, and they've made every show as profitable as a touring gig. In fact, once you take away the costs of putting on an Edinburgh show and staying there for a month, it's likely that I came away with more profit from my July & August Virtual Fringe gigs than I do from the real thing! 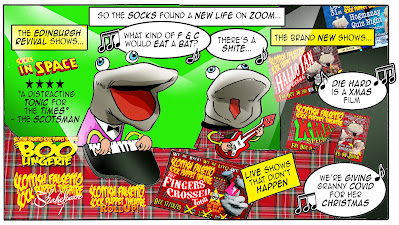 Getting the chance to dig out and re-perform four of our classic shows (Space, Boo and Shakespeare in August, then Roll Up in November) was great fun, a reminder that we actually have quite a repertoire we can tour, when touring resumes. And writing the new shows was the best thing. Hallo Ian had more new material than New Material Night, ironically, and the Xmas Special and Hogmanay Quiz Night had as much again, not to mention the stuff we wrote for Dean's shows, of which I think we did a dozen starting in April. 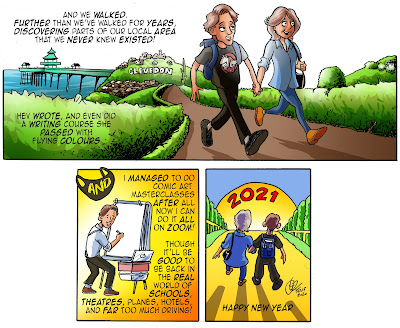 True, we've eaten into the money from Mum & Dad's house, but at least we had that. Without it we would have been suffering badly by now. The loss of earnings in 2020, if they continue at that level in 2021, will be an increasing concern, so I'll just have to redouble my efforts to get school work on Zoom, try flogging my books, and get bigger audiences for the Socks' Zoom shows. Anything's possible, so let's make it happen. Here's to 2021. Come on, what's the worst that could happen..?