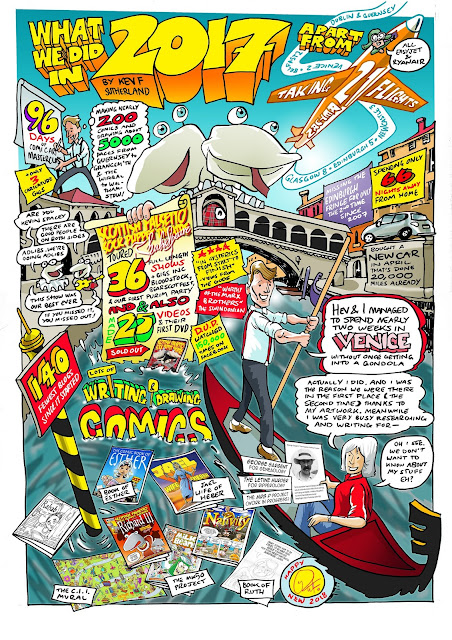 And here, as is becoming traditional, is my Comic Strip Review of 2017. I do hope you like it. Inevitably it has a Venetian theme, commemorating the fact that Hev and I spent the best part of a fortnight, over two visits, in Venice, thanks to her artwork.

I seem, as ever, to be obsessed by my statistics, which I think speak for themselves, and offer little in the way of comment or analysis. It might have been good to point out that it was the Socks' most successful tour in terms of audience numbers and profitability, but instead I've just captured the fact that, by dint of giving Edinburgh a miss this year, they did their fewest total number of gigs ever. Quality over quantity, that was 2017's byword.


The weight of comic strip work I've had this year is rightly prominent. From the Women Of The Bible strips, of which I am inordinately proud and really looking forward to seeing in print in 2018, to the CII mural, which I spent half my time in Venice colouring, and the Milton Keynes 50th anniversary project, which experiment is going to be repeated again in 2018.

Hev's work gets a mention, which is a rarity in these annual strips, with her having two published articles, for Geneaology and Ripperology, and her work as an artist taking us to Venice. Being paid to go to Venice, only four weeks after we've gone on a holiday there, was both a boon and a paradox. As for what went on there, and some of the people she found herself working with, I'll leave it to her to tell you all about.

UPDATE: Fact check. Before anyone else points it out, I've just noticed the number of flights I've written in the slipstream adds up to 22, not 21. And that, since one of the flights was to Guernsey, then I've obviously flown with Aurigny, and not just Easyjet and Ryanair. Pretty sure the rest's right.

Socks, schools, comic strips, and buying a new car? Is that all that happened in 2017? Surely not. And the rest of this blog covers it all, I'm sure (and the fact that I've written fewer blog posts than any previous year rather suggests that I've been keeping myself busy). Here are those stats, ranked against past years.