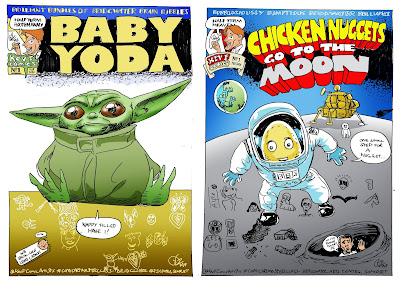 We've just had half term, so these comics come from classes at Bridgwater Arts Centre. A lovely little place with a sweet little pair of groups including parents and kids. And always nice to get a new cultural icon recorded in a front cover. Like I'll ever watch the show with Young Yoda in (which, at time of writing, hasn't even been on TV in the UK). 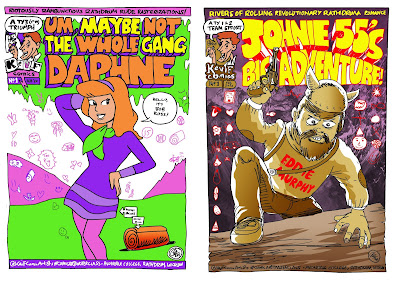 Two days at Avondale College in Rathdrum produced some top notch comic titles, these two the product of Transition Year. I've given up trying to understand what Transition Year is, but it's probably 4th Year, which is probably Year 10 in old money, but who can ever be sure? 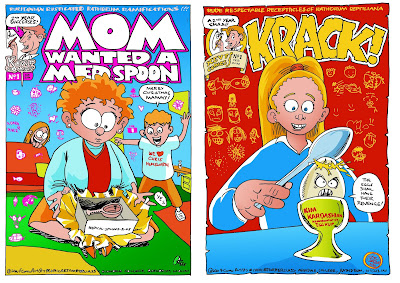 The second day in Rathdrum, with 2nd Years (yr8) gave us the best title of the week, and a totally unintentional mis-spelling of "craic". 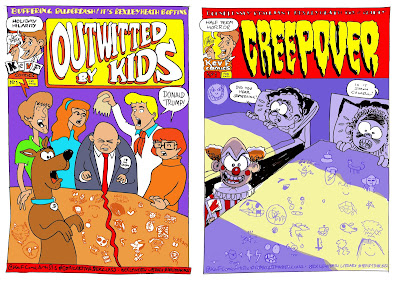 Back in half term week, these comics were produced by kids at Bexleyheath Library, and though the drawing of the covers is a bit rushed on my part, the end result is fun as always. 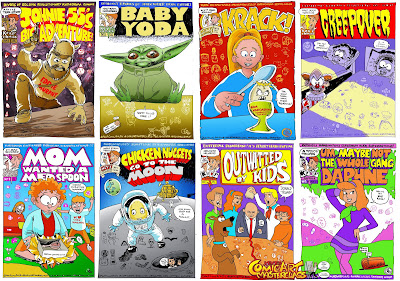 Posted by Scottish Falsetto Sock Puppet Theatre (and Kev F the comic artist) at 21:09 No comments: 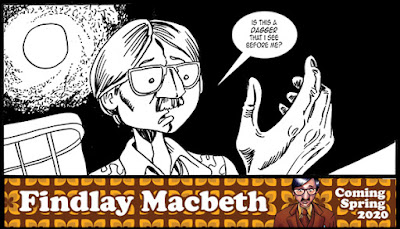 As I lose track of which screen grabs I have and haven't posted up here, the plugging of Findlay Macbeth continues. Though having got over the £500 mark in two days, another four days have only seen our total rise to £711, so more plugging is needed. 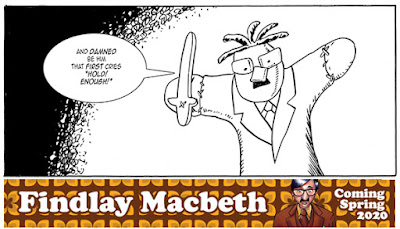 I've made the A5 pages, done some redrawing, and laid out the pages of the play itself. I've made the endpapers and the preface and frontispiece and whatever all those bits are called. Only the Thanks and acknowledgements are needed, which will have to wait till Kicky McKistarter has run its course, then into production we go. 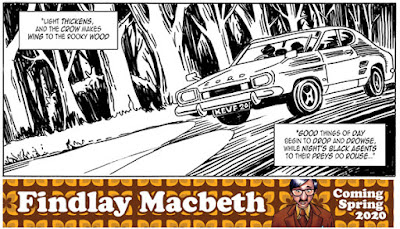 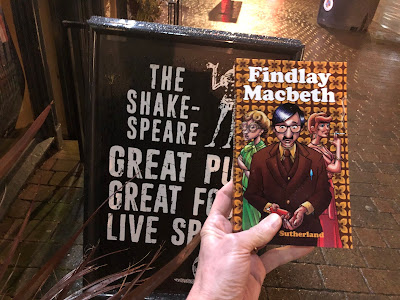 In Kendal for my classes, which other hotel could I possibly stay in?

A new ad to go on my Comic Art Masterclass emails, that'll do the trick...

Posted by Scottish Falsetto Sock Puppet Theatre (and Kev F the comic artist) at 16:27 No comments:

I Got Locked In My Nan's Closet - comics by kids 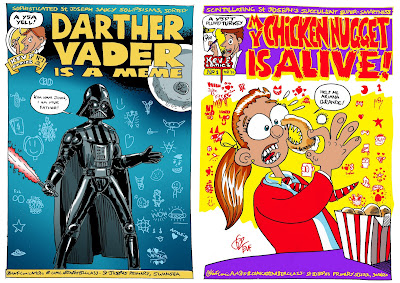 A busy week of Comic Art Masterclasses saw me travelling the width of the country. These two are from St Josephs Primary in Swansea, a school I think I've visited four times now. Amazingly it's the first, and so far only, return visit of the year so far, all my other classes being at schools who are having me in for the first time. 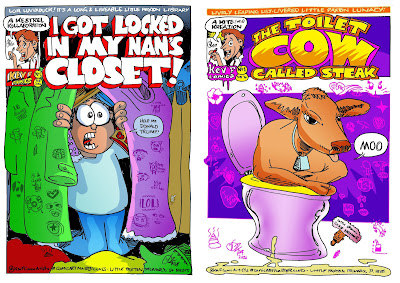 This school, enduring my presence for the first time, is Little Paxton in St Neots, Cambridgeshire. Yes, a bit of a drive, but well worth it. Lovely kids and smashing work. 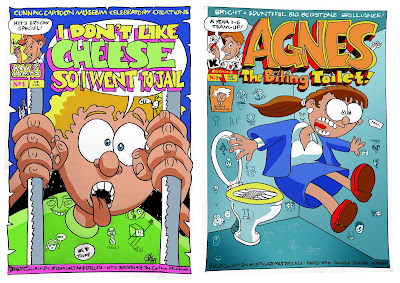 The first of these was produced at a lad called Kit's birthday party, held at the prestigious Cartoon Museum in London. Great fun, and (whisper it) I got into the museum for free to. It's brilliant. The second is from Bedstone School in Shropshire, who only had me for half a day, courtesy of Bible Society who's given me as a prize in a story writing competitione. Congratulations to Joe, the year 6 pupil who won me. 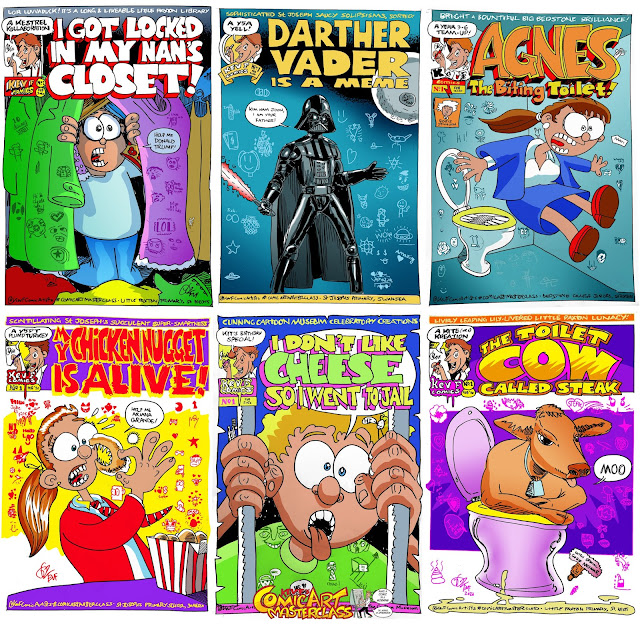 And while I'm on, can I remind you my debut graphic novel Findlay Macbeth is about to be published. If you'd like to bag an advance copy, or even get the chance to buy original art pages, go to my Kickstarter here. Thanks. 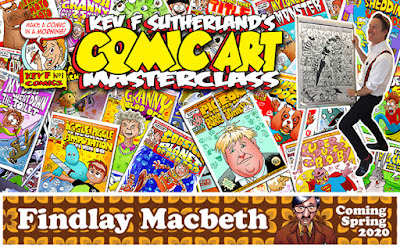 
Posted by Scottish Falsetto Sock Puppet Theatre (and Kev F the comic artist) at 15:56 No comments:


The Kickstarter campaign for my graphic novel Findlay Macbeth went live on Thursday afternoon, just before I set off for an overnight stay before my next school visit. By 9 o'clock Saturday it had reached its goal of £500! 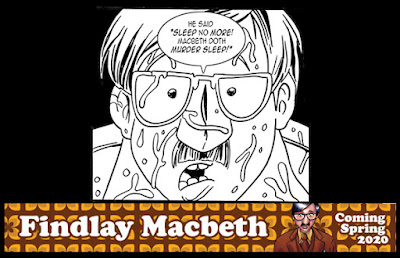 Now I have to dream up some Stretch Goals, which is what I believe the kids are calling them these days. I have still to contact all the schools I've visited and give them a chance to order copies, and plugging has really only started.

The Kickstarter campaign is here, closing on March 14th.

Bizarrely, my attempt to "boost" the campaign on Facebook has been held back because, they tell me, of bad language. This is what Facebook has to say... 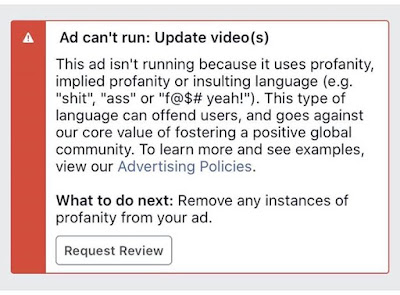 Meanwhile, here's the campaign itself: