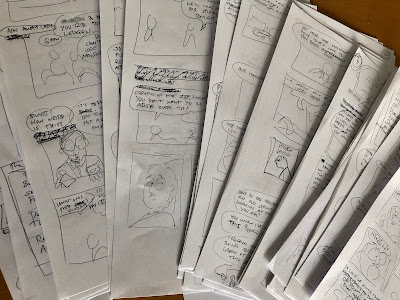 Comic creating pals, your help and advice please. I'm writing and drawing a graphic novel which I aim to self publish. So, your tips. (I've already sent off for one quote, but if anyone else would like to recommend printers, please fire away below).
Working title is Findlay, here's a photo of the work in progress (yes, that's how I write, in biro scribbled pictures). I'm working towards a 150 page (approx) black & white graphic novel, and thinking I'll do a Kickstarter to promote and advance sell it. So, please please please any tips.
- Conventions and festivals?
- Places and ways I can sell a graphic novel?
- Things not to do on a Kickstarter?
- And does anyone want to see it in its early stages and give me constructive advice? (I am so used to working in isolation, and am so out of touch with recent comics, I'm open to people telling me they've seen this idea done before and how old-fashioned my style is).
Findlay (working title, you'll learn the full title soon enough) is a comedy thriller based on a classic story, and I'm targeting a broad / younger audience (and gosh isn't it hard resisting putting sweary words in? I've already got a "rat bastard" that needs replacing).
So, your tips please, thankyou. From Kev F, hoping to return to the comics world properly with this one 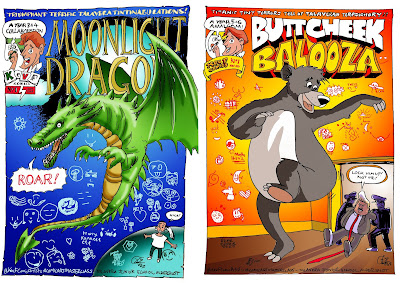 This pair of comics, produced by kids in my Comic Art Masterclasses, come from Talavera Juniors in Aldershot. A military-connected school where 75% of the pupils have parents posted at the nearby barracks. Apparently, at the drop of a hat, half the school can find its parents have been redeployed and they have to up sticks to another part of the country. That notwithstanding, they had fun and gave me the chance to colour up one of my favourite covers of the season. 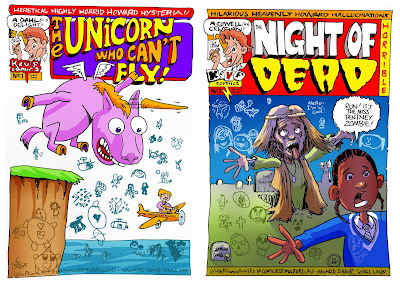 Howard Juniors is in Kings Lynn, which I can confirm is officially a long drive from home. On the plus side, they were so impressed they've already invited me back for a return visit in December. 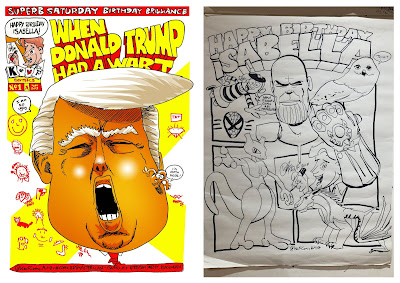 This comic was the product of the kids at Isabella's birthday party, an event I was invited to run in Blackheath. Sans photocopier we weren't able to print a comic for them, but the cover came out nicely. 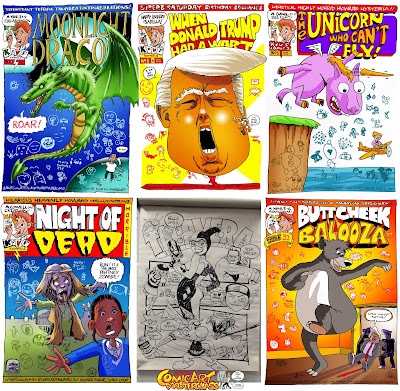 The celebrities these five groups chose to appear in my demonstration strip were Ariana grande, The Queen, Ed Sheeran, Simon Cowell, and Donald Trump. 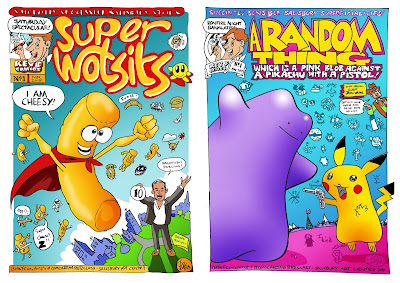 My travels in the last week have taken me from Cornwall to Northumberland via Wiltshire and the West Midlands. We began at Salisbury Arts Centre with the two groups that produced these delightful little creations. 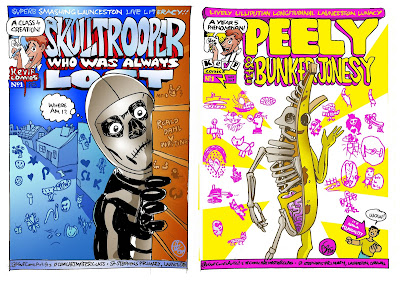 In Launceston in Cornwall, which isn't as far away as I thought it was going to be, the year 4 and 5s proved very games-oriented. I believe these titles both come from Fortnite, but really how am I ever supposed to know what the kids are talking about? 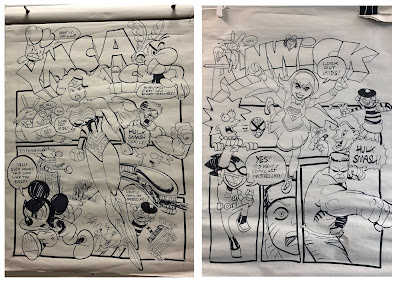 On Saturday I did an afternoon at the YMCA Comic Con in Birmingham, which was a small scale affair that saw me drawing caricatures and running through whatever bits of teaching I could manage, as they dropped in and dropped out. The time flew by and the kids had a fab time, though we didn;t manage to get a comic done. So here's the flipchart from there, and a from a few days later in Alnwick. 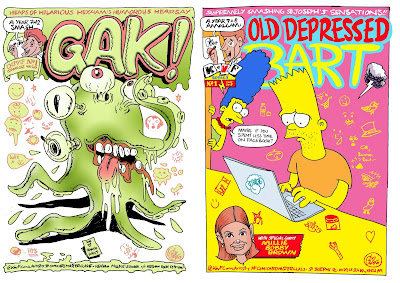 Two days in Northumberland courtesy Hexham Book Festival, my most regular bookers, began at two middle schools in Hexham, where the kids were quite challenging but ultimately triumphed with these two cracking creations. 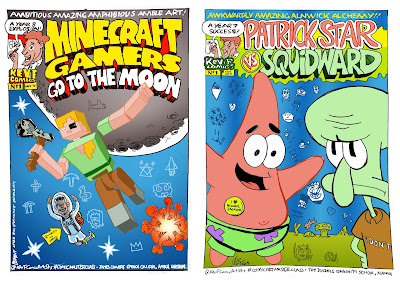 Then in Alnwick & Amble, the two groups at two different schools came up with these classics. It was a shame that the whistle-stop nature of my travels, and the fact that I was staying at a hotel on the outskirts, meant I didn't have time to take in the beauties of picturesque Alnwick, or indeed the fascinating old buildings I passed on the way to Amble. Stop and smell the flowers boy. Says he, spending four hours in the airport colouring comics waiting for his flight, which isn't till nine o clock at night. 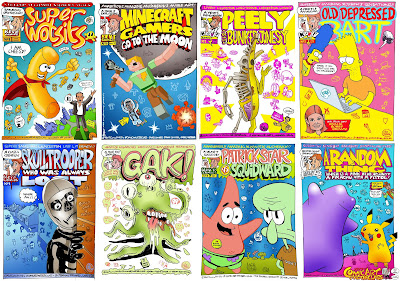 The celebrities these nine groups (including the YMCA group on Saturday, though they made no comic) chose to tread on a worm in my demonstration strip were Bruno Tonioli, Craig Revel-Horwood, Cristiano Ronaldo, Naga Munchetty, Millie Bobby Brown, Roald Dahl, Kanye West, Michael Jackson and John Wayne - quite the most diverse week of suggestions of the year, I'd say.

Destroy All Marshmallows - comics by kids 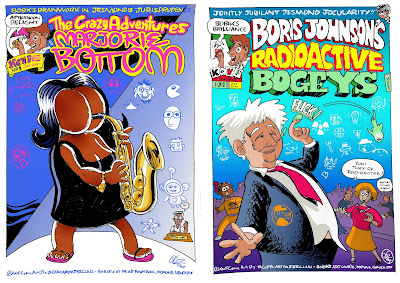 A busy half term week of Comic Art Masterclasses began with a trip to Newcastle where I did two sessions at Bobik's, an art centre above a pub in Jesmond. We didn't have a photocopier, sadly, so the kids didn't get a comic to take away, but we made all the components, including these two stonking covers (which I colour afterwards then email back to them, in case you were wondering). 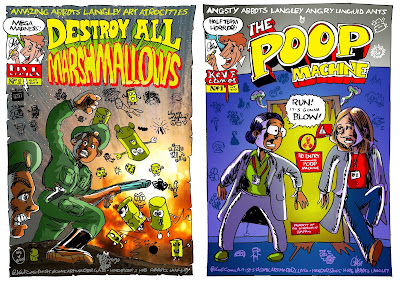 In the Hertfordshire village of Abbots Langley, two sellout classes produced these two fine comics. Again there was no photocopier to hand, but thanks to a couple of kind local estate agents, we managed to make the comics. And don't they look grand. 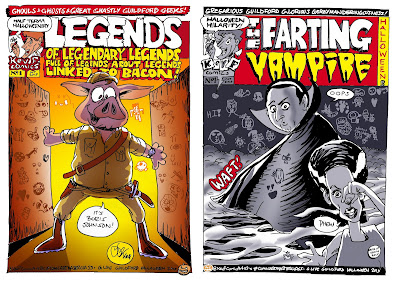 At Guildford's G Live, where I've done the class four or five times now, we had two more sellout groups, who came up with a couple of great comics, one with the best title of the week, and the other suitably Halloweeny, giving me an excuse to do an EC parody. I also did one for the flipchart, as you can see... 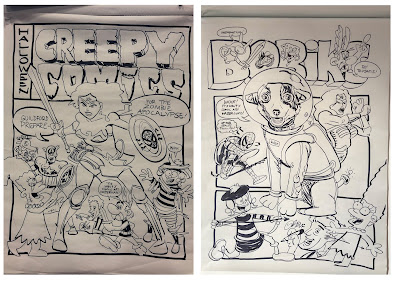 Here are the flipcharts I produced for Guildford G Live, which was on Halloween itself, and Bobiks. Bobiks is named after one of the Russian space dogs of the 1950s who ran away and didn't have to fly, hence the main image. 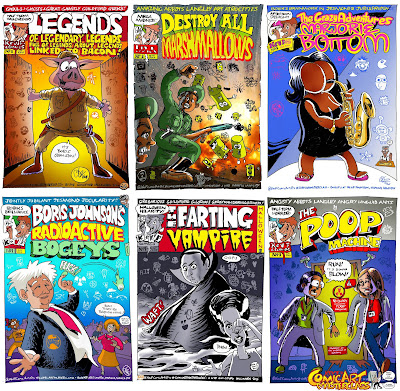 The celebrities these 6 groups chose to appear in my demonstration strip were Boris Johnson, Elvis Presley, Stan Lee, Lady Gaga, Usain Bolt, and The Emperor Of Japan.