My Comic Strip Review Of The Year (and the decade) 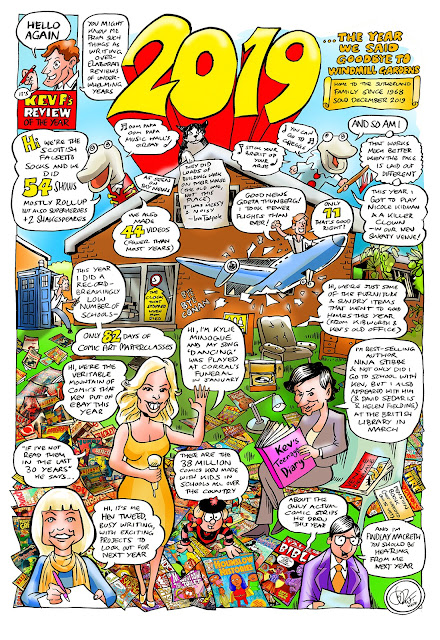 Once more I've put far too much effort into knocking up a comic strip Review of the Year and once more it's a bit of an ugly mess, but there you go. (Below you can see the previous nine years' efforts). I've set it in the back garden of 17 Windmill Gardens because the most significant events of the year were Mum's funeral in January, and our finally saying goodbye to the family home of fifty years when it was sold in December.

In the meantime we travelled up there innumerable times, hence my inability to tot up "night away from home" on my little graph, doing an incredible amount of what can only be described as clearance. There were comics which I'd left on a shelf when I went off to art college in 1979 and haven't touched since, and getting rid of those set me off on a trajectory that saw me parting with hefty chunks of my childhood, from my Busters and Cors to my Valiant and Lions, my Smashes, my Defenders, my Planet Of The Apes, my Mighty World Of Marvels, Mad magazines, Look-ins (largely eviscerated to decorate my diary at the time). Then I started digging into the Marvel comics, getting rid of all my Captain Britains, my Daredevils, my X-Men. Nobody, it turns out, wants old NMEs or Q Magazines, but it seems there are precious few magazines and comics I feel all that attached to and need to keep. Which doesn't explain why my 100 square foot storage unit is still packed solid, mostly with boxes of books and comics.

The furniture from Kibworth went to some good homes, and it was a shame to not be able to keep things like the cocktail cabinet, but mostly it's simply been cleared, its fate unknown. The thing I'm saddest to wave goodbye to is the Conan mural in my bedroom, painted in 1978, but some things you can't take with you.

The house moving activity, which included a fair bit of house-sitting, paperwork (handled brilliantly by Hev Tweed who did way more work on it than me) and solicitor liaison, took a good few weekends, also giving us an opportunity to get away from the building work being done on our own house, which lasted from July to December and was a dusty, noisy, occasionally annoying part of the year. Having a nice looking side to the house, and repaired stone work, was worth it.

High points of the year were appearing on stage at the British Library, alongside David Sedaris, Nina Stibbe and Helen Fielding (talking about diaries), and staging another excellent Socks show at the Gilded Balloon at the Edinburgh Fringe (in our new small and sweaty venue Patter Hoose, which was perfect for me and sold out a record number of times). Finding all my old diaries and my childhood comics in Kibworth was great, as was feeling inspired enough to write and lay out a new 120 page graphic novel, Findlay Macbeth.

Travels with my comic classes took me to Hannover, Ireland North & South, Newcastle and Halifax a few times, Norfolk, Cornwall, Manchester, London, and all points inbetween, though only for 82 days, which is fewer than recent years. I also drew fewer comic strips (only two pages for Bible Soc, after a bumper crop the previous year), but Findlay Macbeth might redress the average next year. I few less, I drank less, but otherwise I did about the same of the usual stuff. A fine year, when we went to Venice too.


Bringing me to my Review Of The Decade. And I have to say this may be the least anxious of decades for me, perhaps inevitably given that I entered my fifties during it. Hey, I even got my pension on track, like my Dad had been nagging me to do for the previous four decades. Dad sadly only saw one year of the 2010s, while Mum managed a good and healthy time right up to the end of 2018, well done both of them.

The Socks peaked, saleswise (as far as Edinburgh shows and maybe Youtube hits go) in 2010, and have maintained a comfortable level through the rest of the decade. What? You really want me to rank their shows in order of which I like best? Okay, here's the Socks Top 8 (Of The Decade) countdown

Comics returned to my life in the 2010s, with The Beano employing me again, The Dandy using me for the first time, and Bible Society appearing out of the blue to commission my best work ever. I also self-published for the first time, with Hot Rod Cow, Captain Clevedon, the Socks comics and the forthcoming Findlay Macbeth all being stuff to be proud of. My older works, like Nambygate, are out there on Kindle too and bring in a few pence every month. (This all said, I could describe most of my previous decades this way too: In the 2000s The Beano used me, then stopped; in the 1990s Marvel used me, then stopped, and I worked on humour comics, then they stopped; in the 1980s Oink used me, then went out of business, as did Sounds and Warrior. So, roll on the 2020s, I can almost guess what'll happen.)

The Sitcom Trials reared its head a few times, including Edinburgh in 2013 and 2016, and lost me money every time. Hev and I did a lot of travelling together, often with my work, including trips to Venice with her work, Adelaide with mine, and Paris just for the fun of it. The whole of the UK and Ireland got a fair scouring between us.

And I presented Comic Art Masterclasses in schools, an average of 100 days a year, for the whole decade. For the first time, I end the decade doing pretty much the same set of things as I started it with. Apart from now wearing glasses and having more grey hairs and wrinkles than before, I don't feel like I've changed much. It's been fun, I look forward to hopefully seeing the next one through, making a living from doing what I love, and leaving something entertaining behind in my wake. 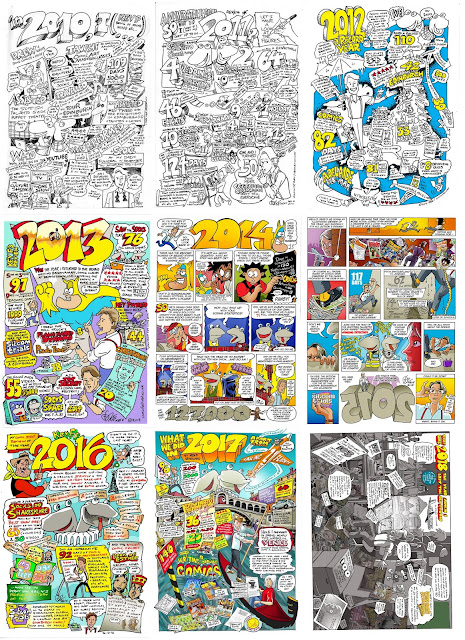 Here (above) are my comic strip summations of the last 9 years. Let's face it, you had to be there.