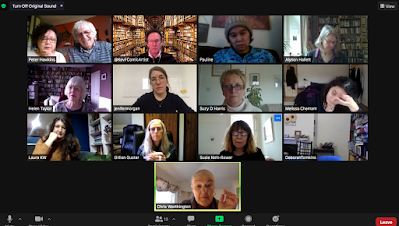 I've joined the Society of Authors. And to prove it, here's me at my first meeting. Just by way of trying to keep myself out there in the world, this is the first of a few meetings and events I've lined up for myself, anything to remind people I exist and hopefully start networking. And another way of getting out there is...

I've organised another Comic Art Masterclass. Although all the country's on lockdown this month, it's not a school holiday (as it was when I ran my classes in the summer and half term) so I can't expect kids to attend on a weekday. So here comes a Saturday morning class, with only a week's notice. Let's see who can make it.
It'll be the first event that I've plugged to the members of my Kev F Comic Artist Mailing List, which I assembled this week. At time of writing it has 94 members, all drawn from the Kickstarter supporters for my books last year. Let's see who leaves or joins when they start receiving news of events, shall we?
We'll also be able to track the membership of the Scottish Falsetto Socks Mailing List, which currently stands at 112 members, drawn from the ticket buyers for last year's shows. God, imagine if I'd started making a mailing list from the 1000 to 1500 people who come and see the Socks in Edinburgh every August? We could be looking at Zoom shows as a healthy new income. In the meantime, they don't do badly (and Jan 22nd's Burns Night has already sold 20, with two weeks to go).

This first working week of the year is always an odd one, and finds itself full of chores and admin. One part of which is assembling the Blurb book of photos of the year. I started doing this in 2011, when we came back with our first set of Venice photos, and now have a hardback 7" x 7" book of photos from every year since, plus bonus volumes dedicated to photos from Edinburghs, and our trips to Venice, Adelaide and Malta. Surprisingly we had as many photos from 2020 as in a 'normal' year, managing to fill 314 pages despite not being able to travel through the lockdown. (For the record our furthest trips were the one permitted journey to see Audrey & Dennis in Bodelwyddan between Welsh lockdowns, and one visit to London. A far cry for our usual gadding about.)
Not that I haven't been trying to put myself about. That is I have, as I often do at the start of the year, been emailing schools alerting themselves to the existence of my classes, and hoping they'll have me in on Zoom. This time last year I didn't have to bother as I had so many bookings coming in, for actual in-person visits, from schools I'd visited previously. That's showing no sign of returning in the foreseeable, no are most schools so settled they can entertain the luxury of my classes even by Zoom. But I've had a few small nibbles and we can only hope it will build from there.
I already have the pleasure of knowing my classes next Monday, which were to involve a drive all the way to Cambridgeshire, now only entail a walk to the back room. They're still having me, which is great. Everyone else, I look forward to hearing from.
It's at this stage of the process, of course, that I am reminded of gmail's limit on the number of emails you can send in a day. It is, if you'd forgotten (I had), 500. Which is why I got round to setting up the mailing lists, by the way. So when one door closes another door opens, or some similarly draughty metaphor. Anyway, at a steady trickle of 500 per day, I've emailed the schools of Essex and West Sussex for the first time, as well as getting the first messages since 2019 to schools as far afield as North Yorkshire, The Lake District, and the Midlands. I'm quite relishing the excuse of not driving the tens of thousands of miles that I habitually subject myself to in order to hack out a living as an itinerant artist. But I couldn't half use the money. So come on schools, distance really is no object as long as this lockdown lasts, and my classes are as brilliant as they ever were, even if looking into a video screen rather than bathing in the laughter of an entire class is a bit like calling things out through a chink in the wall with only half an idea if anyone can actually hear you.

The Scottish Falsetto Sock Puppet Theatre will be touring near you sometime. Catch up with them on Facebook for the latest. 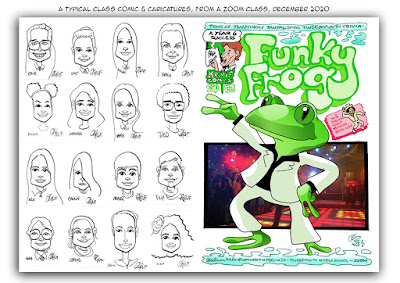