The Scottish Falsetto Socks' first gig of 2021 will be their Burns Night Spectacular on January 22nd - on sale now. And it was great to end the year with a successful final gig in the form of their Hogmanay Quiz Night (which you can see in its entirety, here on Youtube).

Quiz Night was joined in with by 36 ticket holders, and watched on Facebook by 400 more (since which, another 100 have watched it on Youtube and FB). The show ended up taking 1 hour 20 minutes to get through, it being that unpredictable how long each round would take, once the audience interaction happened. And the concensus seems to be that it was a success. There was certainly lots of laughter and involvement, and almost everybody stayed in the virtual bar afterwards, for a session which went on till 11, stopping only so I could go and see the New Year in with Heather.

For the record the question rounds, most of which had been trialled on Tuesday night at Hev and my mid-winter party (a low key Zoom event compared to my birthday party in October), were:

Rhyming Presents - 3 rounds, 5 questions each. Who is the celeb in the photo, and what is the present they've been given by the musical act? The song title rhymes with their name.

Play Your Movie Cards Right - 15 movie stills, what year is it set? And is it higher or lower than the previous movie?

What Kind Of F&C Song leading to Fart Gallery - 10 works of art with fart-related titles (eg When Did You Last See Your Farter, The Waft Of The Medusa, and Shitehawks)

Final Round - 10 points for a correct guess, minus 10 for incorrect, 5 multiple choices based on earlier rounds.

Amazingly that lot took 80 minutes to get through, with a couple of comedy routines and songs thrown in for good measure. I have to confess I spent a bit too much time devising these and making the Powerpoint rounds, given that I can only use them once, but they were fun to do. It would be great if it's reached a wider audience for future shows, let us see. 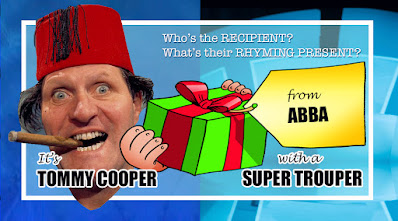 The Scottish Falsetto Sock Puppet Theatre will be touring near you sometime. Catch up with them on Facebook for the latest.