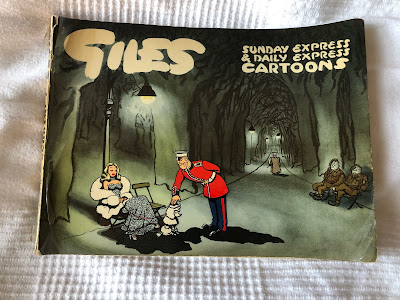 Happiness is reading a Giles Annual you've never read before!

My thanks to Annette for the Christmas money with which I bought this in an antiques shop yesterday. The 1952/53 Giles book (the Seventh, for collectors) full of dazzlingly drawn cartoons about the end of rationing, the Coronation, the election of Eisenhower and much much more.

A curio of this time is that Giles was sent as a sort of Artist In Residence, taking the family in a caravan and reporting back in cartoons. So we get a week of him living with a circus, taking part in the National Motor Rally, and spending a week at Silverstone race track. A brilliant book, such a joy. And such a shame that there are only, I think, five books left that I've never read.

I just added an extra prediction to my bound-to-be-wrong Predictions for 2021: New Doctor Who showrunners to be Jim Field Smith, Simon Pegg and Nick Frost.

Having just finished their series Truthseekers (which I'd been finding so disappointing it didn't even make my Top 40 for 2020), and finishing it the day after seeing Chris Chibnall's latest poorly written Doctor Who, I realise that this team could deliver a series 100 times better than the current one.

If Field Smith were to draw on writers he's worked with before, including Matthew Baynton and Tom Basden, this gives him a crossover with the creators of Ghosts and Plebs, and more. Meanwhile Pegg is the guy from Mission Impossible and Star Trek, as well as once being the guy from Spaced. And Nick Frost would also be there.

Imagine a Doctor Who series which might include an episode directed by Edgar Wright, and episodes by Basden, Tim Key, Mark Watson, all the writers of Ghosts, and the people who made Stag and The Wrong Mans. Frost overlaps with Stephen Merchant, into whose universe you might draw Ricky Gervais, Roisin Conaty et al. And the Pegg universe overlaps with Peter & Jim Serafinowicz who in turn overlap with Robert Popper, all of whom would be new to the Whoniverse.

It'll never happen. But wouldn't it be great?

My stab-in-the-dark guess for who'll be next Doctor Who? Guz Kahn.

While I was watching him in the Christmas Comic Relief Zoom Panto thing, where he was a total star, I was thinking "He'd make a really good Doctor". So, though my guesses are always wrong (and I have a very long track record here, dating back to predicting Stephanie Cole to take over from Tom Baker in 1980), this is the one I'd like to be true.

And already we have our first contender for TV Of The Year 2021.

No, not Doctor Who (don't get me started), I mean The Serpent. Excellent writing and splendidly directed. As for the casting, there were we thinking it was an international co-production, with all these Dutch actors we'd never seen before, and were had we seen that American girl before?

Turns out the lead "Dutch" bloke was in Dunkirk and a Star Wars movie, and comes from Stoke On Trent; his "Dutch" partner was Mandy Rice Davies in last year's Christine Keeler series; and the American girl? We knew we'd seen her, she has a very distinctive face, but we couldn't pin her down until we looked on imdb. Not only a lead in Ratched, but the daughter in Top Of The Lake. And she's not American, she's Australian.

At least I could be sure we'd definitely not seen the lead actor anywhere before. He was only a regular in the show at Number 20 in my TV of the Year 2020, The Eddy.

Let's just say I don't have the best memory for faces.

The thing that actually scares me is Covid deniers. Have you seen the things they say on Twitter? (Just type in "I guarantee none of us will die" and see what you get).

You can see how it starts, from fear, and ignorance, and to an extent empirical evidence. There are indeed many people who've not had a one-on-one encounter with Covid yet, that is lost, or seen suffer, an actual person they know first hand.

But the knowledge that people can hold such a contrary view of how the world actually is is slightly mind-boggling. And I can see how that spreads virally, how one doubts ones own sanity and ones own world view. And how it then gets easier to say "maybe it doesn't exist" than accept that all those Doctors on the telly might be telling the truth.

That's the trouble with empathy and reason, you end up having sympathy for the devil. Mind you, I still can't understand why anyone voted for Brexit.

Am I the only person who hadn't noticed any shortage of KLF on the radio in the last twenty years? Listening to Radios 6 and 2 you sometimes can't move for Tammy Wynette singing about an ice cream van, and the other three or four variations of the same basic KLF song.

Next you'll be telling us Wet Wet Wet have been embargoed since the 90s (and not that no-one plays them cos, be honest, they were okay but they were no Deacon Blue).

Here's a question I can't find the answer to: Where did the current wave of Covid patients catch it? Do we know?

There are currently more people in hospital with covid than at the peak of the first wave (20,400 yesterday, against a previous high of 18,900 in April, though I'm sure there's someone who'll pipe up in the comments that they've been hospitalised "with" covid not "of" covid). So where did they catch it? Is everyone asked their patterns of movement? Have we identified clusters? Do they all work in schools? Did they all eat out to help catch it? Did even one of them go on an anti-covid march? Does that NHS App tell you anything at all?

We're going around town in masks, our hands wrinkled from half a dozen hand-sanitizings, walking in the road to avoid people, not trying on clothes, not touching anything we don't intend to buy. Et cetera et cetera. So, if everyone is doing this, how the hell have twenty thousand people* managed to catch the damn thing?

My thanks to Dave Nattriss for the stats of the day, ie Where Are We All Catching Covid?

Turns out 32% of transmissions (in 2nd week of December) came through schools, colleges & education, 15% from Supermarket shopping*. Only 7% from hospitals and care homes, hardly any from pubs and bars.

*clarification: 15% is from both working at and shopping at supermarkets, not just shopping.

I look forward to some man-and-womansplaining about how I've interpreted these facts wrong**, or something. Happy New Year when it comes.

** As predicted I had misrepresented the single biggest figure on the table!

These Nature Photography winners are fabulous. I have only one problem with them...

Why oh why oh why does someone insist that all the photographers give their pictures cheesy titles. "Caught in a blizzard"? "Brambling togetherness"? "Mammals Splash!!!"? (The three exclamation marks are theirs, by the way).

That's how you guarantee these pictures are never taken seriously: caption them for showing at a village hall bring and buy sale.