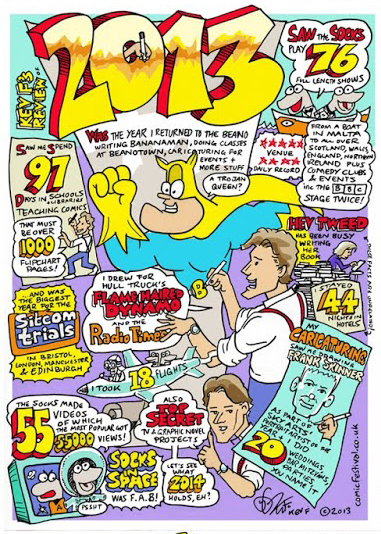 It has become an annual tradition for me to sum up the past year in a cartoon, and 2013 follows suit. I hope you like it. Here, below, are the stats contained therein...

The Scottish Falsetto Sock Puppet Theatre performed 76 full theatre shows (50 theatre, 26 Edinburgh) of which most of the theatres were 90 minute shows + 16 club spots & other events, including two appearances on the BBC stage in Edinburgh. (2012 = 110 shows cos of Adelaide & two a day in Edinburgh, a feat we don't miss repeating, 2011 = 64 with no Edinburgh).

I notched up an impressive 20 days of Caricaturing, which comprised 3 weddings (in South Wales, Edinburgh & Chippenham), 2 Bar Mitzvahs,  2 school fetes, 2 British Legion parties, 2 days doing the public in the streets of Waltham & Chingford, 2 Dr Martens boots stores in Glasgow & Edinburgh, 1 party for hotel staff, 2 kids football squads, 1 public school leavers ball, 1 Beano party, 1 Entertainer store and 1 day at the Sky Arts Portrait Artist Of The Year event in Cardiff where I ended up appearing on screen for 10 seconds, my interview with Frank Skinner never seeing the light of day.

School days 97 doing my Comic Art Masterclasses (2012 82 days, 2011 124, 2010 109, 2009 100, 2008 92, 2007 74, 2006 83) in schools, libraries and art centres from Inverness to the Isle Of Wight, Dublin to Belfast, Wales to Walsall, Lincolnshire to Leicestershire to the Lake District to London, Devon to Doncaster, Ripon to Ramsbury (it's in Wiltshire), Malvern to Manchester, Swindon to Swansea, Falkirk to Corfe Castle and most points inbetween. Not forgetting the South Bank Centre in London, and the legendary Scunthorpe Baths! 3 schools sponsored by Berol pens.

The Sitcom Trials held 6 heats, two semi finals and a final, at which I compered most and attended slightly more (I missed three heats) in Manchester, Bristol, London and Edinburgh.

1 strip for Radio Times (Barry Cryer's First Joke), a dozen or more Bananaman scripts (plus Beano classes and promotions), a couple of corporate Christmas cards, the illustrations for a second volume of Laurence Smith's books on management theory, and the illustrations for Hull Truck's Christmas production The Flame Haired Dynamo.

The Scottish Falsetto Socks only posted 55 videos this year, of which the most popular was Top 20 Horse Meat Gags (with 55,000+ viewings, followed by Peter Capaldi as Dr Who on 21,000+, with Song For Mrs Thatcher and The Pope Resigns doing well too), while The Sitcom Trials clocked up an impressive 9 videos in this its big tournament year, and I made a new promo for my Comic Art Masterclasses.