Bash St, Bananaman & Bonzos - me in the Beano annual 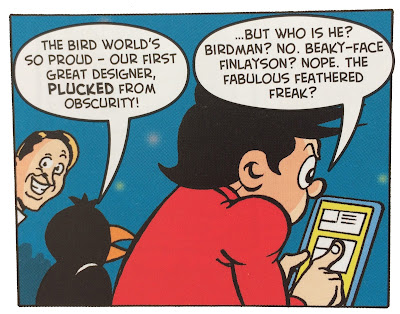 I'm in the 2017 Beano Annual, on sale now. And thanks to Wayne Thompson, drawing Bananaman (above) you can actually see me. Not a bad likeness wouldn't you say? I've written quite a few of the stories but, because I've not drawn them, you won't find my characteristic name-hiding all over the backgrounds (that happens in this year's Dandy annual, of which more later). 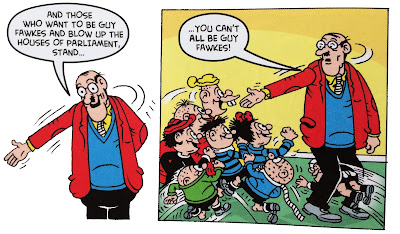 As well as writing the Bananaman strips, I've written the Gnasher strips and, for the very first time, I've been able to write for my legendary namesake David Sutherland (no relation) on the Bash Street Kids stories. He's been drawing the Bash Street Kids, and other stuff for DC Thomson, for literally longer than I've been alive. Yes, you do need to be over 80 years old for that to be possible. 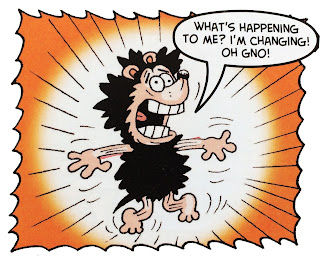 My Gnasher strips (drawn, I think, by Barry Glennard, someone correct me if I'm wrong) are a cough and a spit, being single pagers. Though I have managed to thread some continuity through them, having the Christmas Gnasher story cross over into the Christmas Bash Street story. 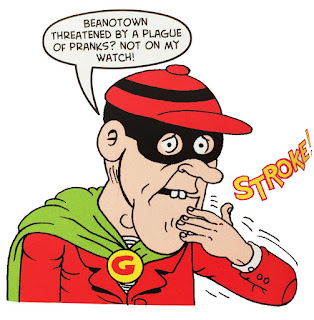 And I've managed to return to writing my favourite Bash Street character, Cuthbert Cringeworthy, who I made into a surprise hero back in the days of my Bash St Kids adventures. Some years ago he was the one who turned everyone into the Bash Street Zombies, and who rescued them from the Invasion Of The Beano Snatchers. In this year's annual he crops up, in his superhero disguise, in one of the Bananaman stories, then reappears in a Bash Street story, using the egg from the Easter Egg story as his hideout. And talking of secret superhero hideouts...

Kiwi Fruit girl's hideout, last featured in one of my three-part Bananaman stories a couple of years ago, returns. It's aged a bit since then. And when I'm not incorporating characters and artefacts that I'm over-fond of (it's amazing there's no Hot Rod Cow squeezed in anywhere), I manage to get in some arcane references that I don't expect anyone to get.

"Here comes the Equestrian Statue, marching up and down the square. Little old ladies stop and say 'Well, I declare'". Does anyone recognise the obscure pop song, from neither today nor yesterday, that I'm quoting here? Indeed it was the inspiration for the entire strip. (Answer below*) 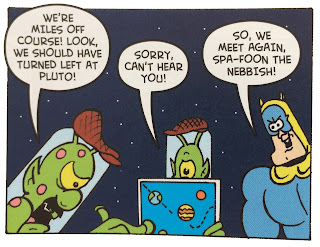 And where would Bananaman be without a confrontation between him and Spa Foon of the Squa-Trontians? Regulars in my Bananaman strips of a few years ago, their appearance has changed a bit over time. They've cropped up most recently in the recently self-published Hot Rod Cow No 2 comic - available now kids. Spa-Foon and the Squa-Trontians take their name, of course, from which line of classic comics? (Answer below**) 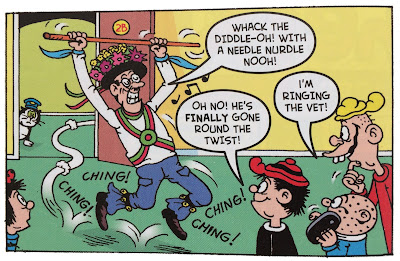 And to complete the obscure references abounding in this year's Beano strips, can anyone identify which newspaper strip "Whack The Diddle Oh" comes from? The same strip, of which I've had a paperback collection for many years, also gave us the phrases "It's Bonzer in Kangaroo Valley", "Yodel down the great white telephone", and "He wouldn't know you were up him with an armful of chairs". (Answer below***)

* Here Comes The Equestrian Statue is a 1967 song by the Bonzo Dog Doodah Band. Written and sung by Neil Innes, here's a TV performance of it from the German TV show Beat Club.

** Squa-Tront and Span-Fon (sic) were exclamations used in EC comics' science fiction titles Weird Science and Weird Fantasy. Fantagraphics books went on to publish a comic called Squa Tront in the 1990s, and in the 1960s Wally Wood contributed to a fanzine called Spa Fon. I learn, in researching this footnote, that Warren Ellis has also used the phrases as names for aliens, in his 2006 series The Captain. Great minds.)

** Whack the diddle oh, and other colourful Australianisms, come from the strip Barry McKenzie, written by Barry Humphries and drawn by Nicholas Garland, which ran in Private Eye in the 1960s. It went on to be made into two films, starring Barry Crocker (later to play the Dad in Strictly Ballroom) and directed by Bruce Beresford (who won slightly more acclaim for his later films Breaker Morant and Driving Miss Daisy).
Posted by Scottish Falsetto Sock Puppet Theatre (and Kev F the comic artist) at 11:50

Gnasher and Gnipper have been drawn by Barrie Appleby for years now - and he’s probably older than Barry Glennard!

As a young lad, I had a subscription to the Beano in the 1960s. (The Beano annuals for 1966-68 were absolute classics.) I also used to buy the Dandy, Beezer and Topper. I'm really glad to see the torch is still being carried forward! PS: I love Barry McKenzie and the Bonzo Dog Doo Dah Band, too..!