I started doing this last year, no reason why I shouldn't try maintaining the tradition. Here is my review, in cartoon form, of my 2011... 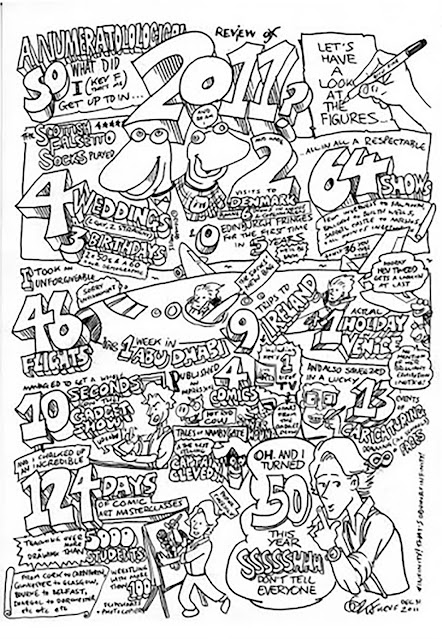 If you touch it it'll get bigger, fnaar fnaar. And if it's not all clear for any reason, those statistics look like this: In 2011 The Scottish Falsetto Sock Puppet Theatre played: - 4 Weddings (2 straight 2 gay) & 3 Birthdays (2 x 50th and a 60th). That's our demographic in a nutshell. - and made 2 visits to Denmark, playing 6 shows in Aarhus and Copenhagen - as part of the 64 shows they played in the year. This included.. - 0 appearances at the Edinburgh Fringe for the first time in 5 years (we return in 2012). Here's a nice review from Brighton. I took an unforgiveable 46 flights including 9 trips to Ireland, a week in Abu Dhabi and an actual holiday (a non-working holiday, a rare thing) in Venice. My only TV of the year was an appearance on BBC Northern Ireland online plus a 10 second appearance on The Gadget Show plugging the Nintendo Wii uDraw. (I forgot the Socks appeared on the ITV News during the Leicester Comedy Festival, and on Danish TV while we were in Aarhus.) I published 4 comics this year - Hot Rod Cow, Sinnerhound, Tales Of Nambygate and the best-selling (in Clevedon anyway) Captain Clevedon. And I forgot to mention appearing in Doctor Who Adventures & Match! I chalked up an incredible 124 days of Comic Art Masterclasses in schools, colleges, art centres and libraries, from Ireland to Abu Dhabi as well as Scotland, Wales and lots and lots of England plus I did 13 days (or nights) caricaturing at events including Mendhi parties, Batmitzvahs, street parties, weddings, workplaces and something in a castle on Guernsey, meaning that, including the drawings done as part of the classes, I drew well over 5000 faces in the year, possibly over 6000. When I meet any of you again, forgive me if I don't remember everyone's names. Oh, and I turned 50 this year. Don't tell everyone. Now, what surprises do we have in store for 2012. Any ideas? Happy New Year when it comes. Kev F Tweet