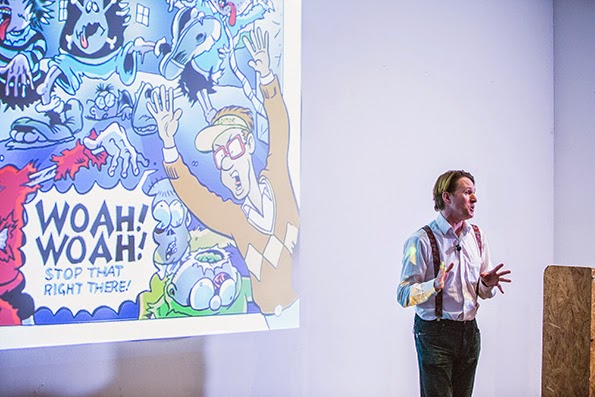 I was delighted to be asked this week to talk for ten minutes on the subject of comics, without hesitation, deviation or repetition starting now.... sorry, wrong show. It was for Nicer Tuesdays, an event hosted by It's Nice That magazine, who have interviewed before now. And a lovely time was had by all. The kids tweeted me...

"My favourite editors have been the ones that allow the creators to create" @KevFComicArtist pic.twitter.com/gGwjW9e30X
— It's Nice That (@itsnicethat) March 31, 2015


... and the review of the whole evening (which very kindly missed out any mention of my spare tyre and bad hair day, both of which need some urgent sorting) looked like this:

Here's what you missed at the Childhood-themed Nicer Tuesdays!

As host Liv Siddall helpfully reiterated last night “we’ve all been children at some point,” so the theme of Childhood is a surprisingly appropriate one for a night of talks from people doing brilliant work in the art and design world. Among the ones who spoke at Nicer Tuesdays last night we heard from Toby Parkin, who is lead curator of the hotly anticipated New Interactive Museum at London’s well-loved Science Museum, comics artist Kev F. Sutherland who has drawn characters for the likes of the Beano, Katie Johnston from Playology and Dean of London College of Communication, Lawrence Zeegen.

First up was Toby Parkin from London’s Science Museum to talk us through the history, educational nature and rigorous testing of exhibits at the museum, which has seen literally millions of kids’ faces light up with joy since it first opened in 1928. “This was the most popular exhibit that I think we ever had,” he revealed showing us a black and white photographs of an automatic door which was installed in the museum in the 60s, when they were still a rarity. “And it literally is just an automatic door.” Toby gave some invaluable insights into the challenges of creating an environment which balances education and play, which is no mean feat.
www.sciencemuseum.org.uk

I’m confident in proclaiming that there is likely not a comics fan in existence who hasn’t come into contact with the work of Kev F. Sutherland at some point or other. The prolific illustrator is responsible for The Bash Street Kids, Dennis the Menace, Roger the Dodger and Minnie the Minx to mention just a few, and his success is due without a doubt to the fact that he loves to draw.
In the course of his dynamic discussion about the nature of his work Kev revealed that he covertly inserts his name into every comic strip he draws, whether it be etched onto some hidden packaging or outlined in the shadows, fuelling us to gaze knowingly at his work forevermore.
www.kevfcomicart.blogspot.co.uk

Katie Johnston is one half of Playology, a studio run by her and her fellow interactive illustrator Charlene Man, which takes enormous complex subjects and breaks them down into comprehensive strategic games to help kids get their heads around them. She told us about the process of building a giant digestive system soft play area to help children understand the digestive process, complete with a mouth containing removable teeth, an elasticated rectum that could be climbed through, and a selection of cuddly poos which could be ejected whenever. She also had us mimicking the system with a balloon race, which caused no end of entertainment.
www.play-o-logy.com

Finishing up the evening was Lawrence Zeegen with a very nostalgic reflection on the life of Peter and Jane, the siblings who appeared throughout the series of Ladybird Books and basically taught everyone in the world to read. Having just finished curating an exhibition and writing a book about the timeless illustrations he was very well equipped to talk to about them, pointing out the limited world view of the family – white, Christian, wholesome and clean at all costs – and the excitement which ensued when they were modernised in the 70s.
www.ladybird.co.uk

Founded in 1991, Park Communications is considered by many to be London’s preeminent printer. With a roster of both corporate and cultural clients, Park is a one-stop-shop to translate, artwork, print and bind literature of many different kinds, from the finest coffee table books and catalogues, through FTSE annual reports, to niche market magazines and brochures. Working closely with clients to develop bespoke creative solutions, Park’s reputation is built on the highest quality, reliability and flexibility.
They have brought their professionalism to both our Printed Pages magazine and the It’s Nice That Annual 2013 and 2014, and we look forward to working with them in 2015 and beyond. To contact Park, email Alison at a.branch@parkcom.co.uk.
Posted by Scottish Falsetto Sock Puppet Theatre (and Kev F the comic artist) at 11:04