PHOP and props, a week in the studio 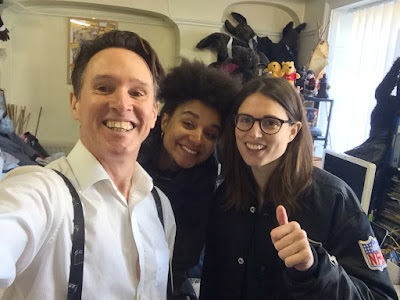 Here we see Emma the presenter and Zoe the producer from the BBC's Peoples History Of Pop, in my studio Monday morning, filming me talking about my teenage diaries for a TV series that'll be going out in the summer. The particular interest was in the Records For The Day I used to put in my diaries (which have their own blog, I do hope you've been reading it), and we talked for the best part of two hours. My office got increasingly cold because I was avoiding having the noise of the boiler in the  background. I hope I don't look too shivery by the end of the 10 seconds of me they'll probably end up using, and you don't see the drips on the end of my nose. 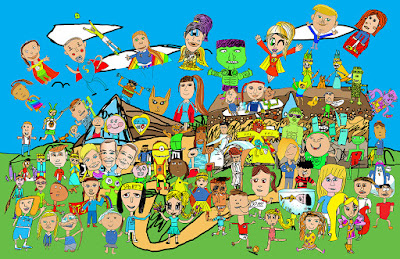 This week was the rarest of things, a whole week in the studio. I say the whole week, actually today (Friday) I'll be driving to Poole during the day to get to tonight's gig. But four consecutive days in my studio, my unusually clean and tidy studio as a result of having the BBC PHOP cameras in, is an opportunity to be creative and get some work done, and I believe I made good use of the time. One thing I finally got done was The Padiham Mural (above) which involved piecing together drawings that I got the kids to do a fortnight ago, colouring them and then waiting for my computer to slowly process them (I may have made the whole thing a bit big). 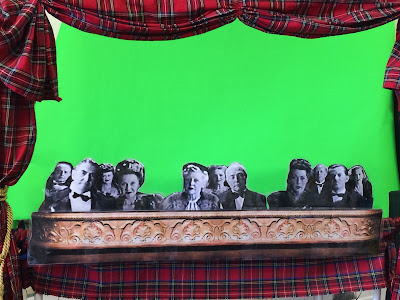 But the major focus of week was the Socks' new Shakespeare show. Following last Friday's Leicester preview, and in advance of this weekend's shows in Poole and Leicester again, I got busy writing, recording and prop making.

Above you can see the big but beautiful Theatre prop from the How We Met routine, which I hope is funny, we'll find out later. Along with this we have the newly written Iago Song, a version of which is already on Youtube, and Brush Up Your Shakespeare which I hope will be a strong number in the show (so strong it's not going on Youtube). I also rewrote Othello, following its rather flat outing on Friday, but am already thinking of dropping the whole bit in favour of Iago's Song (a 10 minute sketch or a 90 second song, which would you choose?). The development process continues.

The week also included me buying our advert in the Edinburgh Fringe programme, getting in there in time for the Early Bird deadline, thus saving myself 100 quid. Oh, and I made this ad plugging the Socks' graphic novel. Do please enjoy. 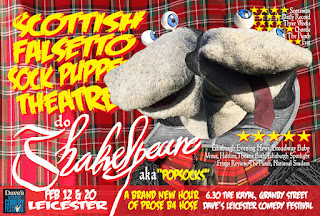 Did you know you can shorten your urls with BCVC and receive dollars from every visitor to your shortened urls.