★★★★ "The absolute essence of the Edinburgh Fringe" - Everything Theatre 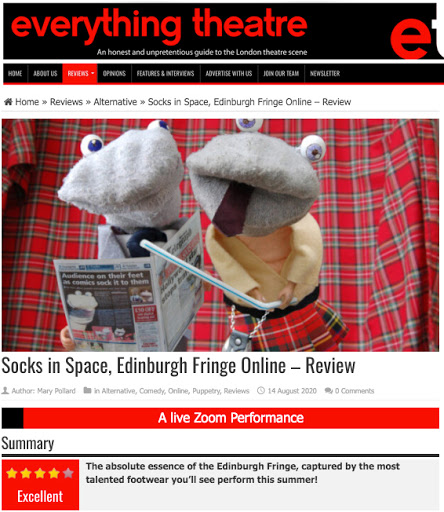 Would you believe it, our second 4 star review for last night's online Socks In Space show, this time from Everything Theatre - a reviewer who we didn't even know was there!

The absolute essence of the Edinburgh Fringe, captured by the most talented footwear you’ll see perform this summer!

The Edinburgh Fringe Festival: a time where you might take a risk seeing something out of the ordinary; when you would share a drink and a laugh in a sweaty space with strangers, and perhaps be a tad forgiving of a show that felt a little experimental or unpolished, or indeed has a largely tartan set. Socks in Space by the Scottish Falsetto Sock Puppet Theatre really captures this essence of the Fringe in a compact yet magnificently ridiculous Zoom show.

The socks come with their own enthusiastic fan base and we’re all in the same Zoom room together as the show begins, just like being at a dodgy virtual Edinburgh venue. As the 21st Century Socks logo rolls in, the fun begins!

A revival of a 2013 show, the performance is totally unapologetic in its re-hashing of old material, but this works well alongside the retro space theme. Two simple, grubby looking socks, goggly eyes sewn on top and a bit of felt in their ‘mouths’ are a veritable Eric and Ernie in hose form. They provide everything you might ask for in a fun night out. There’s music, corny improv, audience participation, bad jokes, bad taste and an abundance of laughs, all in a scots falsetto, with hilarious spontaneity and weirdly eclectic depth. Yes, many of the jokes are poo jokes, but this show also includes rapidly executed Gilbert & Sullivan rewrites (which can’t be easy to do with a felt tongue), an encyclopaedic knowledge of comic books, retro film and tv, and words like ‘recherché’. It’s bold and adventurous, just like a voyage into space! I particularly loved the excess tartan, the vernacular language and references to Corstorphine, which anchor the humour within a rich scots heritage and give the Sassenachs something challenging to translate. We are entertained with all the sci-fi classics; Star Wars, Star Trek, Fireball XL 5, Aliens, and a peculiar appearance from 2013 David Bowie in pensioner form, which is totally off the wall!

Sometimes the shots of the attendant audience become a bit distracting when you’re wanting to see more of a sock dressed up as an Irn Bru can (and the costume changes are both rapid and impressive!), so it’s almost like being on Gogglebox, but this is all part of the fun and helps create an authentic Edinburgh feel.

As a little bonus, puppeteer Kev Sutherland popped up at the end of the show for ‘a drink in the bar’, just to make the Edinburgh experience complete, which was a lovely opportunity to bond with the audience. Turns out he’s also a comic book illustrator who has worked on everything from The Beano to Marvel comics!

The socks offer no clever illusion: from the start they declare their performance really needs a green screen and some foam, which they cannot supply. But this means that the audience must surrender itself unquestioningly to the material they do have to offer, which is inventive, hilarious and totally bonkers. This is an incredibly satisfying production that really feels like a Fringe night out. Grab yourself a pint and prepare for an hour packed with laughs.