Edfringe Virtual Fringe - a look back on the month 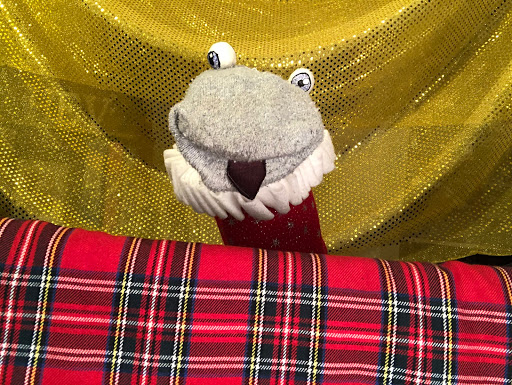 It wasn't quite Edinburgh, but parts of it came very close. I wasn't putting on a show every night for three and a half weeks, but I did manage to put on four shows, and they were "Edinburgh sellouts" - that is, had I been in last year's Gilded Balloon venue, I'd have been turning punters away, and emerging to the words "Sell Out" on the chalkboard.

The four shows we staged, on Zoom, were the initial All Request Show on July 31st; Socks In Space on August 13th; Boo Lingerie on August 21st; and Socks Do Shakespeare on August 29th.  I've uploaded various video clips from the shows, listed below, so you can get a taste. I tried, as much as possible, to keep a degree of interactivity and spontaneity, to make people aware the were watching a live show. That said, the only way to do the musical numbers, was to prerecord them and play them in as video clips. I'd like to master doing them live, but for this season that was the way they had to be done.

Sales were good and, had I been doing a show every night, would have been more profitable than a usual Edinburgh month, because of course I didn't have to give any of it to the venue, our listing in the virtual Edinburgh Fringe programme was free, and I'd had to spend nothing on posters and flyers. Oh yes, and we weren't staying in Edinburgh, which saved a couple of thousand pounds (memo to self: don't forget the letting agent still have our 2020 flat deposit for use in August 2021!). 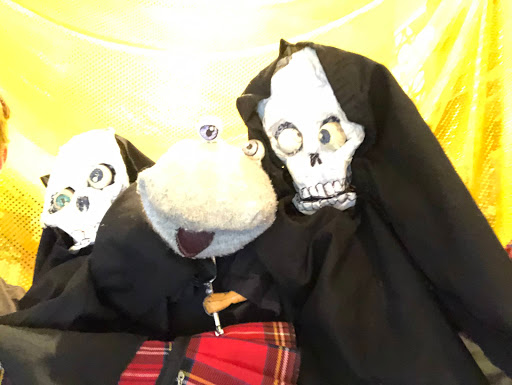 All Request sold 62, Space sold 37, Boo sold 54, and Shakespeare sold 56. Space suffered from something I only discovered on the night, which was that WeGot Tickets (an excellent ticketing service that I shall continue using) has a standard setting which makes tickets go off sale at 6pm. This is very unhelpful for a show like ours, which gets last-minute 'walk up' sales in the virtual world the same as the real world. The following week's Boo show sold 10 tickets in the gap between 6pm and 8pm, as I know Space would have. Space was also on a Thursday, which may be less of a "night out" date, whereas All Request and Boo were on Fridays, and Shakespeare was on Saturday. Again, it doesn't equate to something like last year, where we appeared on the Sold Out board 16 times out of 26 shows, but it may be as close as can be done with online gigs.

The definite highlight of the month was getting our 4 star review in The Scotsman, for Socks In Space. Which, coupled with a 4 star review from Everything Theatre, a glowing mention in a Kate Copstick Scotsman article, and the briefest of brief appearances on The One Show, ticked the top boxes for emulating the Edinburgh Experience. 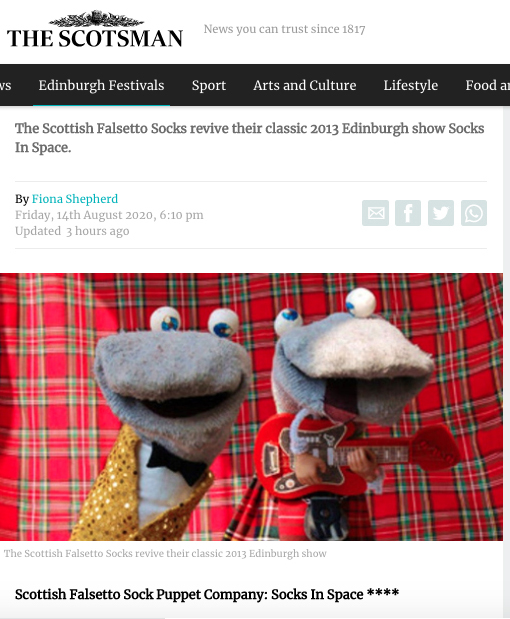 The biggest thanks for inspiring me, and showing me this was possible, has to go to Dean Friedman. If he hadn't contacted me back in April to ask the Socks to make a guest appearance on his Deanzine Live Stream Sunday show, they might not have emerged from their bag. Dean had started the shows when, like every performer, he had his live work stopped by the pandemic, and invited singer-songwriting guests onto his shows every week for a very entertaining live show that attracted a good audience. The Socks came back, first for fortnightly guest appearances, and later every week, doing a song every time. This was how we worked out we had to prerecord and mime our clips, which worked fine. Then, when Dean did his monthly All Request Zoom gigs, I realised the technology at my disposal, ie Zoom, would enable me to do this with the Socks. That led to a 15 minute test gig in mid July, then to the July 31st first experimental show, and on to the 3 Edfringe revival hours. The Socks rounded off the month by co-hosting and doing a half hour slot in Dean's Song Fest, which ran from 4pm to 10pm on Sunday 30th. The Socks will be returning on September 25th with their New Material Night. 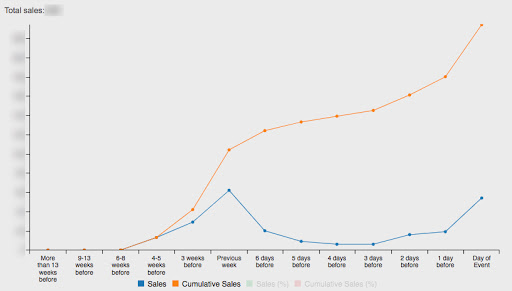 And, by the way, it's great to have graphs to look at again. It doesn't say as much as my Edinburgh graphs of old, but it's interesting to see how half the tickets are sold a week in advance, then there's a slow period leading up to the show, then another big clump of sales happens on the day of the show. Just like in real life.
In contrast to the success of the Socks shows, I also tried to line up days of Comic Art Masterclasses through August which were nowhere near so successful. I'd done a day of classes on July 23rd, which attracted a highly satisfactory 38 ticket buying punters. However that may have been all the punters I was able to reach in the world. Because, apart from classes organised for private parties and by art centres which were well attended, the ones organised and promoted by me were virtual washouts. (Aug 5 attracted 17 punters, but Aug 20 and 28 only managed to find 4 punters apiece). 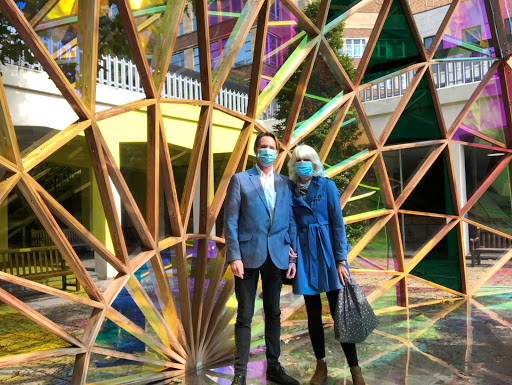 The rest of the true Edinburgh Experience has been missed, so no art and no socialising (Socks shows post-drinks chat notwithstanding, those have been quite good fun, but still not quite the real thing). Since lockdown had eased by the start of August, Hev and I have been able to go out and about on away days, but museums and galleries aren't open as normal yet. The above picture shows the closest we've come, when Hev led us to the Luke Jerram installation in the grounds of Bristol Uni's Chemistry Department. A tiny slice of both the Edinburgh and the Venice feeling, we can't wait till the real thing returns.
Video clips from the Socks Edinburgh shows:
All Request Show:
Period Drama
Macaque & The UKIP Song
An Actor Prepares & Walk On The Wild Side
Casablanca and Word Association
Dead Ringer For Superman
Always A...
Star Wars 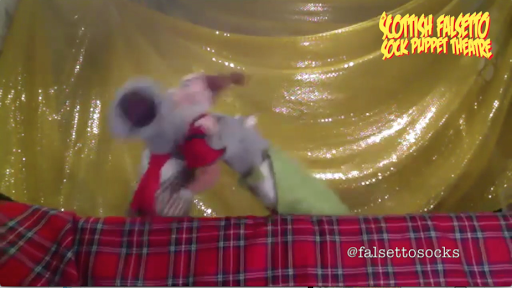 The Scottish Falsetto Socks return to Zoom for a New Material Night on September 25th. Suggest topics they should tackle, on Facebook or Twitter, and get your tickets for the resulting show here.