Edinburgh audit 2019 - The importance of lowering your expectations 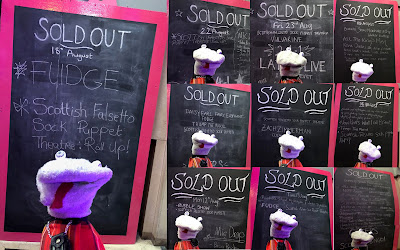 Edinburgh audit 2019 - The importance of lowering your expectations

This has been the most enjoyable Edinburgh Fringe for years. Not that there haven’t been downsides. There’s been a thing with the house, back home, which blighted the final week and which is too boring for anyone not involved to even think about.

The most enjoyable thing for me has been the sellouts. A record number of sellouts, 16 in all. And all as a result of my lowering my expectations.

That is to say, I lowered the target number for bums on seats - moving from last year’s 90-seater Sportsmans room at Teviot to this year’s 60-seater Dram at Patter Hoose. Meaning that I could sell out two thirds of the time, meaning that I had to spend less time flyering (I have a box and a half of unused flyers to recycle), and meaning I could spend more time concentrating on doing a good show, and enjoying myself.

The only problem with my venue, a room called Dram, was the heat. Gilded Balloon had built two great looking black box theatres, side by side, with lots of storage area behind, and good light and sound, both fitted onto the first floor of Adam House. What no-one had noticed was that there was no way for air to get in or out. Meaning that, as soon as the shows got going, with their hot lights and hot punters, the room would become unbearable. Zach Zimmerman, who has to get in after me, started bringing in a thermometer and was regularly recording temperatures of over 30 degrees at the end of my show. The hottest room I've been in since 2007's Balcony. I soaked the front row in sweat when I took my bows.

Fans and air conditioning units were brought in, which helped, but gave us the fresh problem of noise, meaning the back rows could hear more fan than show, especially for acts that didn't use microphones. I found that, as long as I got Florence The Technician to bump my mike up as far as it would go, I could still get the funny across. But Flo had the problem that, thanks to the fan, she couldn't hear my sound balance properly. Whatever, these were teething problems, and we got over them. Though right up until the final sellout Saturday night, which was a hot as the start of the run, the problems kept recurring. I will remember this as a very hot year. 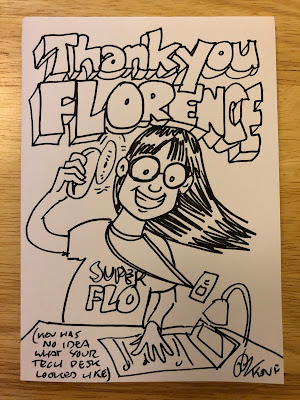 I bought Florence a wee hand fan, a gesture of kindness more than a real help. This is my Thankyou card to her.

Unlike last year, which I didn’t enjoy that much, I didn’t catch the Edinburgh cold, didn’t have to take any nights off, and most importantly my sales didn’t tank in week three. Last year I was full of theories about how flyering didn’t work any more, how punters weren’t here to come and see shows, and how everybody’s sales had fallen off a cliff. That may well have been a bad case of Confirmation Bias. Cos this year my sales have been great, meeting or exceeding my expectations, and I have no such cock-eyed theories to expound.

If you look at my sales graph, you might not think it such a cause for celebration, when you see my previous years including days that peak at 90 sales, whereas the best I could any day this year was 60. But a whole string of sellouts looks and feels great, and I’d rather sell out my 60 seater every night than struggle to get those last few people into my 90 seater.

Year on year I feel there is a decline in audiences for Mid-Range shows like mine, as an inevitable result of saturation. There are more shows, there are not necessarily more punters, and there’s an ever larger number of acts who you’ll have seen on the telly or who have big audiences online, who are filling out 750 seat venues like Pleasance Grand or the McEwan Hall.

Mitch Benn posted this Edinblog detailing his fight back against a similar decline in recent years, so we’re not alone. Richard Fry (@ExChildGenius) wrote a Twitter thread to the effect: “ OK #EdFringe I'm calling it. The audience isn't here this year. Fringe & Venue bosses are gaslighting us but I am on the street flyering for hours every day, the numbers simply aren't here.” And there was a lot of chat online along these lines. Could it be we’re all inclined to share more when we’re struggling, for company and consolation as much as anything else? 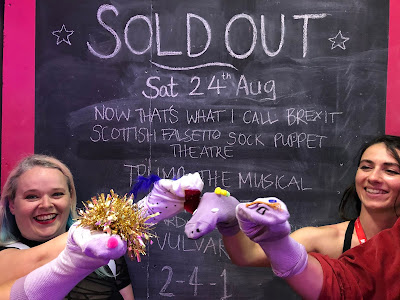 The Wolanskis circus skills team who came to Saturday night's show and brought their own socks!

This year felt, in many ways, like our first couple of years (07 and 08) when I would do guest slots for the fun of it, and end up networking by default. 2 gigs at the airport, 3 Not So Secret Cabarets, 3 Chortle Fast Fringes, 1 midnight variety, 1 musical comedy, 1 chat show where the Socks got to talk to Eddie Izzard, a Sky News slot, and a stint playing a bodyguard at the Malcolm Hardee Awards. I’ve not done that many extra gigs for years.

I even made more videos in Edinburgh than I have for years. Oor Wullie and the remake of I Can’t Stand The Rain are my favourites, the Sky News clip is the most watched, and the two instalments of History Of The Fringe are ones I’ll be able to revisit and add to. The live clips from the show have only started to trickle out, but now it’s over I’ll put more of them up. If I could find a way to monetise it, I could put the whole hour up for you to enjoy, cos I’m not sure I’ll be touring it.

I did no comic art classes, and I saw more shows than last year (though, since that only amounted to four plus the ones I was in, maybe no cause to gloat). I got three reviews, which is one more than last year. Oh and I did the Worst Soundcheck Ever, which seems like years ago now.

We saw all the art that there was to see (though the Fruitmarket’s closed, the Museums on the Mound are being rebuilt, and Jupiter Artland had a festival on the weekend we were free, so there was a little less to be seen. Shows at the Art College, the Modern Art, Summerhall, and Collective on Calton Hill were most memorable, nothing too disappointing by and large.

The weather was better than last year, with rain showers being scattered and blighting few whole days, and my complaints about roads being blocked off, and The Comedy Awards nominations mostly going to Pleasance acts again, were among my few gripes.

Oh yes, and we scattered Mum's ashes up the Glen, which feels like so long ago now. 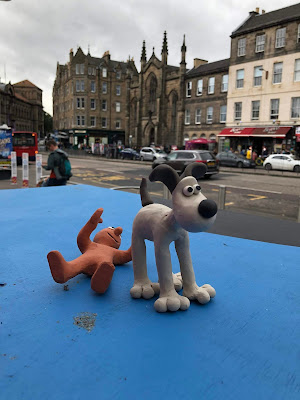 Spotted on the street near Pleasance Dome. No, me neither. 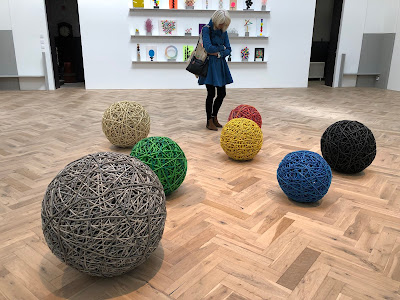 Just like last year, I’ve already thought about what next year’s show should be, and I’ve opted for the title Pop! That way we can start working on pop music and pop art material, and whatever comes out funniest will stay in the show.

The show itself has ended up being great. I wasn’t sure about its variability in the first week or so, with levels of laughter dropping off about halfway through because of the complicated story structure. But after I’d shuffled bits around, and as I relaxed into it, I really enjoyed it. And, throughout its final week, it’s been the funniest show and, as often happens by this stage, I love it as much as any other.

If I can think of any other salient observations, I’ll make them. Meanwhile below are observations and articles by others from this year’s Edinburgh. All going well, we’ll see you again at Edinburgh 2020, for the Socks going Pop!

Others on Edinburgh Fringe 2019:

Bonnie Prince Bob - There's No Edinburgh In The Festival

Should Edinburgh Take A Glastonbury-style Break? - The Scotsman

Imagine my shock when it turned out it was you, last seen at your dear mother's funeral down at the Golf Club. I had the opportunity to see you at a small show in MH, and didn't make the connection (after all, you were dressed as 2 socks), so booked to see one of the first shows in Edinburgh this year. Your analysis is spot on - we saw the unpolished version, which had 40 minutes of good material. More strength to you and many more successful seasons.