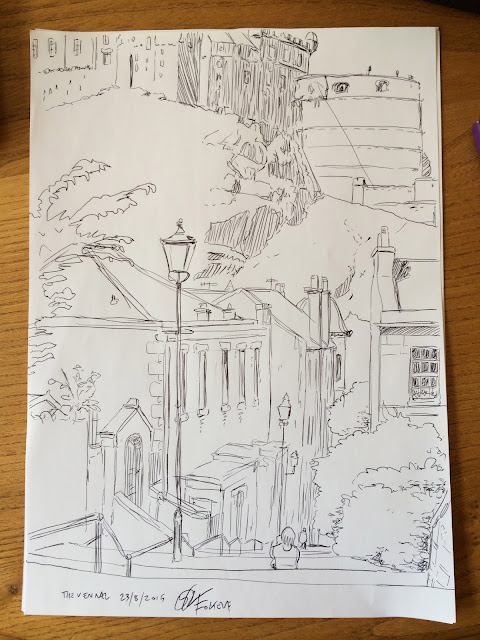 The Vennel, off which we stayed, drawn by me and left as a gift for the flat owner. I hope they appreciate it. It joins a number of other depictions of the same view that she has collected.

This was the year that we met Richard Demarco, sketched with Phill Jupitus, got a great haircut, and appeared on BBC America. (When I say year, I mean the Edinburgh. And when I say "the Edinburgh" I mean August.)

Saw a record low of only 2 shows on stage, but managed to see every art gallery. High points were Phyllida Barlow at the Fruitmarket, various artists at Collective and the old Royal High School on Calton Hill, also at Stills and Summerhall (and of course we met Richard Demarco), Roy Lichtenstein at the Modern, John Chamberlain at Inverleith, sculpture show at National Portrait Gallery, Victorian Photography at the Museum, and Kwang Young Chun at Dovecot Studios. There was also Charles Avery at Ingleby, who has can now be seen as lying somewhere between Banksy, Frank Quitely and Jack Vettriano, his novelty having worn off. Art College show very poor.

It was also the year that I spent maxing credit cards, waiting for a record number of clients to send me their money. A 4 figure sum for which I've been waiting was the subject of great rigmarole and kerfuffle.  I hoped for a BACS, only to learn a cheque had been sent to the PO Box back home. Very obligingly, the client sent a replacement cheque to me here in Edinburgh. Can you spot the accidental error that means it hasn't gone through and that I'll be waiting for it into September? 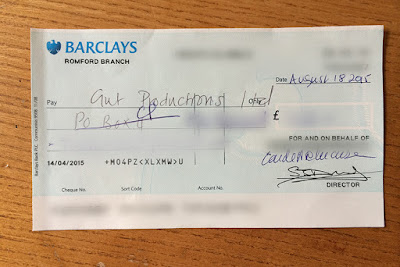 That's right, my company is UT Productions, not Gut Productions. Luckily all the libraries I've done up here in Edinburgh have proved prompt payers. We've got by happily, but really is this any way to run a multinational business empire?

In 2014 I reported the Edfringe season had whizzed by faster than any previous year, so inevitably I have to say similar this year. It has been a busy month, and enjoyable, but it would be crazy to expect Edinburgh to be as full of novelty and surprises as it was on our first year here, 31 years ago now, or even in the first year of the Socks, back in 2007, when I shot a Socks video diary every single day and the future was an unwritten book.

This year I've been an obsessive over my bums-on-seats figures, especially in the final week which saw a surprising slump, after three weeks which had been beating the records of the previous years. Last year I reported that I'd had fewer reviews and high-profile press and TV appearances than before, and this year that trend has continued. Last year I reported that I'd done a record number of extra curricular classes in libraries and schools, this year I have done slightly fewer (7 days in libraries, 1 shopping centre), and slightly fewer extra shows too (Pun Run, Kids on the Fringe, and Forth at Work). Leaving me more time for flyering, which has paid off, except for in this last, dead week. Let me show you the figures. 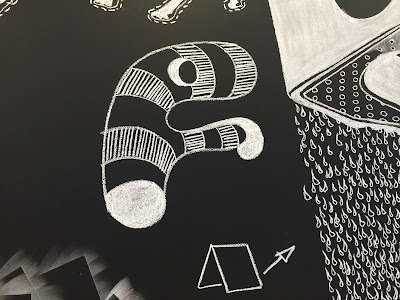 Something looking a bit Socky in a piece by Kemang Wa Lehurle, up on Calton Hill this week.

So as you can see, 2015 has seen a record Preview Weekend and Week 2, with a record-equalling Week 1. All great. Then came week 3, whose flyering statistics I've recorded in a separate blog. Where had all the punters gone, long time passing? I don't know, though I took a little schadenfreudey pleasure in seeing that, on the night that I had my all-time-low audience of 29, the act who goes in 15 minutes before me had only 6 punters. Small consolation.

Week 3 has reminded me of 2012, Olympic year, when Richard Herring noted that the Olympics had sucked the crowds out of Edinburgh like someone opening the door on a spaceship. Tommy Shephard of the Stand has spoken this year of how he thinks the Fringe should be moved further back into July to take advantage of the school holidays more. So let's assume he's had a bad week 3 too.

If anything it was like all the missing punters from week 3 had come to Edinburgh for Preview Weekend instead, as it really was the busiest I can remember.

The show itself, Minging Detectives, was possibly our patchiest. Certainly during Preview week it was still coming together and finding its feet, those audiences seeing some rather messy shows. It's come together into an enjoyable whole, but I'd have to say it doesn't build to as satisfying a conclusion as last year's ...And So Am I.

PC Barbara Dixon is not as good a running joke and linking sequence as last year's Baby In The Corner, with only a few audience members really responding to it. And we lack a meaty performance sequence like 2013's Aliens, Avengers, Star Wars or Star Trek (damn, that was a good show). And the songs are all Marmite this year. Tie A Yellow Ribbon is the most popular, though some don't like the toilet humour; Black & White Minstrels Old Man River Police leaves audiences divided between whether we're being ironic or actually racist; and Hello Muddah Intifada is the biggest room divider we've ever had. I've been praised for doing it, even been told it's "sublime". But when the audiences are less Stewart Lee's crowd and more Daily Mail readers, you can heard the words "too soon" being beaten out in morse code by clenching buttocks.

Gangsta works pretty well, though the 3 recurring sketches are each less strong than the previous, Z Cars and The Sweary are very good, but I wish they had more satisfying endings (they segue into the next item well, but I'd prefer if I'd gone for a punchline and applause), and The Police is a rubbish bit of improv that oscillates between being the funniest bit of the night and a mess that they seem to tolerate. The Bank Job and Duel go pretty well, sometimes excellently, and we end on a high note every night. But next year, we're going to have a great structure and a fantastic all-new* hour worthy of 5 star reviews all round, or else. (*Duel is lifted from 2009's Period Drama). 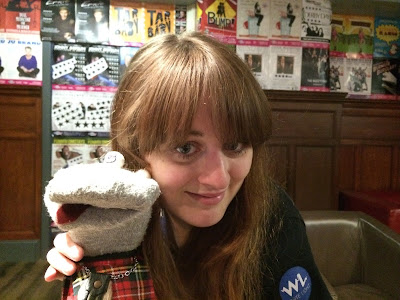 The Socks and our technician Alia.

There has been no scandal, and little to report outside of my show. The Free Fringe has come into its own, with big names like Janey Godley, Joel Dommett and many others going Free this year, though the in-fighting between the various organisations has hit an all time low, of which you'll read plenty elsewhere. Karen's retiring, passing the Gilded onto Katy over the coming years, and the Assembly Rooms are up for grabs again. But no revolutionary news that I've noticed.

If I think of more, and I will, I'll update this. In the meantime, tonight's show won't sell itself, though I've nearly got to the bottom of our third and final box of flyers (got through all 10,000, which hasn't happened since 2012, hmmm) so let's see how we get on.

Thoughts for next year:

If the Socks do Edinburgh in 2016 (and I already have ideas for working title Popsocks) then we cannot rely on flyering alone. In 2014 we took an ad in the programme, might that have helped this 3rd week? We also got lots of reviews in all previous years, and have had our fewest ever this year. Next year we must a) make sure the show is great and reviewer-proof then b) drive them in to see the show.