Get intu this - more fun in shopping centres 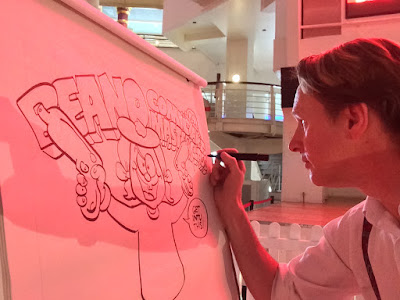 A novel week of classes has continued in intu shopping centres the length and breadth of the country, from Derby to Bromley, Uxbridge to Manchester (stopping over with Mum in Kibworth en route). And if ever a set-up had had me thinking "this will never work" it's the arrangements I've found at these various venues. Take the picture above, for example. A class in the middle of the Trafford Centre, lit only by an overhead screen. It'll never work you'd think. 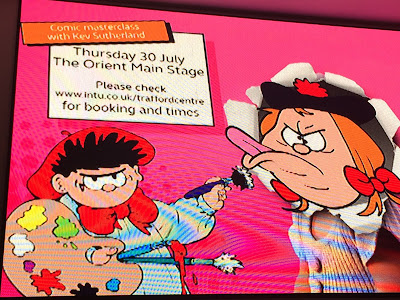 And yet, amazingly it did. And look at me all over the screens, by the way. These intu centres do some top notch graphics, with the Trafford Centre (an amazing place that I'd never entered before) having gone the full mile with screens, as well as banners which were to be found in smaller versions in the other stores. The Beano Takeover promotion lasts all month, with my visits being just a small part of it. 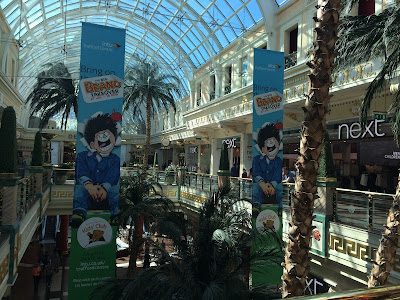 And the classes have ended up being an interesting variant on what I normally do. As you'll know, I excel in presenting a 2 hour-plus class teaching how to write and draw comics, at the end of which everyone goes away with a photocopied comic in their hands. These sessions have been only one hour long, though I've stretched the 10.30 morning session to 90 minutes to get as much in as I can, so we manage to get the character-drawing demonstration in, and they draw their own characters while I do their caricatures, then there's little time to do much else other than a quick quiz so they can win the pictures off the flipchart. I've had a stab at creating a comic front cover with 3 of the 4 morning groups so far, and done the "treads on a worm" demo with 3 of them too. But that proves a test of their concentration given the unusual distractions of a shopping centre. 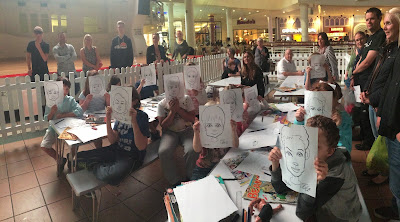 The biggest distraction of all being the ambient noise. In all these workshops, my classroom area has been in a fenced off section in the middle of the mall. And surprisingly the best sound conditions were in the vast and poorly-lit Trafford Centre where I could be heard perfectly. In the other centres, the sound of shoppers all around creates a brouhaha which builds as the day progresses and makes it very hard for anyone a few feet away to hear what I'm saying. 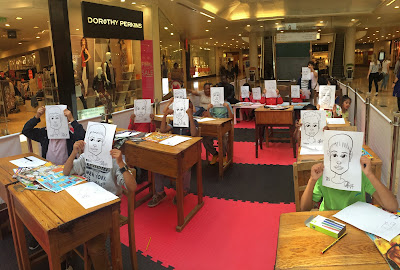 The Uxbridge classroom had been laid out with a nifty Dennis the Menace-striped floor and old school desks with lids and inkwells, and was perfectly photogenic when I arrived. But sadly the desks were scattered so far away that no one could have heard or seen me, so I had to spoil the aesthetics by moving everyone closer to me. Again, it worked and the kids have all gone away with artwork, caricatures, free Beanos, and singing my praises. The parents in particular seem to have been very impressed. 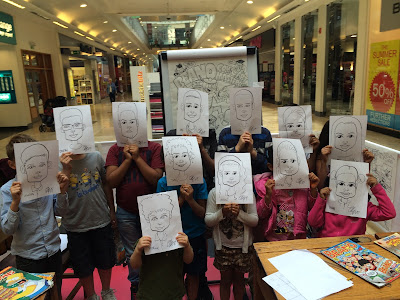 Another big hurdle with these novelty classes is that you can't control the workspace, can't stop people dropping-in late, and can't control the size of someone's family. Which means, though I try and make it clear that the class is suitable for 7 year olds and over only, I've had tiny kids in every class. 6 years olds, 5 year olds, 4 year olds, 3 year olds, you name it, they've wound up in there. And though I'm happy to accommodate them, it does make it some of the performances a little bit of a struggle. Then when they come to do their artwork and, while the diligent 8 and 9 year olds are working hard, the 5 year old says "finished" after 30 seconds and comes up to you with a drawing that looks like someone's given LSD to a spider and told it to make a web, it's hard to find ways to keep them busy. I fear some sessions have seen me go from "visiting star artist from the Beano" to not-very-good creche manager. At least, so far, nobody's burst into tears. 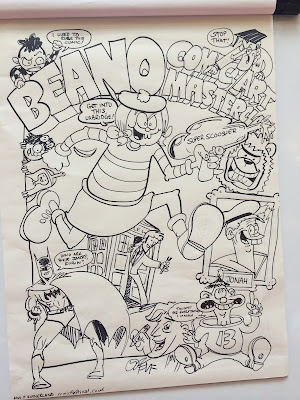 I've also managed to get some good drawings done on the flipcharts, which I do hope all the shopping centres have been treasuring. (They're all in skips 5 minutes after I leave, I know that). Actually it's only the main splash page that I leave with the centre, all the other pages being taken home by kids. For example these two. They ask for a rabbit singing Chas & Dave and a Hulkbuster, that's what they get. 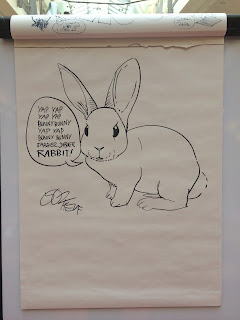 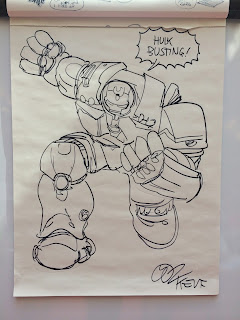 Still to come are Merry Hill in Dudley and Braehead in Glasgow, and my month's run at Edinburgh will have been considerablly boosted in its funding. July may have been a wicked month, and more in the Carson McCullers sense than the modern term, with a solid run of classes in the most testing of situations, but by golly if everyone pays up it'll all have been worth while. (I am currently owed nearly twice what I earned in the whole of 1986. And I sincerely hope they'll all be paying by BACs, cos I drive to Edinburgh tomorrow morning).

Kev F Sutherland, as well as writing and drawing for The Beano, Marvel, Doctor Who et al, runs Comic Art Masterclasses in schools, libraries and art centres - email for details, and follow him on Facebook and Twitter. View the promo video here.
Posted by Scottish Falsetto Sock Puppet Theatre (and Kev F the comic artist) at 07:24

This is a good common sense blog. I am very glad to read this.
Welcome to Green Herbz 2014 Potpourri Herbal Spice