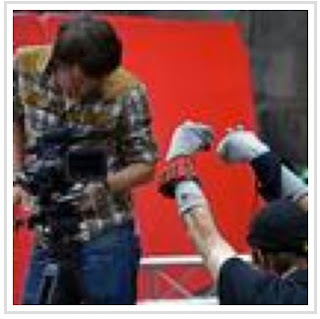 Here's a picture no-one should ever see: some bloke with sock puppets on his hands being filmed for a BBC Three programme on the Royal Mile, I would guess.

For the benefit of future planning, here comes the boring bit, my audit of Edinburgh 2012 (written after the final kids show and before the final Boo Lingerie performance).

2012 itself was unlike any previous year, as we have been going on and on about, with the Olympics effect having knocked almost everyone's takings. Since so many people have been honest about their figures, I'll be honest about mine. An example of frankness comes in this Tweet from Katherine Ryan, also on at the Gilded Balloon, who writes "YEEEAH BITCH to the 1848 bitches who came to see my @EdFringe show. I'm guessing most of you are called Gemma. Thanks Gemma! "

Well I can happily announce that The Scottish Falsetto Sock Puppet Theatre have performed to more than 1848 people this year. Hoorah. However you have to add our morning show and evening show together to get that total (which has exceeded the 2000 mark and still has time to rise). Morning show Chunky Woollen Nits ended up selling 698 tickets which, over the 16 shows (we only did Thurs to Sundays) averages out at 43 per show. Not a bad figure by most peoples standards, and beats our 2008 shows average of 39.3. But it doesn't compare with 2009's 75 a day and 2010's 79 a day averages, which were quite outstanding.

That said, if you combine our two shows, Chunky in the morning and Boo Lingerie at night, suddenly we have an average of 94 punters a day. Which, were we just doing one show and all those punters came to it instead of being spread across two shows, would be a record high. And had we been in our 2010 venue, which was a 90 seater, we would have averaged a 100% sellout. If that is technically possible.

Flyers. When I wrote my Edinburgh audit at the end of 2010's run I said "this year 10,000 was way too many... if I do next year, I would suggest I might be able to survive on a print run of 5000." Well, how wrong could I be? 2012 has required the most heavy flyering I have done since I began bringing the Socks to Edinburgh in 2007. I had 10,000 flyers printed and, after an hour's flyering this afternoon, will have got rid of every single one. In 2010 I had two thirds left over, and a similar wastage in 2009. But this year the painful fact of Edinburgh was that the Fringe goers were thin on the ground, outnumbered in a higher concentration than I have ever seen by Tattooies, the anorak-wearing, often foreign often provincial, hordes who arrive by the coachload at about 4.30, traipse down the Royal Mile once or twice, eat somewhere, then go to the Tattoo in the castle and are shipped out by the coachload at midnight. They never touch the sides of the Fringe, never go to a Fringe show, and are a waste of your flyers. This year most flyers must have gone into their hands. The usual traditional Fringe-goer, with their disposable income and a timetable of theatre and comedy shows at which they're going to spend it, had used that money to buy a ticket to see some obscure sport they'd never previously heard of at the Olympics and, as a result, couldn't also book their week's holiday in Edinburgh. So we learnt how to live without them. This we did by moaning to keep ourselves warm, inspecting our navels for food, and drinking our own tears. Next year will, pray God, be different. I'll definitely be printing 10,000 flyers.

Weather - very good. In 2010 I wrote that it was the best weather we'd seen in Edinburgh since 1984, so I guess this year must have been the best weather since 2010. It's certainly been warm and sunny almost every day, I have worn my shorts and t shirt to flyer every day, and Godalmighty how miserable would we all have been if it had been rainy on top of everything else?

Late nights and shows - a record low for these for me. I think I went to the Loft Bar four times in four weeks, to Late & Live once, and saw only 4 or 5 shows. The art was pretty meh, nothing to rave about or overly slag-off (okay the show at the Talbot Rice where a guy in New York has got some street kids to make some average art, and has spun that out for 25 years, that was about as weak as it gets).

Telly - The Socks appeared on a BBC Three show, did a solo show on the BBC stage and an on-stage interview and performance on Janice Forsyth's Fringe Cafe, and appeared on Forth FM's Front Room Fringe, all highly enjoyable high profile high points of the month. And we did our first outdoor gigs too, playing the Gilded Garden four times, one of which got us a nice prominent photo in The Scotsman, so again all good stuff.

Reviews - all good. See below.

Promotion - This year I made the brave move not to take an ad in the Fringe programme, breaking a tradition we've maintained for every previous year. This saved me about £800 but did it harm box office? Actually, this year, I doubt it did. We'd have needed to sell nearly 100 extra tickets to justify it, and that would have been a big ask this time round. Next year? It may be worth the gamble, and will be down to whether I have 800 quid to spare in February (which, to be honest, this year I didn't).

So finally the shows, how do I feel about them? Chunky Woollen Nits I am delighted with because we proved we could perform a family friendly show which kids and parents enjoyed. It got the better reviews of the two shows and, being a Best-of show, that's understandable.

If anything I'm disappointed that Boo Lingerie contained material that was also Best-of and which also featured in Chunky Woollen Nits. This meant that, if anyone saw both shows, they had to watch Halloween and Sawing A Sock In Half twice. But unfortunately, despite my brave attempts in the previews, I never came up with an entire hour of Socky Horror material for Boo Lingerie that was quite as good as Halloween or that magic routine, so they stayed in.

The amount of material that was cut as we went along was quite unprecedented, and Boo Lingerie has definitely seen the most development through the month-long Edinburgh run of any show I can remember us doing. As the audience interaction grew, and The Socks' confidence with their new material allowed them to busk and improvise, we soon found we were having to cut paragraphs, scenes, and soon entire routines from the show, and still bumping up to our closing time every night. So the Bucket List routine, a new piece which was very well received, found itself bumped a good half a dozen times, and poor old Burke and Hare, which started off as a three minute sketch (featuring the Nicola Sturgeon bit, which I think only one audience ever got to see), has found itself compressed into 30 seconds a few times, and even cut entirely on one occasion (when a reviewer was in, but luckily that didn't hurt us). Frankenstein originally had a song in it, Lembit Opik's Eyes, which only saw the light of day half a dozen times before being lost to the tight timescale, as did most of the Frankenstein sketch. And anyone who saw the early previews in Harrogate, Brighton and Bath will have seen a show only 50% of which resembled the one we even started with here. No extended Poe routine, no Beatles routine, no Ga Ga Rasputin or We Didn't Start The Fire or Boo Lingerie songs, and definitely no cross-channel routine featuring the woman off Bang Goes The Theory. Of the preview audiences, I think only the Bedfringe lot got to see the Gotye song and Thriller, which are both part of the closing section and were very late additions.

So, a show that raced towards the finishing line in every way, but ended up delivering. Next year the working title is The Scottish Falsetto Sock Puppet Theatre in Space, and I want to start creating a brand new hour of sci-fi related material this coming week, and previewing it as early as the Leicester Comedy Festival in February, so this time we really will have an all-new show to knock em all dead. 2013, the year the punters returned - we're looking forward to it already.

Fringe Review ★★★★★ "This is a masterful performance on all levels"

Primary Times (who don't do stars)

The Scottish Falsetto Sock Puppet Theatre presented not one but two new shows at the Edinburgh Fringe 2012: Boo Lingerie - A Socky Horror Show every night at 10.40pm and Chunky Woollen Nits - The Family-Friendly Hour at 11am. I work at the University underneath the Talbot Rice.... and I completely agree with your review of their exhibition!
As for your shows have you had a thought to putting on a show at the Free Fringe (average donation after each show is £3 I believe) to balance off the costs to hire the facilities (I've no idea how expensive it is for your venue hire).