Bananaman Supermarket in this week's Beano - see how it's done 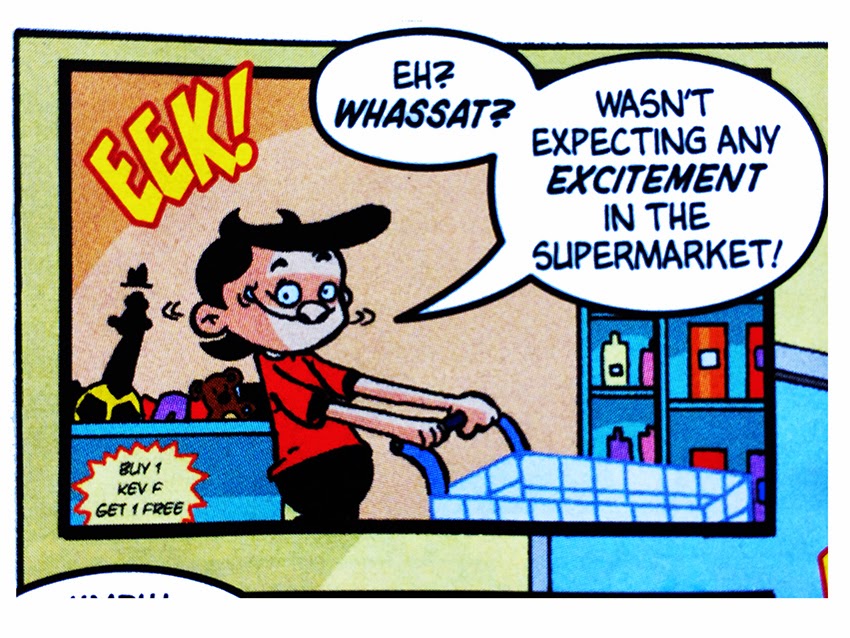 Here we see the frabjuous Wayne Thompson effortlessly and deftly sneaking my name into the background of the Bananaman story Supermarket in this week's Beano, while still defiantly leaving his own name off the strip, leading posterity to allow me to take credit for it (I shall strive to correct posterity at every opportunity). And another fine strip it is, this week continuing the trend of alluding to silver-age comic superheroes by including a Plastic Man lookey likey (for which I have to credit Wayne, who's clearly as big a fan of the classics as I am - did you spot his Billy Batson last week?)

But how does a comic strip classic like this begin life? Ladies and gentlemen, I am proud to present for you an exclusive glimpse behind the scenes. A look inside the mind of one of the leading creative minds of our age. I have here in my hands a piece of paper... that I was about to throw in the bin before I realised it was the rough first draft for what became the typescript for this week's Bananaman story. Check. This. Out. 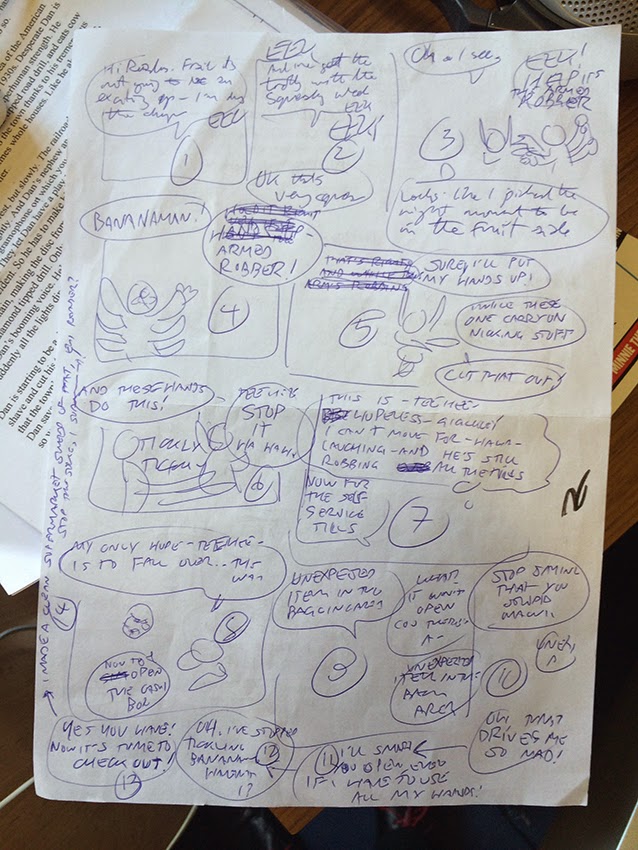 What did you expect? Leonardo? Also starting life this way was this week's Little Plum story, Totem Pole drawn by Hunt Emerson, and Pansy Potter The Strongman's Daughter - Notebook, which I've also drawn. And, yes, my name is hidden in the Pansy strip, but fiendishly subtly this week. Can you spot it? Can you? * 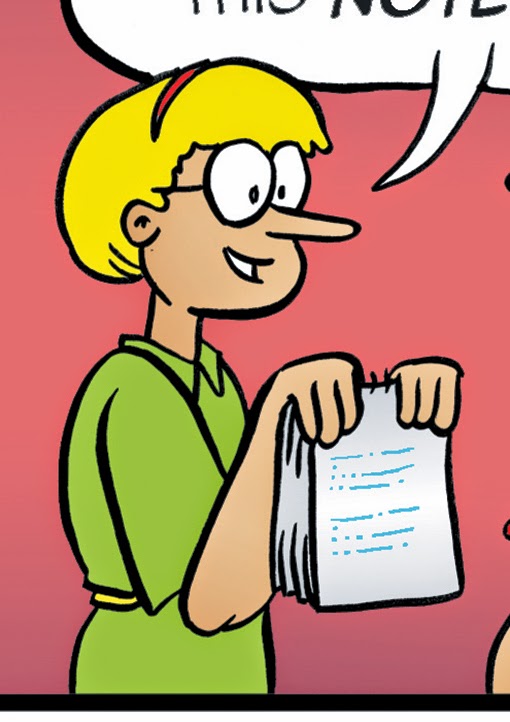 Update: Here's the original dialogue (unused) from the final panel of Bananaman Supermarket:


16               Final panel. BANANAMAN flies away from BEANCOS, carrying the 6 armed ARMED ROBBER  under his arm. Down on the ground outside the store, WOMAN from behind till shouts up angrily, while WOMAN 2 talks into her phone.

BANANA         I MADE A CLEAN SUPERMARKET SWEEP OF IT, WHEN I BAGGED HIM, EH READERS?

PPS: On Facebook, Barth Hulley posts:
I want you to know that my six year old son has been running around the playground shoving his cycle helmet in his friends faces yelling "Unexpected item in your face!"
— feeling proud.

As well as writing Bananaman and drawing Pansy Potter in The Beano, Kev F Sutherland has worked for everyone from Marvel to Doctor Who & most points inbetween, and runs Comic Art Masterclasses in schools, libraries and art centres - email for details, and follow him on Facebook and Twitter. He's been writing and drawing comics for 25 years, he must know something.

* PS: I'm not claiming to be the first person to use that Pansy Potter idea. Readers of my vintage will remember Prohias doing the very same thing every month in his Spy Vs Spy strip.
Posted by Scottish Falsetto Sock Puppet Theatre (and Kev F the comic artist) at 14:27

In the next time section, it shows a picture of Bananaman in his 'John Geering' style. Is it going bak to that style? I hope not

Hi Callum, in my Beano the "Next Week In.." section doesn't show that. Where are you looking?
I know Wayne Thompson is still the artist, though after a few weeks there'll be scripts written by Cavan Scott while I write my new Scottish Falsetto Socks show.

I have just found out that subscriber's next time was different to the normal issue one.

Do you think you will return to Bananaman?

Yes, I have some scripts in the pipeline. And there's still a few of mine to go. Look out for Teddy Bear and the Bell Of Doom.