The History of the Edinburgh Fringe - The Early Days 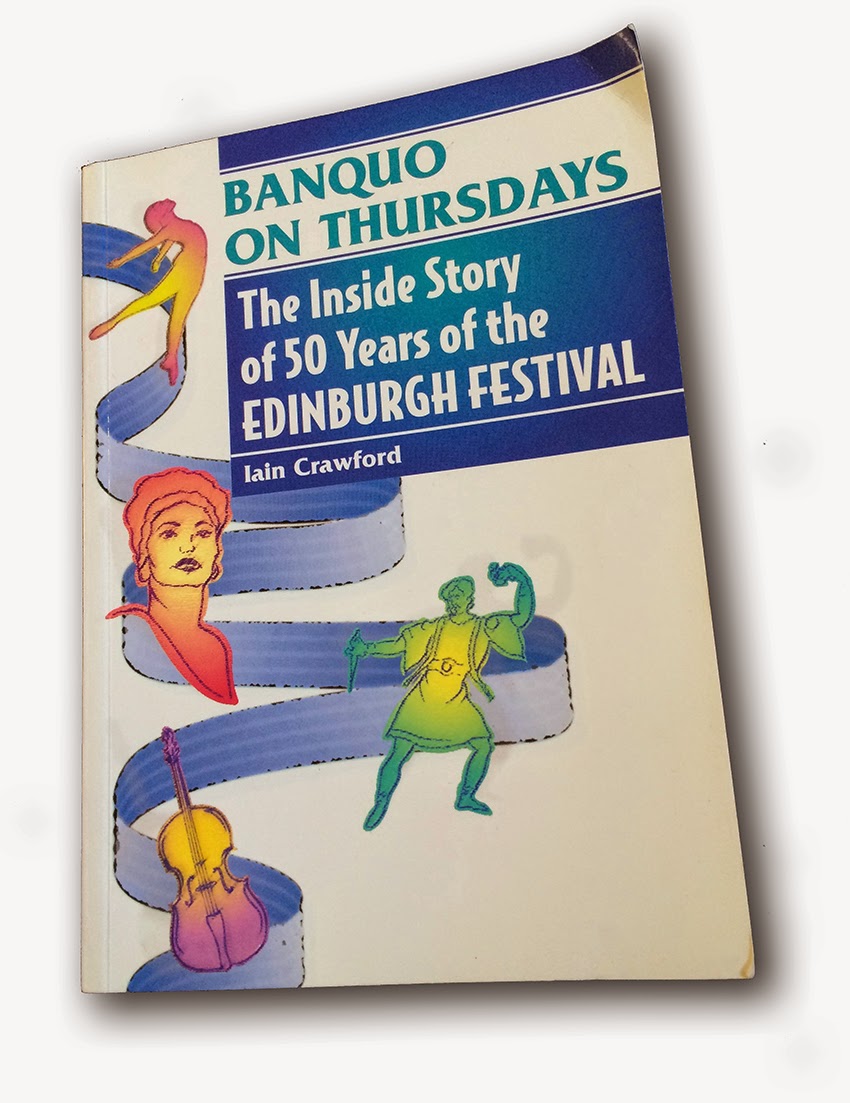 During the month I've just spent at the Edinburgh Fringe, my 10th year staging a comedy show, the 30th anniversary of our first visit as punters, I've given thought, as usual, to its history. I've posted a few blogs of our souvenirs from that first visit (though to be honest I got way too busy to be nostalgic, so most of these things will have to wait to be posted on their 31st anniversary) and have joined in the conversation about the Future Of The Fringe, hoping to put things in a wider perspective through the wisdom of my great age.

However, to be honest, I've never known enough about the history of the Fringe. And asking my Mum, who was an art student in Edinburgh in the 1950s, is no help as she seems not to have noticed the Festival or the Fringe even happening back then. And now I know why.

Last week, en route back from the art exhibition at Inverleith House, I bought a book from 1997 called Banquo On Thursdays - The Inside Story Of 50 Years of the Edinburgh Festival by Iain Crawford. And, though it concentrates on the official Festival, about which I could care less (and which is, we can deduce, celebrating its 67th anniversary this year), it sheds light on the early days of the Fringe.

Or should I say fringe? In its first few, and they are very few, mentions in the book, those shows surrounding the Official Festival are fringe shows with a lower case f. The author himself had appeared in one of the very first Fringe events in 1947, "albeit before the title 'Fringe' had been invented" he notes. In the YMCA Theatre in St Andrew St, Crawford played Banquo in the Christine Orr Players' Macbeth, a show that got reviewed by Kenneth Tynan and EM Forster. It would seem, to begin with, shows on the fringe of the Festival's line-up of Shakespeare, opera, classical music and worthy plays did much the same as the visiting professionals, but as amateurs.

In 1948, BBC producer and playwright Robert Kemp coined the name Fringe in The Edinburgh Evening News thus, "Round the fringe of official Festival drama there seems to be more private enterprise than before". This term quickly displaced the more ponderous Festival Adjuncts, which had been in use until then. But still the Festival, with its contents chosen by committee from professional companies national and international, was the only significant game in town and remained so for some years.

By 1949 the Fringe had acquired its capital F, and Joan Littlewood's Theatre Workshop had joined the party, staging Ewan McColl's The Other Animals. Such 'alternative' events were included in the official Festival's programme, but had no financial support and were not chosen by the committee, which was the Fringe's defining characteristic. Anyone could do it, though still few did. Fringe shows were marked in their desire to innovate and experiment, in contrast to the conservatism of the Festival proper.

In 1958, the stuffiness of the Festival was challenged by Yehudi Menuhin's trio who wanted to take their music out of the concert hall to a new and wider audience. In a move that would presage Peter Buckley Hill's Free Fringe by nearly 4 decades, Menuhin hired the Embassy Cinema in Pilton and wanted to make admission to the one-off concert free. There was however a legal technicality preventing this, so the Saturday morning performance was staged at one shilling per ticket, still well below the price of the Kings, the Lyceum, the Usher Hall or the Playhouse. The 1000 seater cinema was packed, with journalists having to sit on the stairs, and his experiment in reaching the genuine wider non-theatre-going public of Edinburgh was proved when "to Menuhin's delight, they clapped in all the wrong places."

1958 was also the year of the Festival's first widely publicised financial crisis, when the papers ran the story of it having a deficit of £22,000. The City Fathers suggested there should only be a Festival every three years and that the city could not support it. Of course, that didn't happen. The story of a financial crisis at the Festival or the Fringe, and the warnings of doom and disaster that accompany it, has been an annual Edinburgh tradition ever since.

1966's "biggest Fringe to date" saw 33 companies staging 70 productions "ranging from mime, jazz and rhythm-speaking... to plays by Edward Albee, Thornton Wilder and Tennessee Williams" and gave the Fringe one of its first West End transfers in the form of Tom Stoppard's Rosencrantz and Guildenstern Are Dead. Comedy, which had made its mark as part of the official Festival with 1960's confusingly named Beyond The Fringe, was becoming a small presence on the Fringe. As well as revue groups, of which Cambridge's Footlights were acknowledged kings, David Frost had a late night show at The Palladium. In a talk to the Fringe Club, there was a call by John Calder for "two Fringes, professional and amateur", suggesting that "the Fringe had taken over drama from the official Festival."

In 1967 Richard DeMarco, "a one-man Fringe-and-Festival" burst onto the scene with the Edinburgh Open 100 art competition. Modern art became central to the Edinburgh Festival, as Nigel Gosling wrote in the Observer, "Now largely due to one man, the Sixties have broken into the city in force and things will never be quite the same again." Nearly 50 years later DeMarco's home in Summerhall and his massive art archive remain central to Edinburgh's art world.

In 1977 the popularity, and populism, of the growing Fringe was made clear in a speech by retiring Festival Director Peter Diamand who said "I watched... the programme Russell Harty Comes To The Festival. If I didn't know anything about the Festival, this - the Edinburgh Festival which I saw on this programme - I would stay away from it. I mean, it was principally the Fringe and every allusion to 'serious' programmes was carefully avoided."

It was in 1981 that the Edinburgh Fringe, as modern visitors might recognise it, really came to be, when William Burdett-Coutts, "a tall pale-faced, black-bearded Zimbabwean actor-manager-impresario" was given access to the Assembly Rooms on George Street, via the official Festival for whom he was producing a play. He decided that, instead of using the newly-available space for just one play, he would lease the whole building and sub-let it to different shows. The Festival spent "a substantial sum" on the adaptation of the Assembly Rooms Music Hall into a theatre. With this, the first multi-tenanted and curated venue, the pattern was set for the Fringe as we know it today.

That first Assembly Rooms comedy line-up offered a choice between Radio Active starring The Heebeegees (Angus Deayton, Philip Pope and Michael Fenton-Stevens) or An Evening Without... starring Griff Rhys-Jones, Rory McGrath, Jimmy Mulville and a not-yet-famous Clive Anderson (variously the Cambridge Footlights revue teams of 1973-76). I should know, because my Dad and I went to the latter.

Another multi-tenanted (but not curated) venue pre-dating the Assembly Rooms was the Wireworks on High Street which, I learn via Dave Cohen and Bruce Dessau on Facebook, was home to Rowan Atkinson & Richard Curtis's breakthrough show, the venue having been partly built by the performers, with Atkinson driving the JCB. Shows ran there from 1978 until at least 1992, it is now the site of a primary school.

The curated venues that followed the Assembly's model include The Circuit, which occupied a marquee on a building site on Castle Terrace from 1981 - 86; The Pleasance which has occupied a University building on the street of the same name from 1984 to the present day; The Gilded Balloon which took over the former 369 Gallery and adjacent buildings on Cowgate from 1986 until it burned down in 2002 and they found their current home at the University's Teviot building; C Venues in Adam House on Chambers Street since 1992; The Stand, Edinburgh's only permanent comedy club, which began in 1995 and runs all year round, expanding into many more venues for the Fringe; the Underbelly who began on Cowgate in 2001, expanding to include an upside down purple cow in Bristo Square in 2007; and venues many and various such as Southside, Greenside, Just The Tonic, Zoo, The Space, and many more that have come and gone over the years.

The Free Fringe, which has proliferated in recent years, began in 1996 with a show called Peter Buckley Hill & Some Comedians at the Canons Gait pub. In 2002 Peter and the Laughing Horse club joined forces to curate a range of venues where admission would be free to audiences, whose donations are collected in buckets at the end of the show, and whose acts would not have to pay to hire their venues. In 2006 these divided into two separate organisations, and were joined by other companies dedicated to offering a free (or cheap) range of shows to the public. These include the Five Pound Fringe, Heroes Of The Fringe's "Pay What You Want" shows, and in 2014 Freestival.

The birth of the curated venues saw the growth of comedy within the Edinburgh Fringe, whose flourishing in the subsequent 4 decades has been the subject of many articles, one of which I shall no doubt write some time.

ADDENDUM 3/9/14: Returning to the subject, I've just re-read part of Stewart Lee's How I Escaped My Certain Fate, which paints a nice picture of the transition from the 80s to the 90s. I quote...

When I went back to the Edinburgh Fringe... in 1990... my management company (Avalon) introduced bold new ideas to the stand-up comedy scene, such as advertising and two-colour posters. (The innovative idea of insurmountable performers' debts, paid off piecemeal by working for the management company's other departments, was yet to come.) The photocopied bits of paper everyone else pinned up in Edinburgh newsagents' windows suddenly seemed so drab. The eighties were over. The bright new dawn of nineties comedy was rising, and we drove around Edinburgh under cover of darkness in a panel van, flyposting illegally with pots of paint and brushes, like the A-Team with jokes.
...Nobody on the Fringe had seen anything like it. Advertising! ...It was the beginning of the end, and I was an accessory.

The Scottish Falsetto Sock Puppet Theatre do Shakespeare every night at 10.30pm at the Gilded Balloon at the Edinburgh Fringe August 2016. BOOK NOW to avoid disappointment★★★★★ "Accessible, contemporary and ridiculous" - Brighton Argus May 2016★★★★ "Eat your heart out, Olivier" - What's On May 2016 ★★★★ "Comedy genius at work" - Theatre Bath April 2016
Aug 3 - 29 - 10.30pm The Gilded Balloon, Edinburgh Fringe
Posted by Scottish Falsetto Sock Puppet Theatre (and Kev F the comic artist) at 19:33