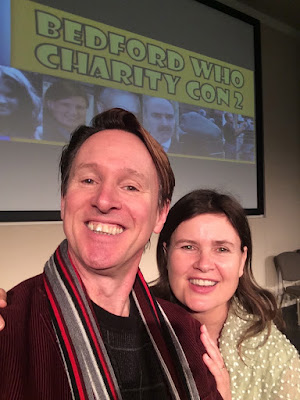 New Doctor Who companion? New Doctor Schmoo Companion! Here I am at the Bedford Who Charity Con with Sophie Aldred, just before the Scottish Falsetto Socks and she did a fun little Ace sketch as part of the Socks show at the con, which went down very nicely indeed thankyou. (If anyone got a video of our performance I'd love to see it) All part of a busy couple of weeks' travel which saw me, a couple of days earlier, in Bucharest. 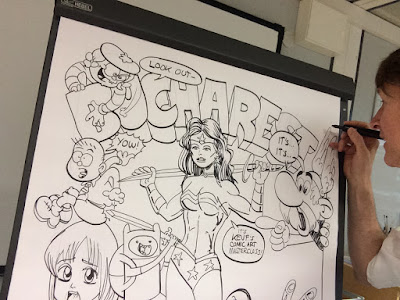 Here's me having fun doodling on a flipchart as part of my two days of Comic Art Masterclasses at the British School in Bucharest, and here's my ridiculously accommodating host, librarian Tim who, with his family, took me out every night and made sure I was looked after every day. 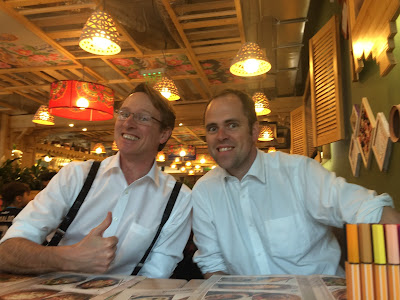 We're in a Moldavian restuarant there, by the way. And I now know much more about Moldova, Moldavia, Romania and various parts of Eastern Europe than I ever did before. I didn't see much of Bucharest, but what parts I did see were characterised by rubbish pavements. I'm sure I'll get to redress the balance soon and see the better-paved parts of town. Until then, this is what I think Romania mostly looks like: 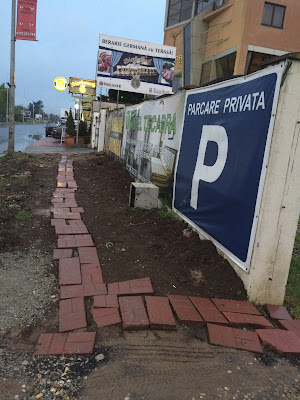 Before Bucharest, the previous week, I managed to squeeze in visits to Glasgow for the Sitcom Trials, Dartford in Kent for Comic Art Masterclasses, Doncaster for their Book Awards, and Sheffield to perform at the brilliant Cabaret Boom Boom with the Socks, while getting some Minnie The Minx scripts written inbetween times. The Book Awards looked like this: 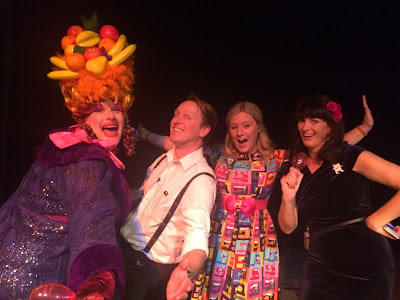 Then to bring us up to date I'm fresh back from a surprising short-notice gig at an 18th birthday party in Belfast, which I didn't even know about till three days before. Mr Whistle-Stop, that's me. Here's my venue: 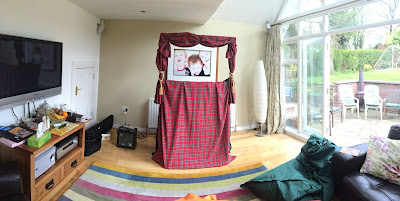 Added to which excitement, tickets for the Socks' Edinburgh Fringe show have gone on sale already. Is this a record early sales start? (Don't know, I'll go and check, expect an update if I find anything). So it's all go here. How many air miles, I dread to think. From April 11th  - 24th I've flown to Glasgow & back, Bucharest & back, and Belfast & back. I've also proved my ineptness for booking some air tickets for next month - to the wrong country! (I needed to go to Belfast at the end of May, I'm currently sat here with tickets for Dublin. Idiot.)

Kev F Sutherland, as well as writing and drawing for The Beano, Marvel, Doctor Who et al, runs Comic Art Masterclasses in schools, libraries and art centres. After a morning or an afternoon every pupil goes away with a photocopied comic containing a strip by every single one of them, and an individual caricature by Kev F. Please email for details, and follow him on Facebook and Twitter. View the promo video