I've posted stuff on Facebook more than I've put it in the blog recently. Stuff like this. 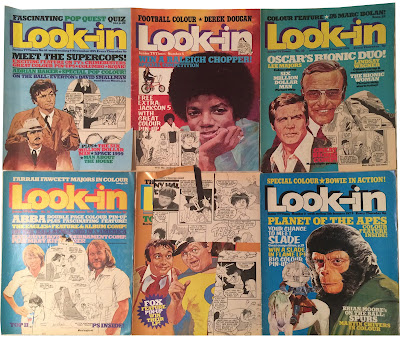 Here's a shot to send a shiver through the spine of comic fans, magazine collectors and lovers of LookIn magazine - half a dozen of my childhood Look-Ins with their covers dessicated so I could use the pictures in my teenage diary. (Diary here: http://my1970sdiary.blogspot.co.uk/)


I'm reminded of a conversation I had with a group of Swedes about Eurovision and why we don't take it seriously. I think both the Swedes and the Brits & Irish see popular music as a source of pride. It's just that we Brits & Irish were prouder of our real music and thought Eurovision music was a lesser genre.
I believe Terry reflected a widely-held feeling about the sub-pop genre of music that Eurovision comprised, he didn't mock it alone. Indeed I believe any presenter who hadn't mocked the content of Eurovision would have been doing a bad job for a British broadcaster. Remember at this time, the early 70s, Britain and Ireland could take pride in having changed the course of international pop music for the past decade and Eurovision's pop was simply a different thing. And, yes, we found foreigners and other ways of doing things funny, in a way that may look provincial and even offensive now.
Terry Wogan didn't spoil Eurovision, he rescued it for British and Irish viewers (and Australians, am I right?). Anyone who took those decades of risible entries (Britain's own included) seriously just demonstrates how different other countries cultures can be. We're Anglophones, we take the piss. I know many people from other cultures don't get this, or see the point in it, so we can only apologise.


I've been doing 1957's word all through this article. Brainiac coined in 1975? Gasp invented in 1968? Laugh-out-loud first used in 1970? Of course it means the words use in that precise regard (gasp as an ironic exaggerated response, laugh-out-loud as an adjective) and it refers only to their first appearance in print (Bagsy definitely pre-dates 1979 because we used it for many years in school, and I left school in 1979). But a fun bit of nonsense all the same.

How to find the word born in the same year as you
The powers that be add new words to the dictionary all the time - but have you ever wondered how recent the language you use everyday is?
INDY100.INDEPENDENT.CO.UK

The good news? I just finished The Secret History Of Hollywood / Attaboy, Clarence 's excellent Bullets and Blood podcast, all about the Warner Brothers and Jimmy Cagney. The bad news? That's the last one! I've listened to every one of these excellent podcasts. Help, are there any other podcasts anyone can recommend that are as good as this? No chat, no making-it-up-as-you go along, just pure, well-written, well-read authoritative info (in this case on Hollywood, but I could be interested in any subject if it's this well told). Anyone?


This is a bit dire for the BBC. 7 top execs have left in the last half year, 25% of staff told they could lose their jobs, and as one BBC insider puts it, it feels as if “a lot of the adults have left”. Meanwhile ITV look promising, only so they can sell the bleeding company. Oh well, British telly being the best in the world was good while it lasted. I'm glad I was around to see it.

Turmoil at the top leaves the futures of ITV and BBC in the balance
As Kevin Lygo adds BBC drama boss Polly Hill to his new team, the corporation must move to boost morale
THEGUARDIAN.COM|BY TARA CONLAN

In 1981 my Dad took me to the Edinburgh Fringe as we were passing through, and had me choose the one show we should see. There were two shows on at the Assembly Rooms, one was RadioActive. We went to see the other one. Glad to get a second chance. (The show we went to see was An Evening Without... starring Rory McGrath, Jimmy Mulville, Griff Rhys Jones & Clive James, since you ask).


This afternoon's More Or Less (BBC Radio 4, unmissable) ran the stats to answer the question "have more celebrities died in 2016 than in previous years?". Even I was surprised by the answer. (Here's the show:http://www.bbc.co.uk/programmes/b076prgl )

Oh no. Seems Henry DOES finish first. RIP David Swift: his turn in Drop The Dead Donkey is a real favourite (though I was also very pleasantly surprised to see him pop up when I rewatched the BBC Day of the Triffids too).


Kevin Fiege says "look at the comics" to see how the Marvel movies might develop. But having read the excellent Marvel Comics: The Untold Story you learn how haphazard and made-up-as-it-went-along the development of the Marvel Universe was back in the day. I was lucky enough to read the comics thru the 1970s when the writers and artists valiantly tried to get away from just superhero stories (Conan, Man Thing, Howard The Duck, Planet Of The Apes, Dracula, Killraven, Deathlok etc were the stuff I far preferred to the superheroes). Only now I learn they got the chance to do this because the comic line was expanding exponentially only cos the guy in charge was misreporting sales returns and running the books like a Ponzi Scheme. Unless that's what Fiege is aiming to emulate, in which case bring it on!