Journal Of The Plague Year - May to June

Really? A month without writing a diary? In truth, drawing Prince Of Denmark Street has kept me delightfully busy. It’s been the best feeling, knowing what I have to do every morning, then going to my desk and doing it. And at the end of the day having between two and four pages drawn.

(Work in progress on PODS here, and the new book here) 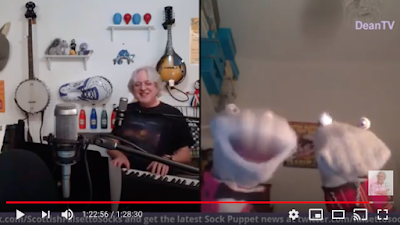 Dean Friedman’s DeanZine Live Streams on alternate Sunday nights have been my only Scottish Falsetto Sock Puppet Theatre gigs. On April 19th we debuted Stay Two Metres Apart and did the What Kind of F&C Song; May 3rd we duetted with him on Lucky Stars and debuted Miley Cyrus; on May 24th we debuted The Bechdel Test Song, and on June 7th we duetted with him on The Deli Song. These have been the greatest fun and such an honour.

Felicity’s fortnightly Zoom quiz parties, which are the same weekends at the Dean shows, have been our only communication with the rest of the world to speak of. On May 23rd it was Tom’s Birthday Murder Mystery Night, which we curated and briefed everyone on, sat at Doris Hatt’s 1930s house in Clevedon. On Sat 6th June we did the Conservatory Escape Room. Others have been straight quiz nights, where Hev & I’ve loved making up questions which, I’m sure, no-one has enjoyed answering. I love answering other people’s questions, so maybe I’m getting more out of these parties than most.

May 7: Be honest, whose heart lights up at the words "is returning with a Lockdown Special?" 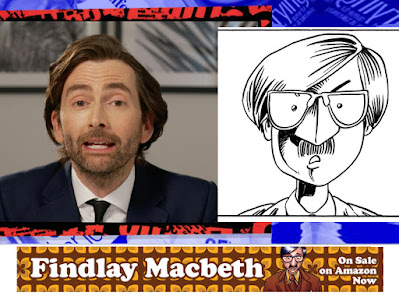 May 8: Was David Tennant auditioning for the role of Findlay Macbeth on tonight’s HIGNFY?

May 14: The Covid story - which episode are we in?

I’m finding it quite exciting not knowing which episode of the Covid Story we’re in. Is it the first chapter, or the end of Season One?

It all hinges on what happens following May 10th’s “Stay Alert” plot point. If nothing happens, infections continue to fall, and it all goes away, then it turns out we were at the end of Season One, and the disappointing Season Two will be more about the run up to the US election than anything else.

But if we get the Commuter Conundrum from the crowded tubes and buses, or The Clubhouse Cluster episode where every golfer and tennis player gets it, or the subplot of the Estate Agent Superspreader, it could be that we are in fact only at the end of episode one, and the season’s only just starting.

May 16: The Lockdown movie-trawl continues to see us watching things we might have otherwise overlooked. Here are two corkers from this week - Adult Life Skills and The Breakfast Club.

Adult Life Skills is by first time writer/director Rachel Tunnard, based on her award winning short, and it stars Doctor Who. Simple and sweet.

And I'm probably the only person who'd managed to let 35 years slide by without ever seeing The Breakfast Club. John Hughes truly was a brilliant and original film maker (I can watch Home Alone and Planes Trains & Automobiles forever) and this has stood the test of the decades well. Feeble ending notwithstanding (spoiler alert) it's an excellent bit of writing and directing.

May 21: The jury's still out on Sweden. I was, a month back, keeping track of Sweden's Covid death toll, but found it wasn't telling us anything conclusive. Today we learn Sweden has the highest death rate per capita in the world from Covid. But that still doesn't tell us anything.

Meanwhile New Zealand has all-but eliminated Covid from the country, meaning that as soon as they let in an infected tourist their Covid pandemic restarts from scratch.

The UK are somewhere in the middle. Unlike New Zealand and Sweden, the UK didn't have a plan. Or rather they started with the Swedish plan ("Herd immunity, and if a few pensioners die, then tough" - Dominic Cummings), then when they realised our hospitals wouldn't be able to cope with that rate of cases, they moved in the New Zealand lockdown direction, but far too late. And here we all are then.

It will be months before we can start reaching conclusions about what was the best thing to do, who did the best thing, and what people did wrong. In the meantime, judge not lest ye be judged yourself, I guess.

May 22: (The Dominic Cummings story breaks)

Who do we forgive for breaking the rules, who do we let off because we like them? Round 1: Dominic Cummings v Neil Gaiman.

Sources close to Dominic Cummings defend his trip from London to Durham while he had virus symptoms.

May 24: Dominic Cummings is let off

Disastrous. This is where the Second Wave of infection begins. From this moment on no one will heed any instructions for lockdown. If a government employee can flout the clear laws and guidelines, then nobody will feel bound by them.

This cowardly decision has killed people. (Says he, hoping to be proved wrong.)

The good news is, we live with 250 miles of loads of great places, so sightseeing trips are back on.

Don't worry, we plan to kidnap a 4 year old child to ride shotgun. We know the rules.

The lockdown has disintegrated, whether by cockup or conspiracy (and my money's on cockup). This week, quoting "Cummings Rules" we drove through the centre of Bristol for the first time in 2 and a half months (we live ten miles away) and even stopped to buy something. It looked like a normal weekday except most shops were shut. I'm sure most of you can report similar experiences from the last two sunbathe-and-barbeque weekends.

The problem will come if this much vaunted Second Wave is really big, as some say it will be. Chances are places like my town (in North Somerset, the whole county of which has had just 444 cases and 94 deaths) have seen nary a microgram of coronavirus in all this time, and any drop of it that's come to town has been avoided till it died. If, as is feared, the first tourists bring it for, effectively, the first time and we have a super-ballooning of cases, how will anyone impose a lockdown again?

June 1: You know what I've always wondered? Whose job is it to put Trump's toys back in his pram every night?

June 2: Today I am buying ISBN numbers. Rather optimistically I am buying a pack of ten, instead of just the one I need.

From this we can conclude the pandemic will end tomorrow, I'll get back to work in schools, and will never have time to write another book.

June 7: That feeling when you get a survey from a car hire company asking how much you enjoyed the car you forgot to cancel from your cancelled flight this weekend! 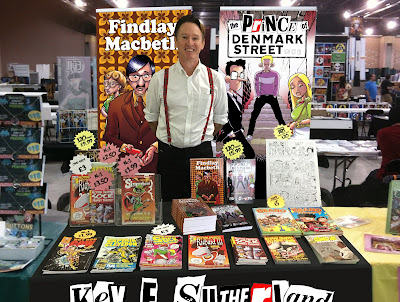 June 15: Here's what you're missing. The convention table you could have seen me sat behind at Satellite Conventions Glasgow & Lawless: A Celebration Of British Comics Bristol & #LFCC & The Lakes (you still might) & Bath Comic-Con and more...

Who's organising any social-distanced cons? I'll sign books and throw them at anyone who wants one! 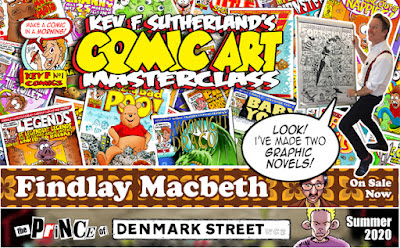