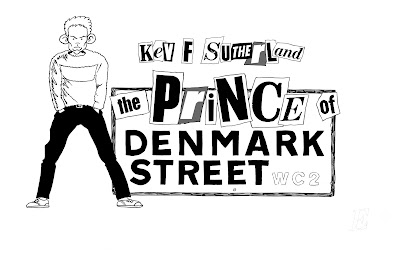 Prince of Denmark St – Shakespearian graphic novel made during lockdown

What did you do during lockdown? This guy wrote and drew a 120 page graphic novel, adapting Shakespeare’s Hamlet and setting it in punk era 1970s London.

Kev F Sutherland is best known for his work as a writer and artist for The Beano (on Bash St Kids & Bananaman), for Marvel Comics’ Dr Strange & Star Trek, and countless humour comics from Oink to Viz and many more. He also gives Comic Art Masterclasses teaching kids how easy it can be.

It’s a comic strip adaptation of Shakespeare’s tragedy like you’ve never seen it before, giving the familiar tale a unique spin.

Having produced his debut graphic novel in March, Findlay Macbeth, Kev had lined up book and comic festivals galore to promote it at. Then came lockdown. So, with no schools to visit either, he had no choice but to start work on a brand new book.

The Prince Of Denmark Street is set in London’s Tin Pan Alley in 1977, where young Prince Hamlet and his band The Danes are rising stars. But when he discovers the story behind the death of his dad, the rock & roller King Hamlet, he goes off the rails. The story takes Shakespeare’s original and adds fiendish twists he hopes you won’t see coming.

The paperback also includes the full text of the play, illustrated by Kev F.
­­
Anyone who wants to make this a palpable hit can support the project on Kickstarter from as little as £3, and can bag themselves original artwork, specially drawn sketches and other goodies. Kev F is available for interview, and images from the book are available to reproduce.