My first Zoom Masterclass - it's good to be back 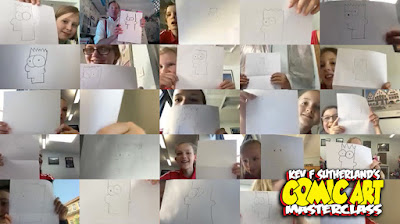 If anyone wants to book my Comic Art Masterclass this summer, I'm delighted to announce I can now do the whole show by Zoom!
Thanks to an excellent teacher at Red Maids Juniors in Bristol who brought this about, I delivered my first day of online Comic Art Masterclasses on Wednesday, via Zoom, and I'm delighted to report they went well.
I had had the greatest trepidation about offering this, having no idea whether I'd be able to bring the experience of my live classes to the small screen. But it worked. Although, for a large part, you have to keep the sound of the pupils muted otherwise it's a cacaphonic mess, it was possible to tell that they were laughing in the right places, and I even got an audible 'wow' at one of the apt moments.
These particular pupils, years 4, 5, and 6 at Red Maids, are well versed in Zoom classes. They've been doing them all term and are totally up to speed with muting and unmuting themselves to ask questions. This meant I was able to work with three large groups in the day, something that's not possible in an actual classroom. Getting 25 faces to a zoom screen, my first one hour class (with years 2 and 3) was a simpler affair, to two screens worth, the year 2s all being in one classroom together.
Then the full two hour classes (4 & 5 in the morning, 6 in the afternoon) were to three screens worth of pupils, so over 50 of them. I simplified some parts of my usual class, so for example choosing the title for the group comic was done by selecting from just half a dozen suggestions, held up to the screen, rather than from the usual 30 ideas scribbled on bits of paper. And instead of doing all the examples on the flipchart, I did a lot of the "How To" drawings on A4 sheets on clipboards, which again worked fine. Hoping I get to do more of these, I can see how I can refine and expand these parts so we get more stuff that I design for this working method, rather than just adapting my previous routines. Given the large class sizes, only half of them could get their caricatures drawn, but we agreed that in advance and the teachers had chosen who would be drawn. 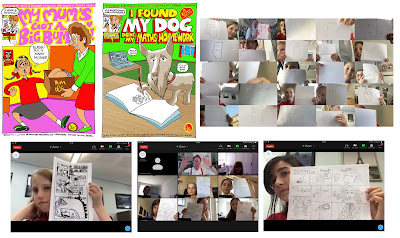 Because there was no travelling to be done, the class cost the school less than it would normally, and the time I would have spent in the car was spent finishing the front covers off, and doing additional caricatures from photos of kids who hadn't been able to be drawn live. NB: Caricatures drawn on Zoom suffer from one slight problem in that I'm looking up everyone's noses. It was hard to get them to position their faces so they were looking straight on to you. So they may go away thinking they all look a bit more nostril-y than they do in real life.
We weren't able to produce the finished photocopied comic, obviously, and because most of the pupils were working from their respective homes, it's not even something the teacher would be able to do. But, as has been the case in many classes before, if the kids aren't expecting a comic in their hands, they don't miss it. The teacher was kind enough to tweet the above photos of year 6 pupils holding up their work, which was of the highest quality, as good as I get in a hands-on class. (I wish we'd managed to get a shot of them looking less miserable. Trust me, they were smiling almost all the rest of the time!)
I shall now be plugging myself furiously to all my schools, as I now feel confident in offering these classes, and it would be great to get back to proper paying work again (not that I've not been enjoying being a full time graphic novelist, but I would have to see 100 copies of one of my books to earn as much as a day doing classes). The only tiny niggle I have is claustrophobia. Once I was doing the classes it didn't trouble me at all. But setting up the room, I was aware how much space a flipchart stand takes up. Once that's erected in my little studio, I'm left with as much space to work in as a space shuttle cockpit. And no one gets to see my legs. I'd forgotten how much physicality there is in my usual classes.
It's good to be back! Most satisfying to have done my first Comic Art Masterclass in three months (the last was at Baldock Arts Centre on March 14th). Let's see if I can arrange any more. 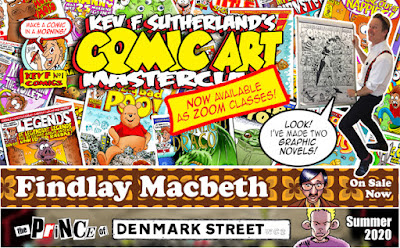