The 3rd Book - Work In Progress 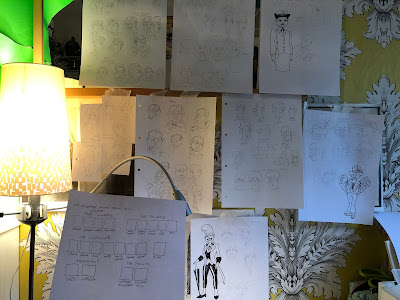 And so, though my thoughts are seriously turning to starting making money again, hopefully with virtual classes and maybe even the start of genuine live appearances again this summer, work has begun on a third book (as Findlay Macbeth starts to make a few tentative sales, and Prince Of Denmark Street is 14 days from the end of its Kickstarter campaign).
Thurs June 5th - First 6 page treatment written of new book (at that point called The Midsummer Night's Team)
Friday June 5th - 2nd draft treatment
Sunday June 7th - 3rd and 4th drafts, after 2 lots of notes from Steve, and initial notes from Hev. Draft is now 9 pages, title is now The Midsummer Nights Dream Team.
Thurs Jun 11 - Characters designed. All 21 of them (above)!
Fri 12, Sat 13 - First writing done. 13 pages biro scribble.
Tues 16 - First draft biro script finished, 35 pages.
Weds 17 - Script broken down into rough panels. 517 panels in current form. (Findlay Macbeth was 475 panels, Prince Of Denmark Street 490 panels). UPDATE: Just realised it's 517 panels + the opening 15 silent pages (yes, it opens with a silent sequence). We got us a long one! 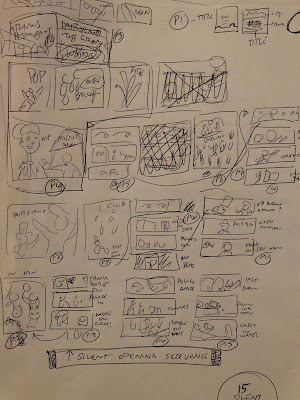 That opening 15 page sequence, as it currently stands. Hopefully I know what it all means.
Friday 19th - Script broken down into pages. It's 120 pages, again. (Findlay was 120 pages at this stage, later extended to 125, PODS was 114 pages, later extended to 118). Here's the most boring photo you'll see today: 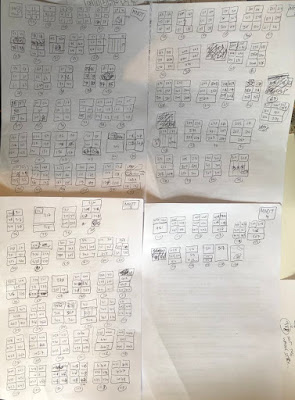 Saturday 20th June - designed a logo for the front cover. Sunday, decided this will be known as the rejected logo. Sets the wrong 'parody' tone for the book I think... 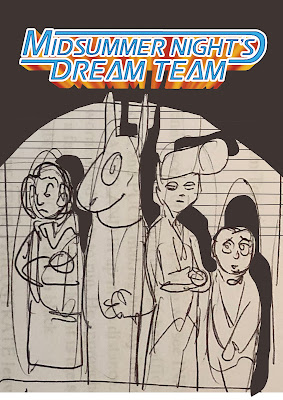 I began writing PODS in the first week of lockdown, on March 20th. Rough script finished March 31st. 5 days to lay it out into scripted laid lout pages, 7 days to produce pencil roughs. In the end I drew 118 pages, and covers, and extras, between April 16th and June 1st. 6 weeks & 4 days, or 46 days, to draw 118 pages. Two and a half pages a day.

10 weeks from conception to completion for PODS. That means the new book could be completed by the 25th of August, unless I hurry up and get some proper paying work in! Blimey, I could even finish a fourth by Christmas and be a fully fledged pauper.