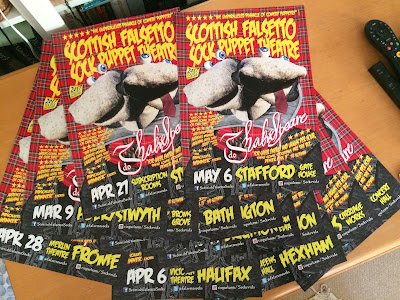 And this is what a load of Socks tour posters looks like. Actually I just took this photo to remind myself that these were the order they arrived in. Rather unhelpfully (but how was he to know) Jez at Thatcopyshop had shuffled them, rather than group them. Which meant, after I'd taken this photo, I then had to rearrange the 140 posters into 14 piles of 10 in order to mail them to their respective venues. Like so... 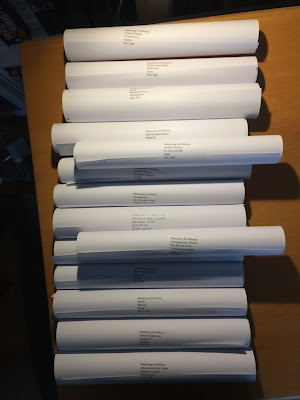 That's what 140 A3 tour posters looked like, rolled, labelled and about to be posted (for the record I attached return address labels and sellotaped up the overlaps, after this photo). All of which I'm recording now, purely to remind myself in future that this is when I did it this year. (Also if the accountant disputes the £39.90 I spent on 2nd class postage one day in the run up to Christmas, I can prove it was 14 lots of £2.85 for this, not pressies.) If it puts bums on seats, it'll be worth bearing in mind.


The reason for this timing was, urged on by one of the venues, so that our posters will be up and seen at the various theatres' peak times for audiences. They'll see us through the Christmas and panto season, all going well.

These posters haven't gone, yet, to all the venues on our tour. Only 14 of them, most likely to have stuff happening this season, and who already have our tickets on sale. Some venues, eg temporary ones like Kayal in Leicester and Dram in Glasgow, don't really have places they can poster, or people to do it, and some venues later in the tour have yet to put stuff on sale.

Hey ho, what with this, listing all the venues on the Press association, making Twitter ads for them all, oh and Christmas, I'm getting none of my actual artwork done this week (colouring Book Of Esther. I'm one and a half pages in, thought I'd be halfway through by now!). But needs must when forward planning calls.