Hallelujah, let everyone rejoice. On Thursday night (Jan 19th) I finally got all of The Book Of Esther coloured. Well, look more cheerful about it you two. 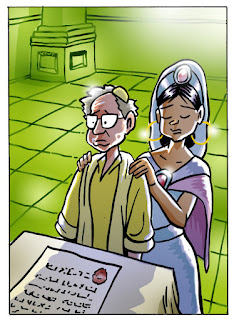 It really has been a mammoth task, taking nearly as long to colour each page as it took to pencil or ink them. I started by trying to keep the colours simple, but as I progressed it was clear that I was only happy when I was adding a layer of shadows and a layer of glows. And I couldn't fill any character with just flat colour, as one might with The Simpsons or most Beano strips, I had to give them all a white edge to sculpt the colour of their faces. And the outlines of the backgrounds, I couldn't just leave those in black, I had to go over and colourise all those lines to knock them back further. And before I knew where I was, I was doing a maximum of two pages a day. I think I managed three pages one day, but for many others I was only getting one page done, through the knock on effect of other work.

But hooray, now it's done. And, though I haven't quoted on it as part of the original job, of course I'm now going to have to design a front cover. But that notwithstanding, I have a completed job I can deliver to my editors.

Oh yes, talking of distractions, in the meantime (ie last Sunday afternoon) I was inspired to turn the Book Of Esther into a musical. I wrote not one, not two, but ten songs - lyrics and a rough demo recording with vocal only - for the musical, taking us chronologically through the first half of the story.

The songs so far are: Title Song, Party Like It's 460BC, Xerxes & Vashti, Bride Wanted, I Could Be Queen, Not Everyone's Good, I'll Wait, Pampering Song, Wedding Song and Teresh & Bigthana. We definitely have the new Jesus Christ Superstar on our hands here. (Hev got me a book for Christmas about how to write a musical. I've not started reading it yet.)

Kev F Sutherland, as well as writing and drawing for The Beano, Marvel, Doctor Who et al, runs Comic Art Masterclasses in schools, libraries and art centres - email for details, and follow him on Facebook and Twitter. View the promo video here.
Posted by Scottish Falsetto Sock Puppet Theatre (and Kev F the comic artist) at 09:50