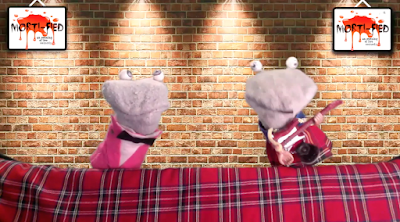 The Socks are starting to notch up the guest slots in comedy shows that they otherwise wouldn't be able to afford to do, this week adding a corporate gig to their list.

On Thursday night they did a five minute slot in a gig for a company called Devere, organised by the enterprising Jessica Forrest. Admittedly the forty quid we got for it doesn't quite compare to the usual corporate rates (an Avalon act might ask four grand for the same gig), but we did a great slot and got good feedback. I also drew a caricature of the boss as part of my stint, something which only came about after my earlier chat with Jess coincided with me finishing an art class and showing her the caricatures I'd just drawn.

Then on Saturday night the Socks did a 12 minute slot in Mortified Comedy (above), the first online venture for a comedy club that formerly ran every month at a venue in Tamworth. Thanks to the efforts of its organisers Darren and Mark, who also work on Radio Tamworth, they'd drawn a splendid crowd (they had more than 60 in, and would have had more but they'd capped the ticket sales to try and keep the audience controllable). A grand line up of stand ups was capped by a closing set by Patrick Monahan which, thankfully, the Socks were on just before. 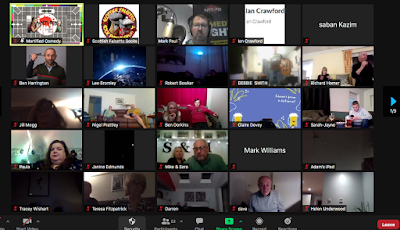 We came up against a technical problem that has dogged us recently, namely the failure of the sound on our video clips. I can hear it perfectly, and so, oddly, can about a quarter of viewers. But most people can't hear the sound from the video clips. This happened first at one of our shows last year, but sorted itself. Then it happened again before our last two shows and needed remedial action - a switching on and off of a Privacy setting, then a re-starting of Zoom - in the moments before the show. This time, despite two complete turnings off-and-on, the music would only play to a few. So we did our gig without music.

This means I have pre-recorded performances of What Kind Of F&C and Sweary Poppins, in front of a Mortfied Comedy backdrop, that will have to go unseen.

For the corporate we gave them Exorcist, Airline Puns and an accapella Walk On The Wild Side, which fills five minutes. This was pretty much the same set they'd had at the Frenzy gig. For Mortfied they got Exorcist, Airline Puns, Walk On The Wild Side, and all of the Magic routine (NB I must amend the sawing-a-sock-in-half prop so it stands up on the Zoom set. It rather flopped right at punchline). 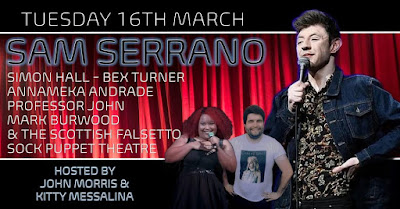 We have two more guest slots lined up, at Chicken Box in Derry, and Late Stage comedy club, as well as our next solo show lined up for March 19th (which is, I discovered belatedly, Red Nose Day. Meaning I'll be the one show that night that's keeping all the money to itself. I may have to do something additional to make amends). 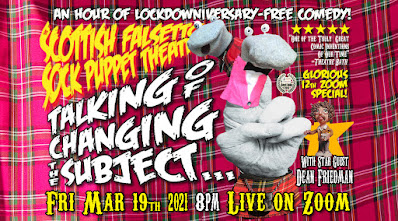 Mar 19: Talking Of Changing The Subject… 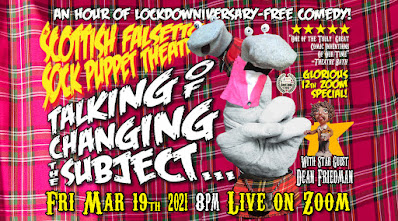