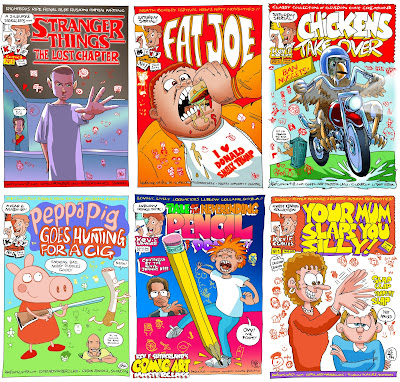 More fun nonsense dreamed up by kids, and some grown ups, at a cluster of Comic Art Masterclasses from Swindon to Neath, via Clevedon and Ludlow. 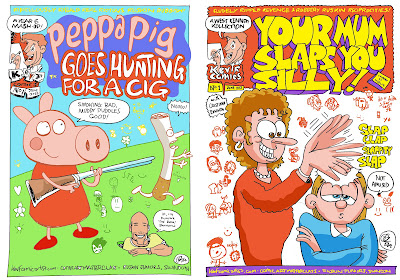 Ruskin Juniors is a school that, I realised, I've been going to for probably 12 years now. I worked this out from the Tardis mural they have on the side of a portakabin, which has the date 2011 on it, and I remember going there before that was painted. A dinner lady told me her son had had my class in year 6, and he's now 23. 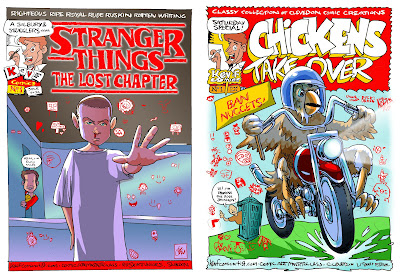 Ruskin day 2, a half day, gave me a good cover to draw (and was less controversial than the Peppa Pig title, above) while the Chickens cover comes from a class, the previous Saturday, at Clevedon Literary Festival (after which I sold 50 quids worth of my books, which is something I'm able to do with public classes where the parents are watching from the back. More of those, please.) 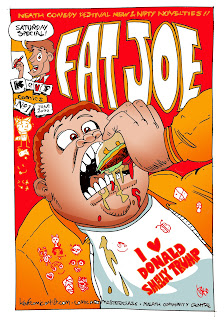 Fat Joe came from a one-off class at Neath Community Centre. Similar to Clevedon in set up, this class was funded by the Neath Comedy Festival, meaning I got my full fee even though it was quite a small class, and it kept the ticket price down. Only £15 of books sold afterwards, which is fine. 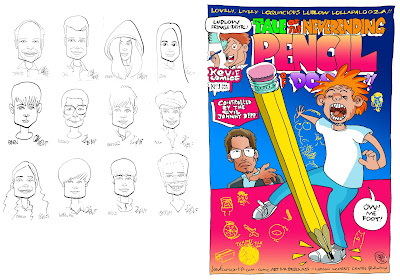 A class at Ludlow Fringe, lined up to be part of a package with a Socks show in the same venue that night, was fun. Being a doorsplit, it won't have been my most profitable class of the season, but they're always worth doing. Another £15 of books sold after, so that's par for the course. 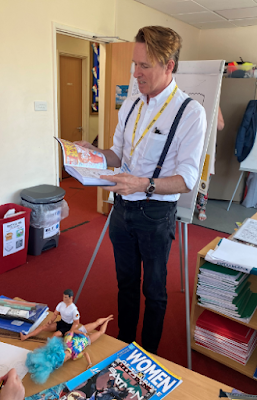 The celebrities these six groups chose to appear in my demonstration strip were Elon Musk, Donald Smelly Trump (their giggle-inducing words, not mine), Dwayne 'The Rock' Johnson (twice), Johnny Depp, and Cristiano Ronaldo.