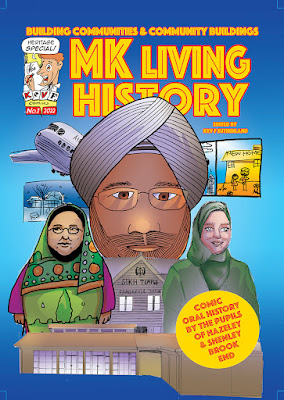 This was quite the last minute job, considering it was also nine months in the making.
I've done a few jobs with the Milton Keynes Islamic Art Foundation, including two 8 page comics on migration and local communities, both of which seem to have been well received. So this job was to be more of the same. The method is that the pupils at MK schools do oral history interviews with locals, and I come in with my Masterclass and get them to turn the interviews into comic strips, which I then polish off, colour up, and assemble into the printable comic.
The slight snag this year was that, when I arrived at each school, the kids had no transcripts of the interviews, or even notes from them, and we had no visual material to begin with, no photos of the interviewees. Added to which some kids in the class hadn't been involved in the interviews so they had literally nothing to go on. No words, no pictures, and no idea what had been said in the interviews. Quite the raw material to work with.
However I got them producing imagery, in one session at Shenley Brook End last December, then another at Hazeley Academy in May. But I still had no interviews. These were sent me me as video clips, with the idea being that I'd transcribe them. And that remained an idea, floating in the air, while I got busy with lots of other work.
Then I get a phone call, on the Thursday before we go to Edinburgh, asking where the finished comic is! I spend Thursday working out how to transcribe these interviews, then I spend Friday and Saturday morning flying up to Inverness and back to play at the Belladrum Festival. Then i spend Saturday afternoon and Sunday transcribing, writing and assembling this comic. I get the black and white version delivered to the client on Sunday night, before we drive up to Edinburgh on Monday morning. 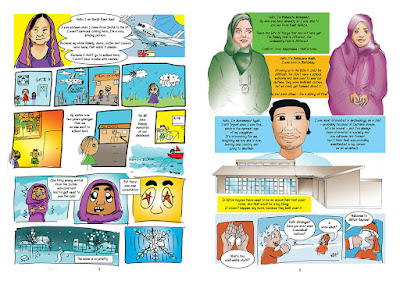 We arrive in Edinburgh Monday afternoon, and I find an email telling me they like it. Hooray. I just have a couple of logos to add and, oh yes, I have to colour all 8 pages. All while settling into Edinburgh and preparing for my tech on Tuesday and my first night on Wednesday.
And what do you know, I did it! Hooray. It is such a satisfying feeling to get an 8 page comic written, lettered, coloured, delivered, and approved by the client in such a short time. I send off the coloured printable version on Wednesday morning, did one tiny amendment in between flyering and show, and bingo it was done.
This has been a self-satisfied pleased-with-myself comic artist post.