10 more versions of Bananaman to bend your mind

Since I posted 10 Versions Of Bananaman last week, more and more keep cropping up. Here's another Top Ten, starting with.... 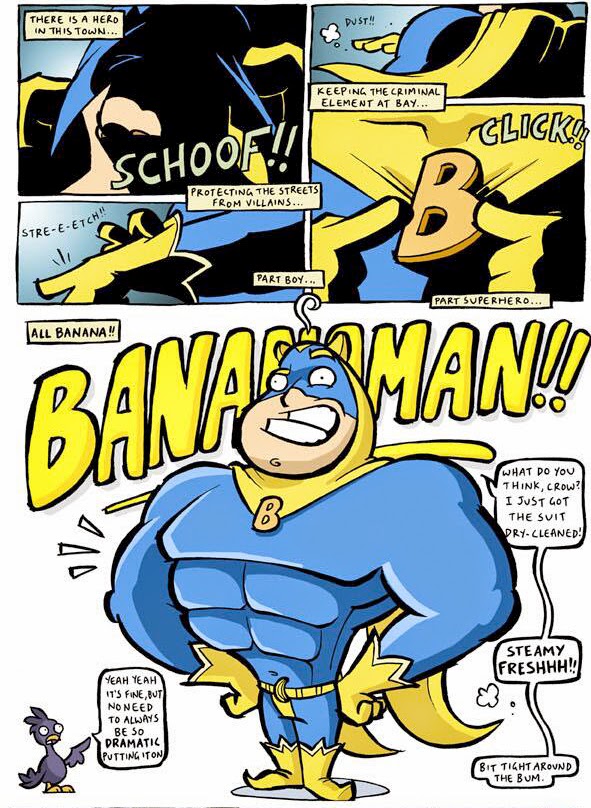 10 - Jamie Smart's Bananaman. This never saw print, which is a great shame as his revamps of Desperate Dan and Roger The Dodger were legendary (and may make their way into a book some day if there's any justice). 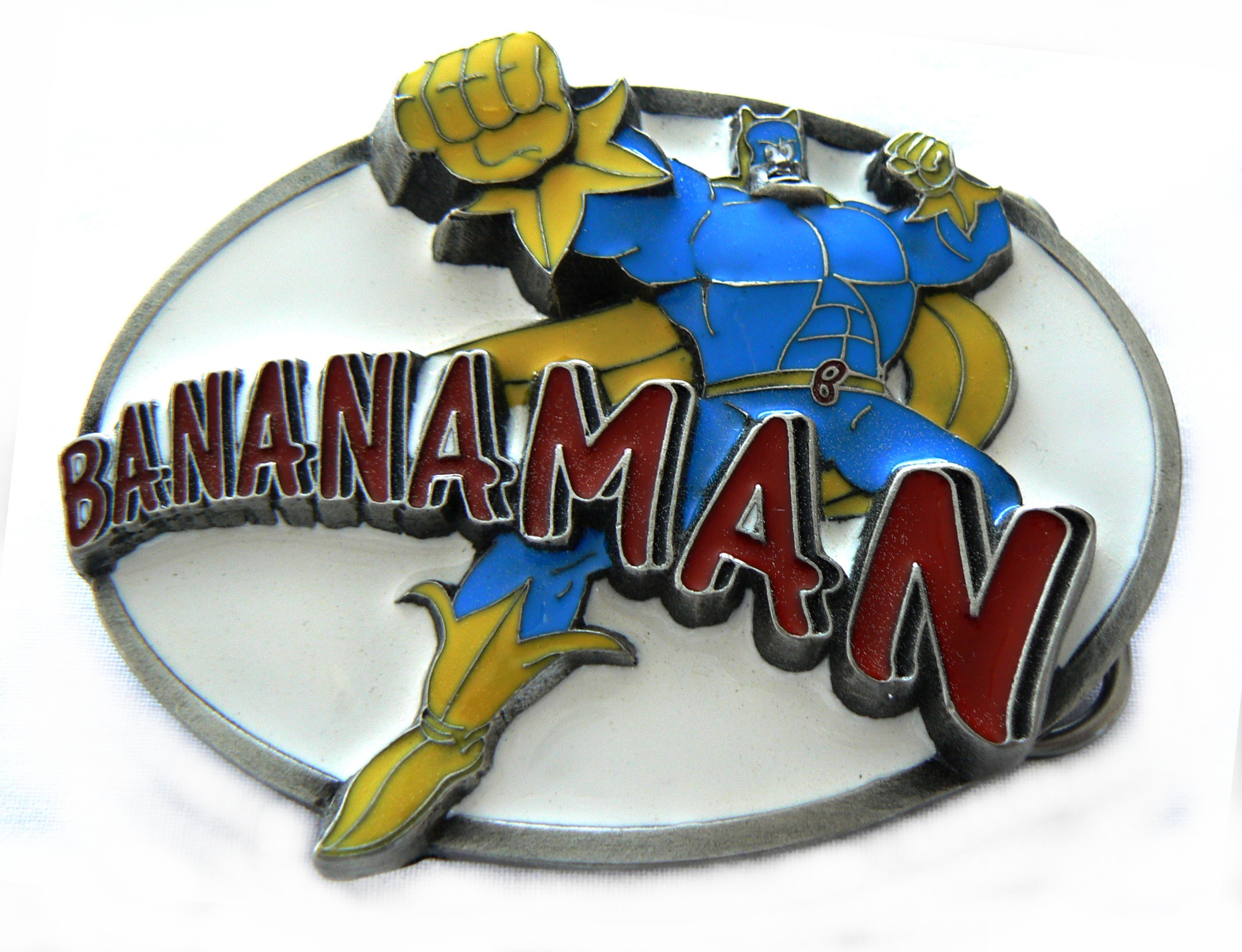 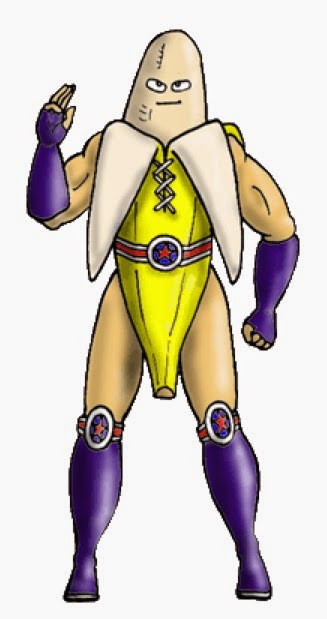 8 - A Taiwanese Bananaman. I can't claim to fully understand where he's from, but he's on the Kinnikuman Wiki where it says he's "A Taiwanese choujin competing in the Choujin Olympics: The Resurrection. He made it to the third round in the preliminaries but came short to Kinniku Mantarou in the "Beach Flags Yeah" competition and was eliminated out of the Olympics." So now you know. 6 - Another Bananawoman, this time by @Sparky597 on Deviant Art. So her bum transforms first, then her chest. Yes, I can't see that going down well in The Beano. Or in the 21st century, come to think of it. 5 - A realistic Bananawoman. About whom I can't tell you much more than I found her here. And she's Fairtrade.

4 - Bananagirl. Created by the brilliant Lew Stringer for his Super School series, she's Bananaman's neice. A crossover has yet to happen but I'm sure it's only a matter of time. 2 - Banana Minion. Once you start scouring Deviant Art, you never stop finding stuff. I won't bore you with some of the Bananamen that are out there, but this is above average, by @sloth79 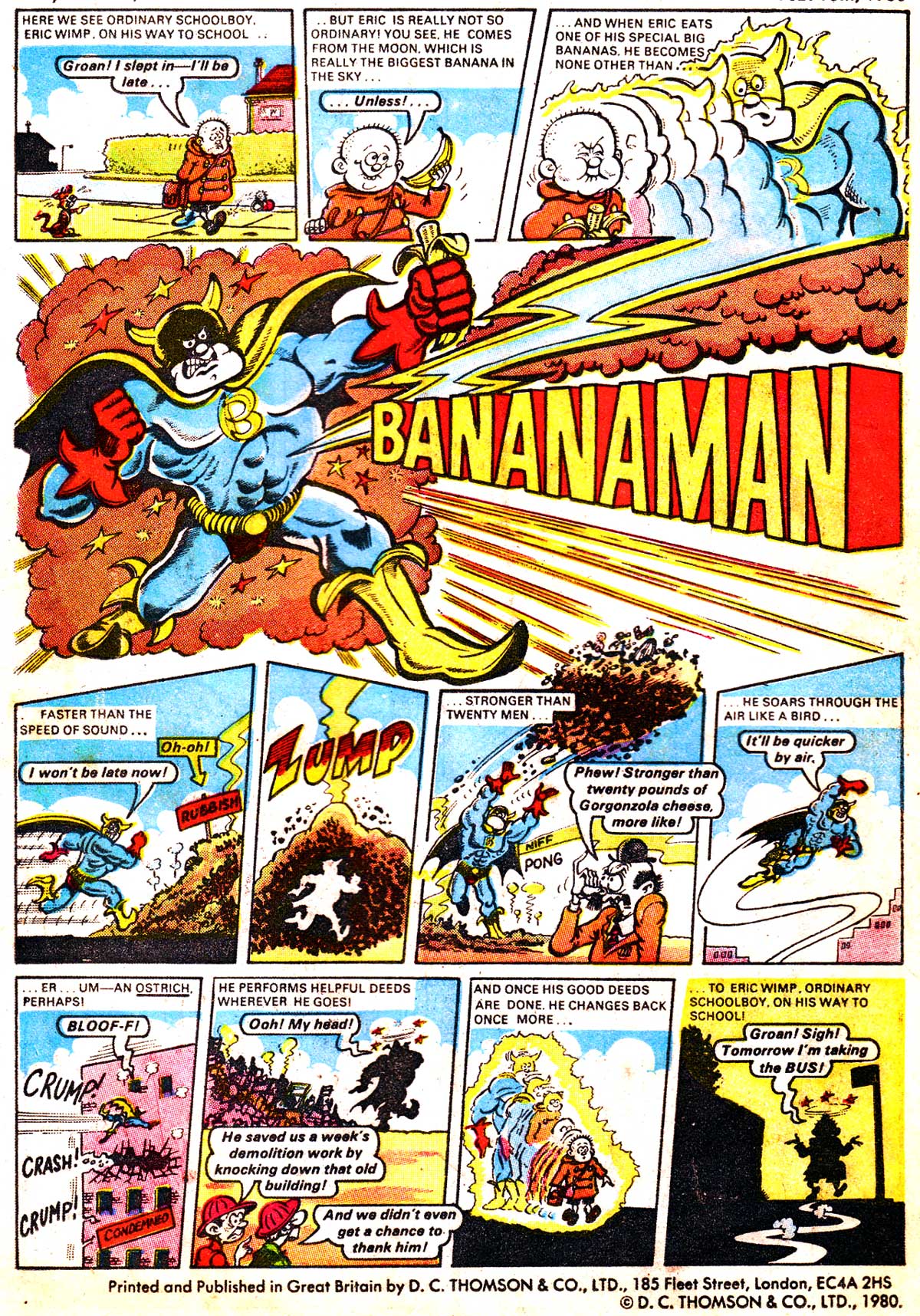 1 - Bananaman's very first appearance. Courtesy of John Freeman's Down The Tubes, (artwork copyright ©2014 DC Thomson & Co), here's the very first splash of the Man Of Peel from Nutty Comic No 1, February 1980, written by Steve Bright and Dave Donaldson, and drawn by the late great John Geering. Our hero's costume's changed since then, as has the look of young Eric, mostly under John Geering's hand - it was his style that was replicated for the TV cartoon, and reprints of his strips appeared in The Beano as recently as 2013 - but the essence of the strip remains the same. Very silly, steeped in parody, and encourages healthy eating. Long may he reign.

Cheers Kev. I think Bananagirl was created by Alan Digby, ex-Beano editor. It was certainly a staff invention anyway. They left it up to me to visualise her though.

The Australian Bananawoman was created for a pen and paper roleplaying game, Champions. http://en.wikipedia.org/wiki/Champions_(role-playing_game). I used to be a total Champions-head :-)