I watched the final episode of Doctor Who series 6 this morning (I was out last night) and parts of it were excellent. But then I'm sat here watching JJ Abrams' 2009 Star Trek movie and, in its first 10 minutes, it's reminded me of what was missing from Doctor Who last night: we're both welling up here. I'm not saying every show has to make you cry, but I think there's quite an argument for having characters who you care about, then making things happen to them that you can understand, worrying about what's going to happen to them, then getting a genuine emotional tug when whatever happens happens.

Maybe I wouldn't feel such a loss of emotional oomph from last night's Doctor Who (the perplexingly titled Wedding Of River Song, suggesting a girly-family-friendly tear-jerker which this couldn't have been less of) had it not been for the past half dozen years of the show since its return in 2005. Look at the past end-of-series episodes and let's see if I know what I mean:

Parting Of The Ways - Christopher Eccleston's final episode. Although at this stage the programme is mostly about Rose Tyler and her travels with an enigmatic alien. When she saves the universe then gets a kiss from The Doctor, it's tears all the way, at the end of a series which has grabbed a brand new audience from the start and made them love it. We've discovered Daleks, who are genuinely the scariest things in the universe, we've had our first timey-wimey story, the brilliant Father's Day (which asked and answered the question of what would happen if you stopped your Dad dying in the past), and we've discovered some of the best writers in TV, not only Russell T Davies and Paul Cornell, but perhaps the most exciting, Steven Moffat. In the final moments The Doctor dies, which we weren't quite expecting, and he regenerates, for the first time in most viewers lives. It was impossible at the end of that not to say "I want to see more of this!"

Doomsday - Upping the emotional ante, we lose our hero, Rose Tyler, and so does our other hero, The Doctor, and as they part he whispers something in her ear but doesn't get to finish it. Oh come on, we all know what he's saying, and if we're not welling up when he's cut off, leaving him streaming with tears, we've not been paying attention. A splendidly emotional end to David Tennant's first series where we've successfully transferred our fondness and sympathies for Rose to him. We've had a perfect example of timey-wimeyness meeting romance in The Girl In The Fireplace, and our first hint of classic-Who nostalgia with Sarah Jane & K9 in School Reunion. Now we're in tears and suddenly Catherine Tate appears in the Tardis. I want to see more of this! 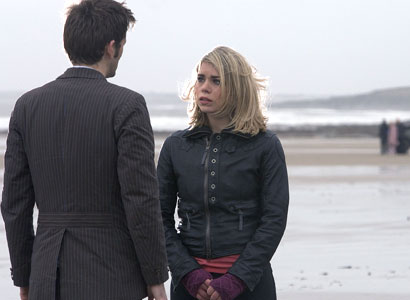 Last Of The Time Lords - Actually I found this series ending a bit of a let down, with the whole Master and Martha story getting a bit silly and messianic, and the storyline of Martha's love for the Doctor being nonplussing. But after a series containing Blink & Being Human it was going to be a hard ending to pull off, and despite Martha's family being hopelessly forgettable, and their parting a bit so-whattish, it was at least emotionally true to itself. And then the Titanic crashed through the Tardis wall. Knowing more of this quality was bound to lie ahead, I wanted to see more of this!

Journey's End - Was there a dry eye in the house? Not in ours. We say goodbye to Rose again, and a spare Doctor, and to Donna - possibly the best-loved companion of the series so far - and she's not allowed to remember any of it? Heartbreaking stuff. And with Donna at the heart of so much of it, the series has been very much about a double act of equals, The Doctor and Donna, about whom we care equally. I want to see more... you knew that was coming.

The End Of Time - This time it really felt like milking it, with half an hour of bloody farewells, to everyone who'd mattered in the preceding four years, wrung out to an excruciating extent. But if you want to sign off after five of the best series of the best TV show ever, you're entitled a bit of indulgence. Because this wasn't self-indulgence, this was Doctor Who lovers-indulgence. A relationship had been forged between the viewers and all these characters, with the storytellers' priority always being the characters and their relationships. The plots, twists, surprises, puzzles, games - the Maguffins - were always there to drive the characters. No one ever made the mistake of thinking viewers would be more interested in the solution to a puzzle than what would happen next to someone they cared about. Ooh, then The Doctor turned into Matt Smith and was about to be written by the most exciting of the writers on the show so far, Steven Moffat. I so wanted to see more of that.

The Big Bang - Hmmm. After 13 episodes, I felt I liked The Doctor and the way he did things - in the same way I used to like Sylvester McCoy's Doctor - and I had loved some of the bits of television making in the series, The Eleventh Hour remaining my most watched episode to date. But I had been unimpressed by a lot of the stories (Victory Of The Daleks and Cold Blood were not successful at all) and worst of all I did not care about the other people in the story. Amy Pond, whose back story, future story and all over story arc, has been the most thought-through, forward-planned, and carefully calculated of any companion, ended her first season not being someone I believed in, cared about, worried for, or loved. Was it that Amy and Rory were put in peril a bit too often and escaped a bit too easily? Or that Rory kept dying with such regularity that it started to seem unimportant? Whatever, The Big Bang & Pandorica Opens were such rollicking roller-coaster rides they were hard not to enjoy, in equal measure to their being hard to explain to younger viewers. I loved them and, at the end when Amy & Rory elected to come along for the ride, I seconded that emotion. I was not, though, sure how much of an emotion it felt like.

The Wedding Of River Song - This series has been the most frustrating. Though the characters have been made no more real or realistic, with the Death Of Rory now being a running joke (and, I have no doubt, a t-shirt as a parody of South Park - if there isn't one I'll make it myself) - there have been some really effective touching stories, particularly The Doctor's Wife (the Tardis story), The Girl Who Waited and The God Complex (though why Paul Cornell hasn't been asked to write a story for the last two seasons starts to look vindictive, as if no-one wants to be properly shown-up). And the storytelling pyrotechnics in the Steven Moffat stories have been impressive and enjoyable. He has been very very funny, very very inventive, and has done things with TV storytelling that have never been done before. I would gladly compare his writing in these seasons favourably with Dennis Potter. That is praise indeed. But the vital component of the empathy between the audience and the characters at the heart of the story has been sacrificed. Too much of the show has been puzzles awaiting solutions, and too little has been about people who you love and what is happening in their believable lives. I am amused and entertained by River Song but I do not believe she is real or truly care what happens to her. The first time I saw her she died, and everything she's done since has been in some way contradicted or denied. That's not someone with whom a viewer bonds.

And the final moments of last night's episode? The "big question" that we're supposed to care about? Is... "Doctor who?" What? We're supposed to want to know the answer to that question?

I don't want to see more of that.