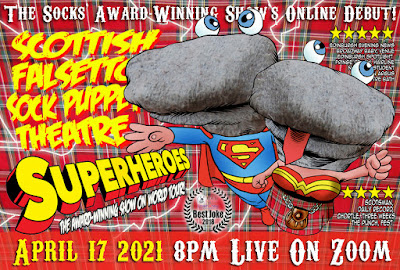 The Scottish Falsetto Socks are proud to announce the online debut of their award-winning 2018 show Superheroes, on Zoom on April 17th. Looking forward to this, one of our favourite shows. Tickets are here on We Got Tickets and also here on JokePit.

I've been running the two box offices concurrently and seeing which does better. The Jokepit link is used for all Twitter plugs, and the Facebook listing, ensuring that Jokepit themselves share it. We Got Tickets is used for the mailing list. For last week's Talking Of Changing The Subject this resulted in 12 tickets sold on JokePit to 28 sold on WGT. For next week's Social Club sales currently stand at 3 on JokePit and 3 on WGT, while Superheroes currently has 8 sold on JokePit and none on WGT.

Talking of Talking Of Changing The Subject, it was a very successful show. Not only a healthy turn out (40 paying punters, plus a few guests including the comics who'll be doing Social Club and friends) but a good few people said it was our funniest show. Given that the last couple of shows have included experiments like Murder Mystery and Quiz Night, I can see how a return to straight comedy could be very satisfying. Also it had almost no new material, being full instead with classics, most of which hadn't been seen for a while. we gave them...

Intro routine - What's Missing Off Telly (from 2010, last seen in Adelaide 2012)
I'm A Sock song - with music performed live for the first time*
Ship In A Bottle / Formats routine (from 2010)
The Western routine (from 2009)
I Change The Key/ Johnny Cash song (2009)
Hovis Advert (from Quiz Night)
An Actor Prepares Routine (from Shakespeare)
St Patricks Day routine (2010)
- DEAN FRIEDMAN 1st song
Coke Advert (didn't do this, as by this stage we were, to my surprise, overrunning)
Interred Routine (2010)
Bingo routine (new, planned for Social Club. Now rewritten for then.)
Always A Bastard song (2010)
Postcodes routine (didn't do this as we were overrunning)
Falling out - "where's Dean Friedman when you need him?"
- DEAN FRIEDMAN 2nd song - Well Well Said The Rocking Chair (v popular choice)
Spectre song (on video, from 2015)
Finale - James Bond, ending with improv.
We Can See You song (didn't do, as ended well with Bond)
*We're now able to perform music live, playing it from iTunes. When we first tried this, I couldn't get the sound to play through Zoom. Now I try it and it works, so no more pre-recording songs on video, unless they need special green screen effects, as Spectre did.
I'd gone through the planning of the show thinking this really didn't look like an hour's material, and in the end had to cut a routine, a video, and a final song. That's always the best way round, and the punters seemed happy. Enjoyed a pleasant 90 minutes in the aftershow bar too. 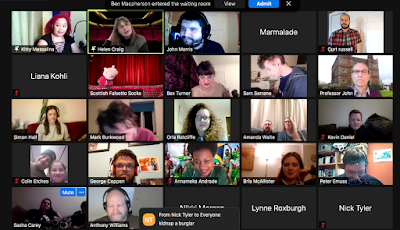 Our gigs this week were:
Tuesday 16th March - Late Stage Comedy. We gave them An Actor Prepares, v good. See it here. Good size audience (in the 30s I think). A good range of mostly stand-up material, from which I plucked Sam Serrano to headline Social Club (and also Simon Hall, who makes good use of on-screen graphics).
Thursday 18th March - Jolters Barrel Of Laughs. Darren Hoskins club, with a very good fun local club feel. Good size audience, into the 40s, inc regulars. Some of the acts a little old fashioned in material but a good mix. The Socks tried out James Bond (which we then rewrote for our Friday show) and Bingo (ditto). First time I've dared use one of these new material nights to actually test out new material (more usually preferring to make a good first impression). 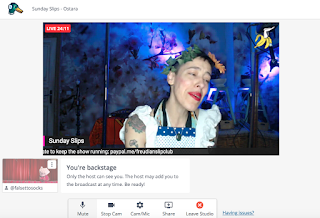 Sunday 21st March - Freudian Slips. An interesting one, on Streamyard so you can't see or hear the audience. Had art and variety, including a burlesque dancer interviewing her Mum, a band performing live, and art video clips, so a very different mix to previous clubs. From Berlin, so another international feel to the show. We gave them An Actor Prepares (during which I was suddenly worried because I knew we'd given them a pre-recorded set for last week's show and couldn't, for the life of me, think what we'd done. Luckily it turns out we did Richard III then). 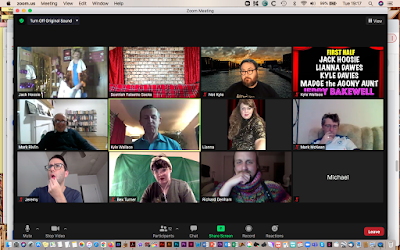 Tuesday 23rd March - G&B Character Comedy. A very good variety bill of novel characters, hosted by a magician who did a very good performance of the nail-through-hand trick. My favourite act was Kevin The Nerd who uses model figures to tell stories, again making excellent use of the Zoom screen. I'd like to get him on Social Club if we do more of this sort of thing. The audience comprised mainly the acts themselves, but there were a lot of those so that was good. We tested out Batman v Joker, which went well. You can see clips on TikTok.
Oh, didn't I mention the Socks have made their debut on TikTok? All the kids are doing it, so I edited up some one minute clips from Friday's show, and our G&B appearance, and uploaded them. After a couple of days we have 120 likes, 6 followers, and our most watched clip has been seen 383 times. I don't think that makes us influencers quite yet.
Gigs coming up:
Fri 26 March - Henn Night (10 mins, headlining, Streamyard)
Sun 28 March - Dean Friedman show
Fri April 2 - SOCIAL CLUB
Weds April 7 - Super Fun Comedy Show
Thurs April 8 - Chicken Box Comedy
Fri April 9 - Comedy Pops
Sat April 10 - Merthyr Comedy Fesy (good lord, a paying gig)
Sun April 11 - Larklord
Thurs April 15 - Social Distance Warriors
Fri April 16 - Blue Suede News
Sat April 17 - SUPERHEROES
Sun April 18 - Sounds Proper
Fri April 23 - 27 Minute Comedy Hour
How's that for a gig schedule? We are getting out there on the open mic circuit like the Socks have never done. Let's see how much of this leads to gigs in the real world, shall we? Let's just keep killing them, it's all we can do.
Posted by Scottish Falsetto Sock Puppet Theatre (and Kev F the comic artist) at 08:54