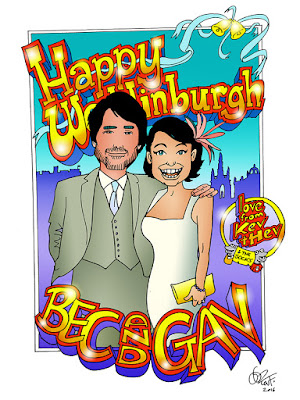 Monday 15th August will have to go down in history as one of our most memorable Edinburgh days ever. We were lucky enough to be invited to the wedding of the century, Bec Hill & Gavin Innes at the Gilded Balloon.

I've known Bec & Gav since the Socks played the whole month of December 2008 at Winter Wonderland in Princes St Gardens, Bec was working as an assistant at the Gilded Balloon and just starting to do her first tentative stand up. She also cut and dyed her own hair, which was a lop-sided peroxide blonde at the time, and so disliked by her employer that she paid her to get it professionally cut and recoloured (correct me if that's not true, Bec). Gavin was a clean shaven, tall handsome lad who, I later discovered, had gone to Bell Baxter in Cupar, the same school as my Dad.

Eight years later, at yesterday's wedding, I met the woman who does Bec's hair and make-up for the DC Fancast shows she presents on Sky, and Gavin was rocking the most incredible Edwardian facial hair which makes him look, for all the world, like one of the busts at the Scottish National Portrait Gallery circa 1900. Probably Robert Louis Stevenson.

And yesterday was their wedding, quite the most stylish rock and roll event we've been to. Gavin had, famously, proposed to Bec on stage during her show at the Gilded Balloon two years ago. Today's ceremony took place in the Debating Hall, the Gilded Balloon's largest venue, which was filled to capacity with friends, family, and lots and lots of comedians. Johnny & The Baptists played us in, Steve McNeil led us through a round of Wifey Wars (a variation on their long established Wifi Wars show) while the couple signed the register, and the vicar was a hilarious star act. The whole event was streamed live on Facebook, and you can probably still find it. 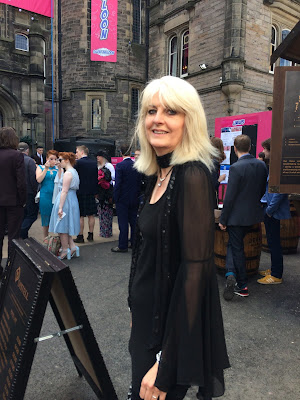 Hev and I spent the afternoon with Paul Gannon and his fiancee Amelia, who we met for the first time and get on great with. A lovely relaxing afternoon talking nonsense and getting slightly out of the Edinburgh bubble, while very much being part of it. In fact the only thing that marred the start of our day was Hev and my walk to the wedding being blocked by a man having a wee in the close next to our flat. Blind drunk at midday on a Monday, then trying to usher us along the path with a piddling willy. Welcome to Edinburgh.

After a rest, we were back for the evening event, with the speeches and the cake, in the Night Club of the GB, an event which spilled out into the GB's courtyard dining area, where again we chatted to new friends and old (the team from the DC fancast among them). Speeches were excellent, the wedding cake was a tower of cupcakes, and all this, along with Bec & Gav's first dance which we missed as I had to go prep for my show, was streamed live. 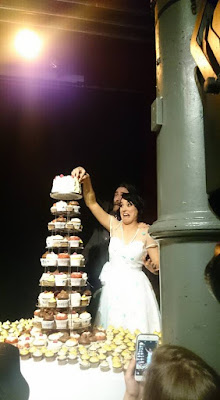 I then did my show, which Hev came to for the first time and confirmed it is indeed as good as I keep saying (we had reviewers in and got at least one 4 star review, thankyou very much), then home to change and back out for a sweaty old dance, my first time on the dance floor since I can't remember when.

Well, it's clearly the first time I've danced since I started wearing reading glasses. I know this because I had them in my breast pocket, danced them out of my breast pocket, and didn't find them until a few other people had had the chance to dance on them. One lens is still intact, so I'll be reading half as much for a while. (I have a spare pair with me, I'll live).

I even got to see the famed Abbatoir bar for the first time, courtesy of Helen and Elliot of Nottingham Comedy fame who guested me in there. It's alright, if you like comfy looking private bars made out of shipping containers, and I'm sure that when it's full of celebs it's quite the place to be. But after the star studded day we'd all just had, it could hardly compare.

Happy Weddinburgh Bec and Gav (as you can see, I made them a card), and thanks for a great day.