Harry Potty - a month of comics by kids 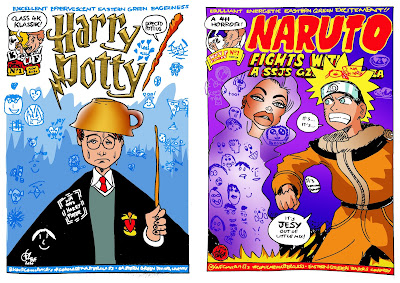 It's taken a month, but I'm happy to be able to post another collection of eight comics produced with kids in my Comic Art Masterclasses. And, for the first time since March, they include actual classes, taking place in real life, face to face with actual kids in a genuine classroom. Above are the first two to have come from a full day in a school, Eastern Green Juniors in Coventry. 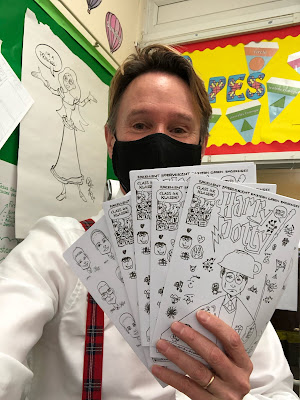 Here we see the first comics run off on a photocopier since March. I still know how to do it, and they look great. Sadly my other live classes, which began at Backwell school with hour long after-school sessions with yr 7 & 8, only lasted a week in the real world before moving online, using the awkward and frustrating Microsoft Teams (not nearly as good as Zoom, I find). These have been a challenge because, instead of my usual concentrated 2 hour session which results in a simple comic, I'm doing 4 hours with each group. Their first two comic covers and caricatures are complete, and look dandy. 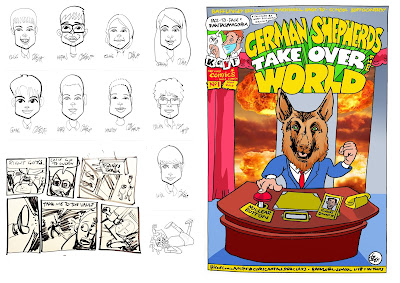 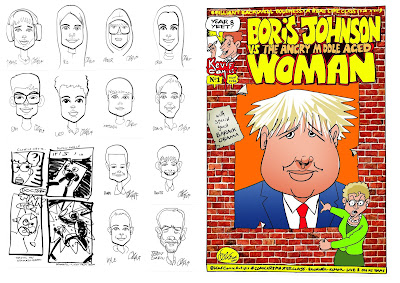 September was almost entirely classless, with just the one on September 1st, and October started off pretty quiet too. Schools, when I approached them at the start of term, had so much to cope with, returning to work for the first time in months, that a novelty like mine was going to be low on their to-do list. It wasn't until the Half Term holidays at the end of October that Zoom classes happened again. 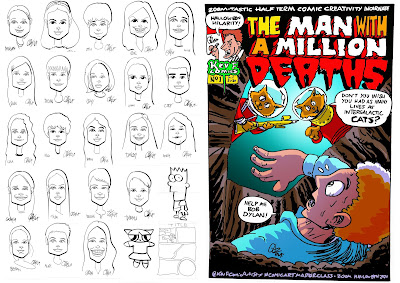 The first such class being one organised by me. On the instigation of comedian Zena Barrie, who simply asked if there would be a class at half term that her daughter could do, I set one up. And, having found it difficult to attract a crowd for my last attempt in the summer, this time we drew a healthy throng, who come up with a suitably Halloweeny comic title. 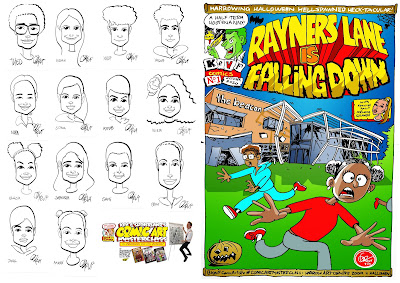 Harrow Arts organised a second class at The Beano centre on Rayners Lane, which involved the kids watching me on the big screen. That's an interesting way of working, in contrast to the individual-screen model I mostly do with Zoom, and once again got good results and sent away a group of happy teenagers. 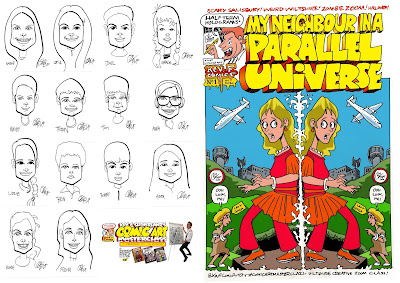 Wiltshire Creative organised their class from Salisbury Arts Centre, where I've worked many a time in person. A fun example of how the comic I draw and email back to the kids is very much finished after the fact. Whereas, in the actual classroom, I have to get the cover drawn in the duration of the session in order to get it on the photocopier (see Harry Potty above, including the kids' own contributory scribbles), in these virtual classes I spend more time attending to the kids, and just do enough drawing on the cover to show them what I'm doing. In this instance I then did the colouring, and the mirror-imaging in Photoshop, giving them a nice virtual takeaway to print at home. 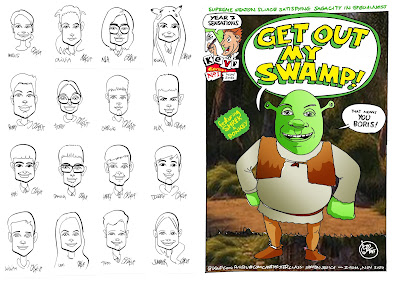 Gil at Hexham Book Festival, who's taken me up to Northumberland to do my sessions innumerable times now, managed to get two schools to have me in for Zoom sessions this week. Sadly only the Seaton Sluice class, above, was able to go ahead. The Tweedmouth classes had to be postponed because, adding complications to complications, some classes had to self isolate, disrupting their plans. It's a difficult world schools find themselves in, and my heart goes out to all of them. Meanwhile I have a couple of dates scheduled for virtual classes and one invitation to a real life school in January, and I dearly hope to get some dates back in my diary in the new year. 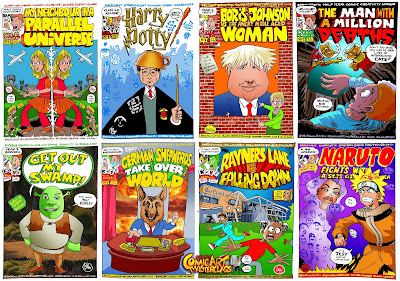