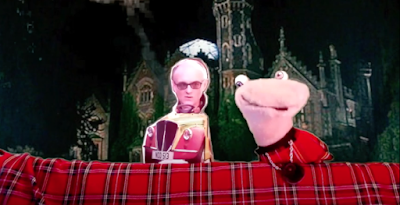 Thanks to everyone who came along to the Socks' Hallo Ian Special on Zoom on Friday October 30th, it was our best attended show since the summer, and far and away the best received I think. It was so choc full of new material - much more than September's New Material Night for instance - that, including a special guest appearance by Dean Friedman, it ran to an hour and ten minutes, and was followed by the most enjoyable after-show chat yet.

The full running order is below, with links to the individual clips that I've posted since. The full show is up there to be found too, though I've only sent the link to ticket buyers, which seems fair. Our next show is the Xmas Special on December 11th, which I'm delighted to say Dean has agreed to guest on too.

HALLO IAN SPECIAL Running Order
Intro gags
I'M A SOCK song (on video, as are all songs. During this we found a problem with the video clip's sound not playing, I'm still unsure why. Luckily, during the course of the number, I fixed it, as the rest of the show was heavily reliant on its musical numbers)
Hitchock gags
ROCKY HORROR 2020 MEDLEY - Highpoint of the show, if an opening number can be that. It's been the most commented on, and watched online since. I must say I'm rather proud of it too.
LOVECRAFT - New sketch, quite fun. Could go in a live show, though hard to glean from a Zoom show where the laughs are coming.
4 HORSEMEN's HORROR CLICHE song - A classic from Boo Lingerie, reperformed for the night. Always good.
CARRIE - New sketch, first performed for a private request birthday party (for a Carrie in fact) last month. Good.
TALES FROM THE CRYPT song - Brand new, and one I love. Liked by the comics fans in the audience.
Shakespeare gags & TITUS ANDRONICUS - A bit from our Shakespeare show, good as always.
MONSTER MASH - Another brand new musical number, I was really pleased with this, could defo go in a live show.
DEAN FRIEDMAN guest slot - Dean played The Babysitting Song and Scratch & Bite, both obscure numbers with a Halloweeny vibe.
Friends routine - linking material building up to a later gag.
BRIGHTER SHADE OF MAKE UP - Brand new song, the least Halloween-themed of the night, another good un I think.
HALLO IAN - The classic sketch, that we've been doing our whole career, and that we'd been teasing throughout the show till now. The Socks fall out at the end of it, leaving only the Sock On The Right, who says "Where's Dean Friedman when you need him..?"
LUCKY STARS - The Socks duet with Dean Friedman, built up to by the earlier Friends material (about Lisa Kudrow, stumbling over Cliff out of Cheers. It makes sense in context)
PHANTOM OF THE OPERA - The grand finale. Done as a video clip some years ago but never done live, I think it works and could find its way into a live show.


So, quite the new show, though I say so myself. It's certainly more complete than the set we took to the Leicester Comedy Festival back in February. With the exception of a few revivals (4 Horsemen, Titus Andronicus, and Hallo Ian) and two bits that had been tested before (Carrie and Phantom), that was all new material, written in the last month. If we can do that again for the Christmas show, and whatever we do over the coming months, we're going to have a lot of stuff to choose from and develop when it comes to working live again. (On which subject, the 2nd national lockdown was announced on the day after this show, suggesting our Fingers Crossed Tour this winter might not happen. Hence, of course, the name. Update: Immediately after posting this blog on Monday morning, I read that Nov 7th's Birmingham show is cancelled. 4 more to topple, in Bath, Clevedon, Lichfield & Barton). 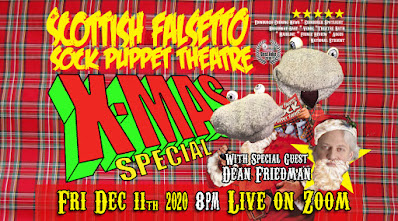